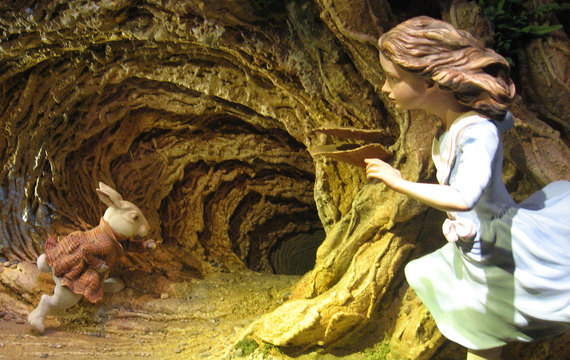 One of the pleasures of growing older is realizing that your favorite children’s stories were inspired by drugs. Come on, all those cartoons you watched? So. Many. Drugs.

In the case of Alice in Wonderland — in which our protagonist Alice even eats a mushroom, for Pete’s sake — you probably assumed it was a given truth. Well, not so fast. It turns out that Alice in Wonderland’s relationship to drugs is a misconception; it’s never been proven that Lewis Carroll ever took mind-altering drugs.

This is one of many truths presented at a new exhibition, Alice: 150 Years of Wonderland, currently showing at The Morgan Library & Museum in New York City. Carolyn Vega, the curator of the new exhibit, told Van Winkle’s she included the tidbit about Carroll and his sobriety specifically because everyone always makes druggy assumptions.

“It’s a misconception that we have, especially because the story has been so appropriated in the ‘60s by counterculture movements,” Vega said. “It was identified, really, with drug-taking and LSD and hallucinations at that time. I guess it’s best said that there’s no evidence that Carroll was taking mind-altering drugs.”

Carroll’s diaries, which are on display at the exhibit, make no mention of drugs. We know that he occasionally enjoyed a glass of sherry and may have taken opiate-infused drug Laudanum (which was readily available to everyone in the 1860s). Other than that, there’s nothing connecting Alice and drugs.

Here are three more interesting facts about Alice in Wonderland, courtesy of Carolyn Vega and her fascinating exhibit:

Lewis Carroll and Alice in Wonderland have gone by many different names.

Like J.K. Rowling and C.S. Lewis, “Lewis Carroll” is a pen name. The author’s real name is Charles Lutwidge Dawson.

“It’s a play on his first two names, ‘Charles’ and ‘Lutwidge,’” Vega explained. “When he was coming up with this name, he gave his editor a few options to help him pick the best pseudonym. One of the other options that he gave was ‘Edgard Cuthwellis,’ which is a terrible pseudonym, so thank God his editor picked ‘Lewis Carroll.’”

“He went through a couple of other titles,” Vega said. “Alice’s Hour in Elf Land was one. Alice Among the Goblins. He settled on Alice’s Adventures in Wonderland, which now is usually just shortened to Alice in Wonderland.”

We owe a lot to the real Alice.

The real Alice was a 10-year-old girl named Alice Liddell, who befriended Carroll when he was attending Oxford University. As the story goes, Carroll made up the story of Alice while entertaining her and her two sisters on “one golden afternoon.”

“She asks again and again and again for the stories and for it to be written down,” Vega said. “It’s only because of this little girl’s absolute persistence in not letting it go that we have the story today.”

According to Vega, Alice Liddell grew up to live a “pretty conventional Victorian life.” After her husband died, she found herself facing financial difficulties and was forced to sell Carroll’s original manuscript that he had given her as a child.

“She had it for almost her entire life,” Vega said. “She was a little girl when she received this manuscript, and it was only near the end of her life that she parted with it.”

The “puppy” in Alice holds a lot of significance.

There are many iconic characters in the Alice stories: the White Rabbit, the Cheshire Cat and the Queen of Hearts, to name just a few. But one of the less iconic characters — the Puppy — actually has great significance in the story’s dreamlike narrative.

“This puppy, or small dog, is actually the only character that doesn’t speak to Alice,” Vega said. “There are some scholars who have said this is a moment where Alice almost wakes up from her dream. It’s almost as if a real puppy has sort of come into the physical, real world when she is asleep and dreaming, because it’s a different kind of interaction than she has with any of the other characters.”

There have been many intense scholarly examinations of each Alice character, particularly those inspired by real people.

“Sometimes we can pin them down to real people, or sometimes they have a pretty good idea of who the character might be based on,” Vega said. “But the Mad Hatter, for instance — so many people have been proposed as the inspiration for this character. We can’t pin it down onto a specific person.”

Real or fictional, one thing is known: Alice in Wonderland remains one of the world’s most enduring, significant creations.

To see the history of Alice in Wonderland in person, visit the Alice: 150 Years of Wonderland exhibition, running through Oct. 11.