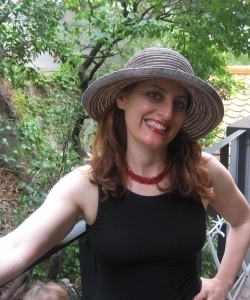 I was marching next to men in business suits and mothers with children, girls dressed like Lolita and elegant grandmothers in kimonos. My husband's college friend had invited us to join the rally. Both had been active in progressive politics at Keio University, one of Japan's top colleges, decades ago. I've been married for 17 years, but this was the first time I'd ever been to a political rally with my husband. This is how we live, two months after 3-11.

Friends had advised us against going. The ultra-trendy shopping district of Shibuya had a high level of radiation, they warned, and atomic rain measuring 18 millisieverts was falling. If you take your son, they admonished, wear protective gear and masks. We checked the radiation levels through a non-governmental source on the Internet, but the levels were normal. "If Shibuya is radioactive, masks aren't going to work," my husband said, putting our six-year-old son on his shoulders and heading out the door.

In the two months since 3-11, I've had hundreds of conversations like this. I've watched myself waver between fear and faith, panic and acceptance. Just after the catastrophe, I combed the internet, scoured Facebook, fended off the emotional opinions of friends daily. Some were very clear that it was time to leave Japan. Others insisted on staying. Many fell somewhere in between, agonizing about what to do. Terms were bandied about like "flyjin" and "sheeple." ("Flyjin" is a play on gaijin, the less-than-polite Japanese word for "foreigner." "Sheeple" needs no explanation). Over the past few months, I've attended sayonara parties and availed myself of items my departing friends wouldn't be needing in their coastal retreats in New Zealand or while teaching English in Borneo. I've watched friends make themselves sick with worry long after they'd left. One even had a stroke from stressing out about the news, though he'd moved back to Europe. 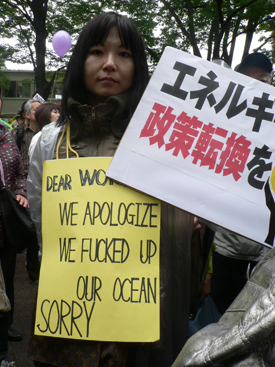 In the first two months, I questioned my decision to stay. After all, it wasn't just about me. I had a young son who was about to start elementary school. But on April 6, the rest of his classmates started school without incident. None of the other 40 kids missed the entrance ceremony. On May 5, my husband flew the traditional carp kite decorations from the balcony of our house, celebrating Children's Day. He bought iris stalks and put them in the bath at night, a traditional ritual believed to make kids healthy and strong. If I'm staying, I reasoned, I might as well do something useful rather than sit around and complain. Hundreds of thousands of people remained homeless, stranded in shelters without necessities, and no clear future. There was work to be done.

Yesterday, as uber-cute Japanese idols, green-haired punk rock bands, folk singers and activists took the stage to rally the crowd, I thought about the strange trajectory of my life. I grew up in Berkeley in the 1960s. Berkeley is one of the most diverse and progressive places in the world. It's more than ironic that I ended up in Japan, one of the most homogenous and socially staid. But the Japanese people have paid a price for their political apathy. That price became enormously clear in the aftermath of the March 11 earthquake, tsunami and nuclear disaster.

Since the economic bubble burst in the 1990s, many Japanese--especially the young--have been floating aimlessly, drowning in boredom and consumerism. The catastrophe has woken us all up. We can no longer stand by and watch others misery helplessly. It just won't fly. "Dear World--We apologize we fucked up our ocean. Sorry," one girl's homemade banner read in English. When I took her picture, her face was grim.

Sure, some things are different. The milk we get from the organic food coop now comes from Hokkaido, not Tohoku. We check radiation levels before going out. We eat konbu to protect our thyroid glands, and drink a bit more miso soup than before. We know words like millisievert and microsievert. We turn off the lights and read by candlelight. But the main difference these days is that when we look around, what we see is activism. It's something I hadn't seen before in the decade I've lived in Japan. 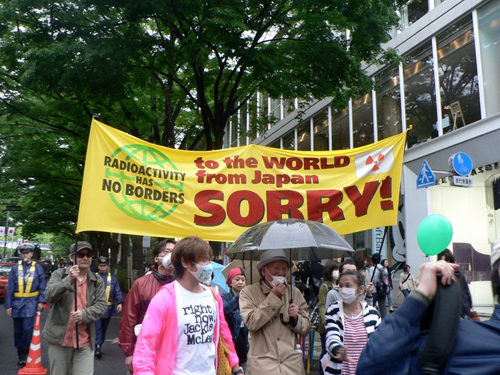 Again, we consider those directly affected by the disaster. Friends are volunteering to help in the affected areas, traveling at their own expense, sleeping in tents to help remove sludge and debris, scooping up tons of dead fish, delivering supplies, offering counseling, entertainment, healing, homes to abandoned pets and whatever else is needed. Invitations to fundraisers, clothing and food collections, auctions and charity events flood my in-box daily. My own yoga studio has sponsored several fund raisers and collections, raising tens of thousands of dollars and gathering much-needed supplies for those in need. As one blogger wrote, "There is a sense that the people are standing up, taking this as an opportunity to rebuild their nation, this time with their own hands."

For Japan, the events of March 11 were a wake-up call, just like the earthquake in Haiti and the flooding of Katrina. For myself and many others, the March 11 disaster woke us up to our mortality, our fragility, and our interconnectedness. Experts say there's an 87% chance that an 8.0 magnitude quake will hit Eastern Japan within the next 30 years. Knowing that our time on this planet is limited, we're finally asking ourselves: How will we best use it? We admit: we've been greedy, and stupid, and selfish. Now is the time to come together. Mother nature: we get it.

Leza Lowitz is the award-winning author of Yoga Poems: Lines to Unfold By and the forthcoming Yoga Heart: Lines on the Six Perfections. She lives in Tokyo, where she runs Sun and Moon Yoga. Her work will appear in The Best Buddhist Writing 2011. Read her blog on Red Room.