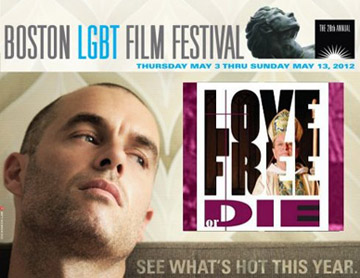 In this audio montage I talk with Bishop Gene Robinson and director Macky Alston about their groundbreaking documentary, Love Free or Die. Then I speak with director Wendy Jo Carlton about her film Jamie and Jessie Are Not Together, and I conclude the first part of this two-part audio interview series with director Brendan Fay, discussing his documentary Taking a Chance on God. I also talked with the filmmakers about crucial issues facing our LGBT community. All these filmmakers will be present with their films at the Boston LGBT Film Festival, which runs May 3 to May 13.

Love Free or Die was the winner of the U.S. Documentary Special Jury Prize for An Agent of Change at the 2012 Sundance Film Festival. The film follows Bishop Gene Robinson, who came under fire in 2003 when he became the first openly gay man to be elected to the position of bishop in the Episcopal Church. Since then, he has battled for LGBT people from small town churches in New Hampshire to Washington's Lincoln Memorial to London's Lambeth Palace, as he calls for all to stand for equality, inspiring bishops, priests, and ordinary folk to come out of the shadows and change history. Love Free or Die will be presented at the Brattle Theatre in Cambridge, Mas. on Monday, May 7 at 7 p.m. I talked with Bishop Robinson and director Macky Alston about the film and their commitment to LGBT equality.

When asked about his personal commitment to LGBT civil rights, Bishop Robinson stated:

For me, the impetus for this is both religious and secular -- that is to say, I came out in 1986 when I was 39 years old, and I was a priest of the church, and it was clear to me that religious institutions -- Judaism, Islam, Christianity -- were really responsible for 95 percent of the discrimination that we experience. Even non-religious people in the culture use religious reasoning to argue against us and keep us from our full civil rights. I felt that I had a foot in both communities, the religious community and the LGBT community of which I was so proud to be a part. I felt a special calling to try to reconcile these two groups, and to get the church to see how it had been oppressing for 2,000 years, and to see what I could do in my own small way to change that, to both change the church so that it became not just tolerant but embracing it and celebratory of us, to say to the LGBT community, "You know, the church has not served you well in the past; in fact, it has been abusive of you, but there are Christians and Jews and Muslims who will welcome you and help you answer your own spiritual needs, and the religious institution you left years ago because you were treated so badly might be the place for you now."

With over 40 feature-length films at the 28th annual Boston LGBT Film Festival, there is also a number of dramas, comedies, and musicals telling our stories. From director Wendy Jo Carlton (Hannah Free) comes the romantic musical comedy Jamie and Jessie Are Not Together. I talked with Wendy Jo about the film, which tells the story of two queer girls whose codependent, loyal friendship is fraught with erotic tension. It is based on Wendy Jo's own experiences of loving the wrong women. Jamie and Jessie Are Not Together will be presented Saturday, May 5 at 6 p.m. at the Brattle Theatre in Cambridge, Mass., and Wendy Jo will be available for a Q-and-A session following her film.

Finally, I talked with director Brendan Fay about his documentary Taking a Chance on God. The film tells Jesuit priest John McNeill's inspiring story of faith, love, and perseverance in the face of oppression and rejection. McNeill is the cofounder of the LGBT Catholic group Dignity NY. Taking a Chance on God, which will be shown at the Museum of Fine Arts in Boston, Mass. on Sunday, May 6 at 2 p.m.

On Monday, May 7 at the Brattle Theatre in Cambridge, Mass., following Love Free or Die, there will be an important panel discussion on the roles that sexual identity and religion play in our community, with Brendan Fey, Bishop Gene Robinson, and Macky Alston, as well as Rev. Patrick S. Cheng, Ph.D. (Assistant Professor of Historical and Systematic Theology at the Episcopal Divinity School) and Alex Kapitan (the Congregational Justice Administrator for the Unitarian Universalist Association).