Religion has not always been kind to the LGBT community. Signs like the one ATLAH Worldwide Missionary posted outside its church in Harlem, New York capture the discrimination many LGBT people have faced in religious congregations -- and it is not hard to see why a significant number of people are leaving religion over anti-gay policies.

LGBT adults in the U.S. are considerably more likely to identify as non-religious than their non-LGBT counterparts, Gallup found in an August 2014 survey. Forty-seven percent of LGBT adults say they are non-religious, compared to 30 percent of non-LGBT adults, and the difference only increases between LGBT women and non-LGBT women -- 46 percent to 25 percent, respectively. 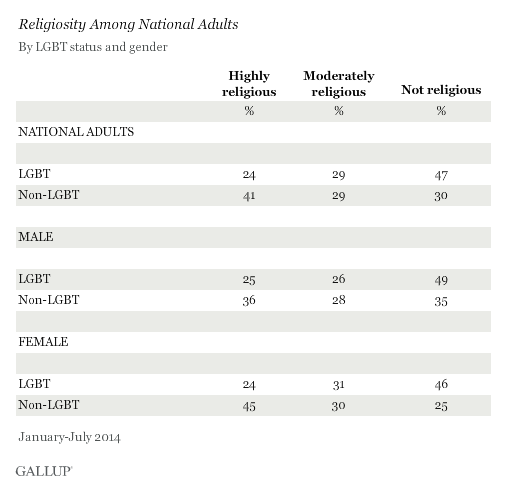 The Public Religion Research Institute (PRRI) published a study in February that found that one-third of millennials who left the religion they grew up with did so due to "negative teachings" or "negative treatment" regarding the LGBT community.

LGBT issues, rather than faith, has played a major role in pushing people away from the church, PRRI found. Gallup's findings may suggest the same, as within the "moderate" category the percentage of LGBT and non-LGBT respondents meet.

The LGBT community is split almost in half between those who say religious is important in their daily lives and those who say it is not. 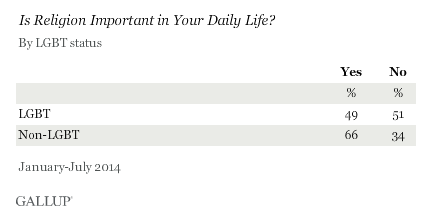 In every age group, as well, the percent of moderately religious individuals is roughly the same for LGBT and non-LGBT, and the divide between the two in the highly religious category decreases slightly with age. 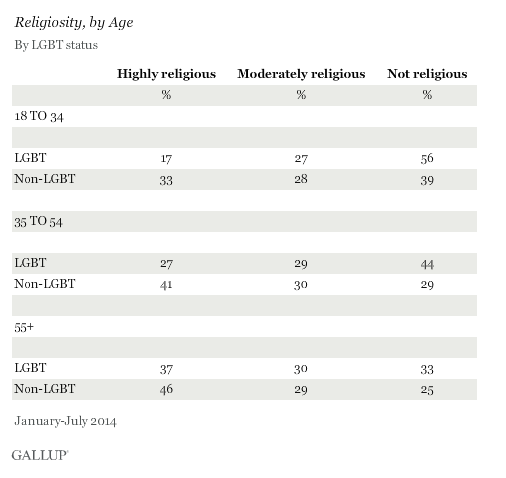