America is going through LGBT civil rights boot camp, and it's making our society stronger. Change, like recruit training, is hard. The results are worth it.

Recently joining our ranks in the march to equality: SCOTUS, the Boy Scouts, the Pentagon and Caitlyn Jenner.

When I was a kid I marveled at Jenner as she competed on TV in the Olympic decathlon, I had no idea she suffered from body dysmorphia.

You think it took bravery to eat the first oyster? Try being Caitlyn Jenner, living a famous, accomplished life while secretly knowing she was in the wrong body. When Caitlyn came out as transgender, she turned heads (some sideways) and opened minds. Soon after, the Pentagon announced that the military will allow transgendered people to serve.

Caitlyn would make a fierce Marine; I'd be proud to hunker down in a foxhole with her.

I say that as a former Marine. And I'm proud that current military personnel can serve their country regardless of their sexual orientation.

But equality wasn't built in a day. It's important to identify and remember the bricks we laid on the path to LGBT civil rights. Of course we should celebrate the repeal of "Don't Ask, Don't Tell" and the fall of DOMA, but we must remember what living through that time was like, especially without any public heroes. That pebble in our path warrants discussion.

When I was an underweight and insecure nineteen-year-old, I enlisted in the pre-DADT Marines. To mask my insecurity, I shook hands firmly and met the recruiter's eye. To meet the weight requirement, I taped a lead weight to my crotch. And to get past the fact that I was gay, I lied on the enlistment papers about my sexuality. I had to; being gay in the military was illegal.

Growing up in the 1970s, I had no gay heroes -- because there weren't any. Television portrayed us as flamboyant jokes. I didn't feel that represented what I wanted to be when I grew up.

If gay people made the news, often the story focused on a crime of which they were accused (by merely being themselves). Gay pride was a secret thump in men's hearts when an Elton John song came on. Any forward movement was a handcuffed walk of shame. Out was not in.

As a kid, I was too nervous to participate in school sports. What if they called me gay? I felt my different-than-everyone-else's sexuality was obvious, no matter how well I hid it. I was small and weak, which made sense because I never went to gym class. Self-doubt is a vicious circle. I'd rather be thought "less than" than lisp onto the football field and remove all doubt.

How was I supposed to feel good about myself when my sexuality (which had not yet been honed to perfection) was condemned by society? I felt nice and kind and smart and funny and rejected and hated and afraid. That internal struggle causes pain I wish on no one.

But I survived and thrived in the Marine Corps. As I trained with my platoon, I learned that everyone came in bearing some sort of a burden. Whether it was weight shame or an educational deficiency or a head shaped like a basketball--they locked that shit up. We all had to march to the same beat.

My fellow Marines were -- and are -- wonderful to me. They didn't ask if I was gay. They also never asked for my pecan pie recipe. It's an awesome recipe, but it has the same relevance to my military service as my sexuality does. 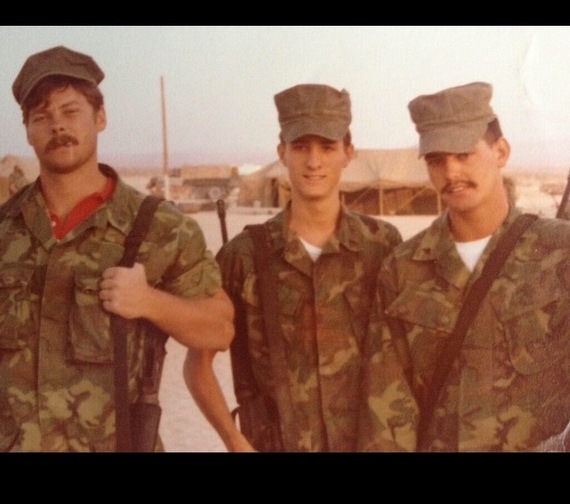 I believe it's necessary to tell the stories of how our LGBT brothers and sisters went from handcuffs to heroes. It wasn't overnight, and it wasn't without loss. As we clutch the bouquet of congratulatory roses to our chests, a few thorns still prick us.

But we march ahead. We're being noticed for how well we do something without the fear that we shouldn't even be allowed to try.

It's important for us as a society to learn that if a person is qualified for the job, and wants the job, he'll do a good job. So now Boy Scout leaders can be gay. Duh. If anyone wants to sacrifice his time and energy for the betterment of mankind, let him. It's difficult getting anything accomplished. If someone volunteers, grab him. And say thanks. That goes especially for gay and transgender members of the armed forces.

One of the greatest gifts I received from the Marine Corps is camaraderie. I may no longer look like a typical Marine. My hair isn't regulation length, and I wear every color but green. Yet I proudly extend my hand to any current or former serviceman. In a flash, we reach a solid bond over common experience, free from any mention of my sexual preference.

I served six years and achieved the rank of sergeant. I trained to defend America against bullies--vast nations of horrible bullies. I fought to secure my rights, and yours. With nothing expected and no questions asked.

Don't you dare hate me with the idiocy of prejudice. Get to know me, then feel free. This is America.