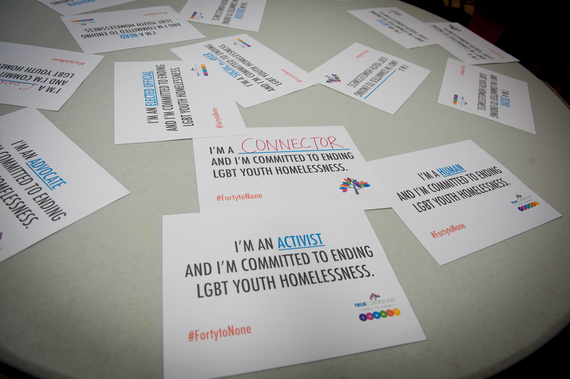 On September 30, the True Colors Fund held the first Forty to None Summit, a national gathering to discuss and strategize ways to end LGBT Youth Homelessness. It was fantastic!

At this point, many of us have heard the statistic that up to 40 percent of youth experiencing homelessness identify as lesbian, gay, bisexual, or transgender (LGBT), whereas only approximately 7 percent of the general youth population identifies as LGBT. We've also heard that the most frequently cited reason for their homelessness is identity-based family rejection. And we've heard that service providers all over the country are reporting more and more LGBT young people in their programs, particularly young people of transgender experience.

I often have to preface what I'm about to say with these statistics, in order to get people's attention. In order to get people to understand why we need to talk about this. Not everyone gets it. The reasons are varied -- some people carry unexamined negative stereotypes about people experiencing homelessness, housing instability and poverty; others would rather be in denial that so many LGBT young people are unstably housed; and many folks may not see how this issue has anything to do with them. I wish that wasn't the case, but it is. So, even though you've heard those statistics already, still very little has been done to prevent LGBT youth homelessness and to intervene quickly when it does occur.

I'm frustrated that 8 years after the National LGBTQ Task Force released their report calling LGBT youth homelessness an epidemic, we are still having the same conversations. We are still fighting each other for limited resources. LGBT young people in some parts of the country still do not have access to services that respect -- much less affirm -- their identities. And even though they make up to 40 percent of youth experiencing homelessness, LGBT youth are not yet protected from discrimination in the Runaway and Homeless Youth Act.

I'm here because this work matters. Because Angel, Star, Bengy, Charlie, Paris, Shawn, Brian, Angelica, Bianca, William, Destiny, Joey, Brittney and the thousands more LGBT young people surviving without a home today matter. But they might not think they do.

I know I didn't. When I came out, and was kicked out, and spent the next few years struggling to find stability, periodically finding myself on someone's couch... again. I didn't think I mattered.

I'm here because I remember what that feels like.

And it is time we start to talk about it. In a deeper way. So we're not just talking about family rejection, but we're also talking about how segments of our society sanction it. So we're not just talking about putting more beds in homeless shelters, but also preventing our young people from needing those beds to begin with. Let's talk about how our systems often fail LGBT youth and let's talk about poverty and how youth of color are overrepresented. Let's talk about what we're doing to challenge the institutionalized oppression that makes it incredibly difficult for a young person of transgender experience to get a job, to move through Runaway and Homeless Youth (RHY) programs, to gain equal access and to have an equal shot at the future they deserve.

And then let's do more than talk, let's do.

The more I speak about my own experiences, the more others working in homeless services or in the LGBT movement have confided in me about their similar experiences. And it occurred to me that when we talk about LGBT youth homelessness within the LGBT movement, we don't talk about how this is an issue for us. Personally. We are not acknowledging that so many of our current LGBT movement leaders experienced homelessness, were kicked out or pushed out of their homes. Rather, we talk about "helping the kids" and in so doing, we create an us/them dynamic that distances the reality of many of our experiences and forecloses opportunities for connection between current movement leaders and LGBT youth who may be struggling with housing instability. This is not an us/them issue.

It took me a long time to be out about my experiences. Because I spent so much time trying to make that part of my past not matter, I had not considered the potential impact, or how my experiences could actually matter to someone else. Part of the hiding, for me, was about the minimization and denial of my experiences, part of it was about social work training related to boundaries and self-disclosure and much of it was about shame. What would other people think? Would people look at me differently? What if my family became aware I was speaking out, and, after years of careful mending, those relationships were severed again?

Guess what? I am not alone. Check out these amazing leaders (including our new Program Manager, Twiggy Pucci Garcon).

At our Forty to None Summit, the room was full of people who change lives. Everyday. Young people, service providers, advocates, social workers, philanthropists, educators, researchers and health care workers -- rock stars, all of them.

It takes all of us working together. Collaborating. Innovating. Together we are changing the conversation, we are building a movement and we will end LGBT youth homelessness. 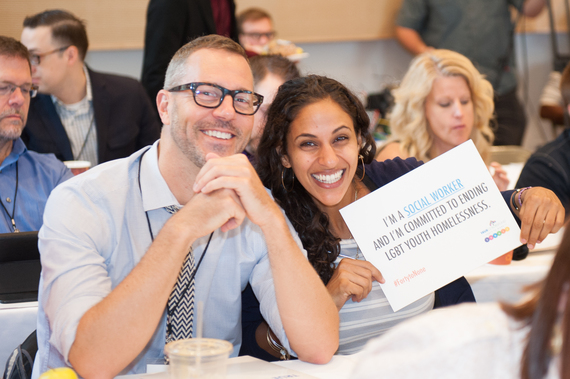