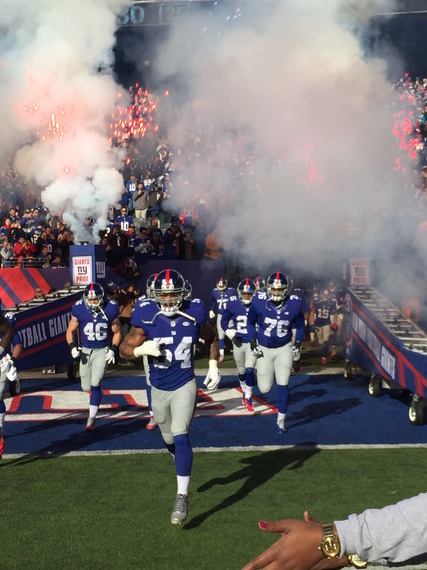 As the smoke rose, the crowd cheered, and the stadium music got louder, the Giants players emerged to enter "the gauntlet." In the beginning of each game, the gauntlet is formed by two lines of people who enthusiastically high-five the players as they burst out onto the field.

This past Sunday, in collaboration with You Can Play and the Hetrick Martin Institute (HMI), the New York Giants hosted a special game-day event for LGBT youth.

The 30-plus 'at-promise' LGBT youth from Newark, NJ took the field and created the gauntlet for the Giants players to run through as they entered the field.

Ashawnda Fleming, Executive Director of HMI in NJ, described it as an "absolutely amazing" experience. "The young people were in awe during the gauntlet event on the field. The entire day was priceless!"

"The excitement of being in the Giants' stadium, hearing the roar of the crowd and actually standing on the field with the players undoubtedly created amazing memories for all of us," says Commissioner Julie Muller of the NAC (North Atlantic Conference), a partner conference of You Can Play. "When I was a closeted, college athlete 30 years ago, I couldn't ever imagine that I'd one day be celebrating my identity at the Giants' stadium."

This past October, the Giants made history by becoming first team in the NFL to make a You Can Play video, a PSA dedicated to promoting the values of respect, inclusion, and as a way to voice the team's support for the LGBT community.

Less than two weeks before this Sunday's game, Giants long snapper and co-captain Zak DeOssie along with tight end Jerome Cunningham met and spoke with LGBT youth at HMI in Newark. DeOssie and Cunningham were also joined by the Giants' assistant general manager, Kevin Abrams, who praised the HMI staff and the youth for welcoming the Giants into their space: "We all learned a lot about each other. We discussed our backgrounds, our challenges, and our triumphs."

"We found out that the safe space that HMI provides for their youth members is very similar to the safe space we have in our locker room. Both provide unconditional support," says Abrams. The intention behind bringing professional athletes and LGBT youth into the same space, whether it was at the HMI LGBT center or at the game on Sunday, was to show that we have more in common than we think. Youth and professional athletes all deserve and desire to have a safe space and to feel supported.

On Sunday, the Giants' You Can Play video, along with a new video about the Giants visit to HMI, were both looped on video screens throughout the concourse and entrances to the stadium. As fans walked around or waited in line for a soft pretzel or a drink, they got to learn about what this partnership has accomplished and about the Giants' commitment to the LGBT community.

At halftime on Sunday's game, a few of the guests spoke to the youth about their professional career successes, their personal identities, and encouraged them to follow their dreams while being true to themselves. For David Slade, National Manager of Marketing & Business Operations for USTA Foundation, this activity had a big impact on him: "Welcoming my favorite NFL team in front of 80,000 fans was a great experience but the highlight of the day was standing on the field alongside the young people from HMI. The youth may have come to hear advice from leaders of sport, finance, and business but I left a changed man inspired by their personal stories of courage and determination."

The events leading up to and during Sunday's game not only transformed the lives of the young people who attended, but these experiences were transformative for all of those involved, whether it was athletes, former athletes, staff, and community guests.

"Being a part of such an inclusive event hosted by an NFL franchise gives me a sliver of hope that teams are beginning to understand not only the value of diversity of all types, but specifically, that there are toxic ideas (of what masculinity is and isn't) and these need to be eradicated," explains Jamil Smith Senior Editor at New Republic and host of the podcast INTERSECTION. "I hope that not only did those young people attending the game with You Can Play understand they belonged on that field on Sunday, but that it is essential that they be there."

Groundbreaking is the best word to describe exactly what the Giants have done and continue to do. The Giants are the first team in the league to intentionally plan such an integrated partnership of training, PSA production, grassroots outreach with LGBT youth, funding, and game activation.

We believe that You Can Play's partnership with the Giants is an example for all NFL teams as they work to change the often homophobic and misogynistic culture of professional athletics. The NFL, along with many other sports leagues, still has a lot of work to do, yet our society as a whole, both in and outside of the sports world, also has to take on the responsibility for creating safer, more inclusive spaces.

For our group of LGBT youth and the adult participants, being part of the gauntlet only lasted 30 seconds, but the memories and that transformative experience will last a lifetime. 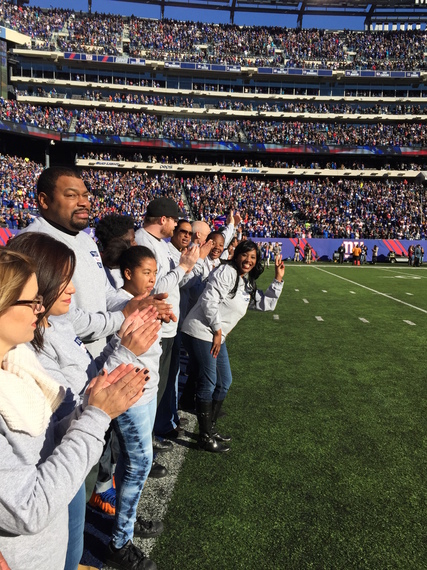