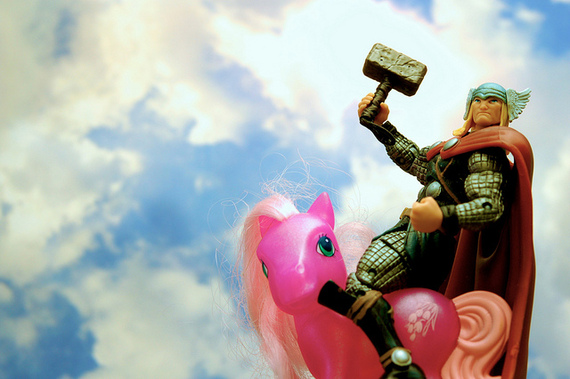 One Christmas, when I was around 15 years old, I found this amazing plastic hammer. When I picked it up, I was instantly transformed into 1970s Thor from the Marvel animated series and went around my cousins' house exuberantly proclaiming that I would "break down these walls with mine enchanted hammer." My cousins and siblings thought it was hilarious, as the game continued for hours upon hours and I was further spurned on to threaten that any villain who opposed me would "find death."

I retained some of that vintage Thor persona for a number of years after that. I was painfully shy in social groups but then around my own people I would over-energize, entertain and exasperate. My mam bore the brunt of this explosive energy, as I turned into type of teenager that listened to my CDs in the conservatory adjoining the kitchen.

I would loudly listen to '80s Boston Nu-wave punk bands like The Young Snakes, a little bit of Mansun and Kenickie and some really trippy film soundtracks and make lip-syncing, punk faces at her through the service window until she was ready to flip out.

When I noticed her getting particularly irritated, I would offer to put on something different and she would gratefully accept. The moment she would start to visibly relax, I would press play on something even more jarring, such as Aphex Twin. Basically, I was (British concern troll) Katie Hopkins, if Katie Hopkins was a tiny gay boy who used annoying music to irritate and offend instead of racist rhetoric.

Then one day, at around age 19, I changed. I was suddenly subdued and withdrawn and my mam was seeing (and hearing) less of me. I had found out that my boyfriend at the time at started seeing someone new and hadn't bothered to inform me about it. I wasn't 1970s Thor anymore or even musical Katie Hopkins. I was nothing.

I was now onto Billie Holliday and Stina Nordenstam (the third album) and was generally uncommunicative and disengaged. I was no longer taking obscene delight from the wav file I downloaded off Napster of Britney Spears cussing her crew out backstage in Rio. My mam was perturbed and oddly liked the new miserable me a lot less than the old annoying me.

She sat me down and told me that she missed 1970s Thor and that she could tell that something was wrong. We had never discussed my sexuality but she certainly knew I was gay. She had known my ex-boyfriend longer than I had and she had walked in to my bedroom on occasions to find him there, snuggled up with me in my bed. We'd decided not to make it a big deal because my mam is great like that. She created a very normal environment.

Mothers are spookily intuitive though. She asked me outright if something had happened between me and my ex-boyfriend and I blurted it all out immediately: "He's gone and started seeing someone new and didn't tell me. This guy is not even that good-looking, which is beside the point because I really liked him and I don't want to sound shallow but I thought we looked good together and it's not my fault if I'm not ready for penetrative sex!"

This was the first time that I ever saw my mam look absolutely lost and unprepared. She literally backed away and went "Hoooo-kay!" and that was the end of that discussion. I think she went to my sister to ask her to talk to me instead. Previous to this, the most useful sex advice I had got from my sister had been a problem page she showed me in the newsagent one day, where a girl wrote in to Jackie magazine because: "Help! I had anal sex with my boyfriend and we didn't use any Vaseline and now there are veins hanging out of my bottom!"

On more than one occasion after the non-talk, my mam lamented the change in my demeanour because 1970s Thor never really returned to his regular slot my mother's conservatory. I suppose it was one of those abortive rite of passage moments that never had a resolution or a forward plan of action. I remained miserable for a little bit longer and then I was out of my mother's life and starting my own.

Nobody had ever taught me how to be gay and everything I knew about gay sex, up to that point, was half-formed information or fairly extreme stuff in an underground smut connections magazine called Upzipped that I had found in the quarry one day when I was looking for my cat.

I was 24 when I finally lost my full virginity and it was the night I had first met another ex-boyfriend. I wasn't nervous at all because it all happened so suddenly. He was damn handsome, I lived nearby a party we were both attending and I was getting to the exhausted part of the night where I was tripping over strangers' coffee tables.

He took me home and I barely had time to admit that I was still half-a-virgin. I did tell him afterwards though and by the next morning we had agreed that although we weren't officially a couple, we were "shifting." N.B. Shifting is an intermediary phase for Irish people who are in between not being a couple and being an official couple. For the ensuing three months, I barely stopped having all of the sex that I could. I guess it was about time -- 24 is pretty old to be a half-a-virgin, right?

Thinking about it now, I can't even suggest where I would have got my sex education from as a young gay man. I had heard many theories: Some sources indicated that someone literally got peed on, others illustrated multiple women tying a man to a bed and applying ice cream to his willy, but generally it was: "Yer ma lies still while yer da just moves around on top of her." Ultimately, it was all stuff that was of no use to me.

Although I was awkwardly unaware of actual health and safety issues, my first information (specifically on gay sex) served to veer me away from enjoying my sexuality to the fullest, or at all. I was borderline abstinent due to an awkward combination of misinformation and subject evasion.

My lone heterosexual parent hadn't been equipped or informed to deal with my issues and my biology teacher in my very Catholic school had been a sweater-vested man nicknamed 'Spits', who would spray our eager young faces with his saliva every time he said the word "sex" during the two short weeks of (heterosexual) sex-ed. That's two weeks out of five long years of secondary school education -- I definitely couldn't have asked "Spits" -- besides my questions weren't strictly biological, I guess.

These days, I hope it's better for young LGBTQ people; that there is adequate signposting to impartial information and services that can address queries and concerns. I'd like to see a holistic social drive in facilitating sex education for heterosexual parents raising LGBTQ young people -- knowledge that they can disseminate to their offspring, if and when required.

Generally, I suppose systemic sex-ed in schools is getting more LGBTQ-inclusive but recent stats do show that there is still a lot more work to be done in this area, and that parents should nonetheless be prepared for any shortcomings in schools' sex-ed programs, particularly when it excludes their non-heterosexual teenagers. Very simply, more information means less trauma.

I think it hurt my mam to be ill-equipped to help me when I needed that advice and that those difficult and challenging aspects to who I was, turned out to be very much tied to things about me that she deeply cherished and couldn't maintain. I do know that I can't speak for everyone but I would have been very comfortable talking about sex with a parent, should they had been equipped with any actual information to give me.