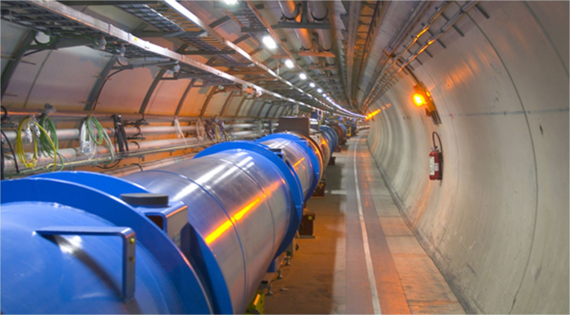 The Large Hadron Collider is the highest energy particle collider in the world and it has just passed an important milestone.

The world's largest particle accelerator, the Large Hadron Collider (LHC), located just outside Geneva, Switzerland, has recently passed an important milestone. For the first time since resuming operations, the accelerator passed an important threshold, with each of the two beams of protons carrying 100 million joules of energy each.

After discovering the Higgs boson in 2012, the LHC was shut down for two years for retrofits, refurbishments and upgrades. This last Easter, the world's largest particle accelerator resumed operations and with the ability to accelerate beams to an energy 60% higher than was possible in 2012. On May 21, the world was told that the LHC had hit [http://home.web.cern.ch/about/updates/2015/05/first-images-collisions-13-tev] the expected energy of 6.5 trillion electron volts per beam.

As impressive as that energy sounds, it is important to know that that energy is the energy carried by individual beam particles. It turns out that 6.5 trillion electron volts is about the energy of a mosquito flying at full speed.

However the LHC doesn't accelerate individual particles. It accelerates many at a time. During the commissioning phase, the accelerator operators begin by accelerating a small number of protons, starting with a single bunch with about 100 million protons. Over the last months, the number of bunches have been steadily increased until reaching over a thousand. This corresponds to about a hundred trillion protons and an accumulated energy of 100 million joules of energy. This is about the amount of energy needed to power your house for an entire day. 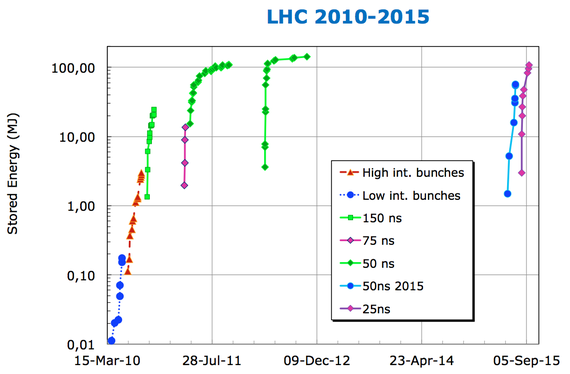 Scientists at the Large Hadron Collider passed an important milestone when they simultaneously accelerated two beams of particles, each carrying a prodigious 100 million joules of energy. (Figure courtesy: CERN)

This achievement, while noteworthy, is but a way station on the way to the design of 2,808 bunches and an energy of 362 million joules each. When both beams are combined, their energy will be enough to melt an entire ton of copper.

The LHC is currently delivering beam to the experiments arrayed around the ring. These experiments are studying the collisions between beams of protons trying to discover some of nature's secrets. And the future looks even brighter. While an impressive amount of beam is expected to be delivered in 2015, over the following couple of years, the LHC is expected to deliver four times as many collisions as was used to discover and characterize the Higgs boson. With that amount of data, it is quite possible that an even bigger discovery could be announced in the next year or two. Or not. As Yogi Berra is reported to have said, "It's hard to make predictions, especially about the future." However this recent achievement is an important milestone in making a discovery a real possibility.