Imagine someone traced their finger in the snow, switching between communicating a secret message and showcasing seemingly random scribbles. Now replace snow with gobs of gray oil paints, and you have the work of Liat Yossifor. 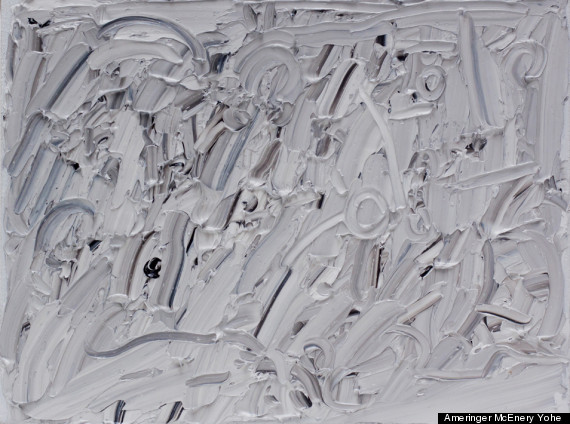 Yossifor, an Israeli painter now based in Los Angeles, devotes her newest exhibition to tracing thought patterns. Her monochromatic paintings do not depict her thoughts' contents but the very language of thinking, through whimsical twirls and violent fissures. Like thought itself, the end image is intangible and indeterminate; the lines designate no discreet forms, no certain messages. And yet you see every decision, every hesitation, every inch of doing and undoing, in Yossifor's careful knife work.

"Thought Patterns" are painted in one-shot accelerated processes. After the initial grayness covers the canvas, the artist goes to work with black and blue paint and a palette knife, scraping away secrets. The gray paintings look like ancient cave drawings inscribed in quicksand or murky fog, threatening to fade away before they can be fully grasped. The result resembles a mixture of king scribbler Cy Twombly and a young Jean-Michel Basquiat (if he were under the tutelage of minimalist queen Agnes Martin).

"Thought Patterns" is on view at Ameringer | McEnery | Yohe until November 10. To learn more about the artist, click here and here.