I have always been a liberal, even way back in elementary school. I can remember getting in trouble in fourth grade for getting angry during Ronald Reagan's first inaugural speech. I don't remember what I said, but I can tell you with great certainty that Mrs. Baxter was a Republican. She was not too happy with me and neither were a couple of my friends. Growing up, I had always heard that Republicans were cold hearted jerks, so I was shocked that some of my friends actually liked Reagan.

Shortly after he became president, Reagan suggested that ketchup should be considered a vegetable in the school lunch program. This was WAY before Michelle Obama was first lady. So, the school lunches didn't have many vegetables to begin with, and Reagan wanted to make it so a sugary, vinegary condiment counted as a vegetable. That qualified as cold-hearted to me. Even at age nine I knew that ketchup was not the same as broccoli.

Like a lot of kids in my elementary school, I lived in a low income household with a single mom. I qualified for the reduced lunch price, which was about half or the normal price. Sometimes, when I didn't have lunch money, the cafeteria ladies would give me a pity peanut butter sandwich. I usually wasn't the only kid in the cafeteria with the tell-tale little sandwich. Most of us were living in poverty or close to it. We didn't need LESS nutritious food.

While my mom has always been a Democrat, most of the family is Republican. Since I'm one of about three liberals in my extended family, I've been hearing all about this supposed "Liberal Agenda" for quite some time. I have heard that liberals don't work and want to live off of the government. I have two jobs and I have worked since I was 15. I have heard that liberals hate guns and want to take them all away. Nope. I have even heard President Obama being compared to Hitler. Um, really? 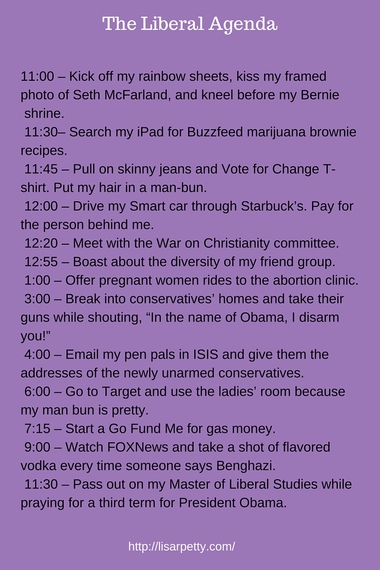 Lisa R. Petty is a former stand-up comedian who decided she would rather just write funny stuff than deal with drunk people touching her after shows. When she is not cracking inappropriate jokes, Lisa is an online English professor. You can read more of her snarkasm on Petty Thoughts. If you like humor and cat pictures, you can follow Lisa on Facebook, Twitter, Instagram, and Pinterest.