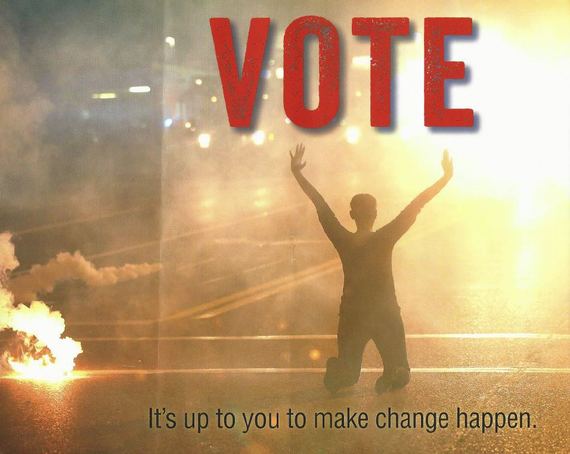 The New York Times last week ran its first front-page story of the season on political "race-baiting" -- except it raised questions about Democratic rather than Republican campaigns.

There are really three stories here. The first involves the decision by Democrats to campaign on racial issues. One example comes from a flyer circulating in Georgia that reads, over a photo of black children holding "don't shoot" signs, "if you want to prevent another Ferguson in their future -- vote."

Another comes from a radio ad funded by a group connected to Senate Majority Leader Harry Reid, which accuses the GOP Senate candidate in North Carolina, Thom Tillis, of backing restrictions on voting and opposing raises to the minimum wage. "Tillis even led the effort to pass the type of stand your ground laws that caused the shooting death of Trayvon Martin," the ad claims.

These efforts clearly seek to motivate black voters, reflecting the Democratic recognition that high turnout by African Americans in tight elections can mean the difference between winning and losing.

But do these efforts constitute racial pandering? Of the worst sort, according to the right -- and that's the second story here. Conservatives have seized on these ads as evidence of ugly racial pandering. A counter-ad in North Carolina refers to Tillis' opponent as the "race-hustling Kay Hagan," warning: "Desperate to hold onto power, Obama, Reid and Hagan are shamelessly race-baiting . . . Don't let the race hustlers win."

Under the headline "The 2014 Race Card," the Wall Street Journal also weighed in, editorializing: "Hope and change are long gone, so Democrats are now playing the race card to scare black Americans to the ballot box."

"One of the great tragedies of [Obama's] presidency," the editors lament, "is that he and the Democratic Party have used race for political purposes in ways that exacerbate tensions." They conclude, "Democrats do themselves no credit and the country no good by playing up racial divisions for partisan ends."

Admittedly, the Democratic ads sometimes shade into the hyperbole typical of campaign statements. But exaggeration is qualitatively different than race-baiting.

An obvious error looms here: Talking about race need not reduce to racial demagoguery. On the contrary, addressing race can advance society, because racial reform depends on understanding racial dynamics. As with every deep social problem, resolution requires frank engagement.

This spirit animates the Ferguson flyer circulating in Georgia. "Ferguson, Missouri's population is 67% African-American. But the city's mayor, five of its six City Council members, and 94% of its police force are white," the flyer says. "What are we going to do about it? If we want a better, safer future for our children, it's up to us to vote for change. The choices may not always be perfect, but the cost of inaction is simply too great."

Rather than corrupting democracy, this is its ideal expression: to confront disempowerment and oppression, the circular asks blacks to respond through the ballot.

An obvious strategy also powers the race-card rhetoric. Dog-whistling blasts out the core message that liberals pander to minorities, coddling them with welfare while refusing to enforce criminal laws or border security. In this vein, painting Democrats as race hustlers for talking about race constitutes standard fare -- it's just the latest dog whistle that depicts liberals as beholden to minorities.

This is not to say that Democrats never dog whistle -- they do, with a history going back to Bill Clinton's promise to "end welfare as a way of life" and extending up to the present, for instance in the willingness to join the Ebola scaremongering. In contrast, however, the focus on Ferguson, voting restrictions, the minimum wage, stand your ground laws, and Trayvon Martin steps toward much needed racial reform.

So did the New York Times say this? In an October 22 blog post, it got there partly, recognizing the propriety of connecting Ferguson to voting. But in its recent front page story, the Times reported that the race-targeted ads have "led Republicans to accuse Democrats of turning to race-baiting in a desperate bid to win at the polls next Tuesday," and them seemed to accept that frame.

The headline proclaimed "In Democratic Election Ads in South, a Focus on Racial Scars," where the invocation of "scars" -- rather than, say, "issues" -- shaded the ads' racial concerns as old, healed over, and being picked raw again. The piece also described the commercials as "coursing through the campaigns like a riptide, powerful and under the surface, largely avoiding television and out of view of white voters," and opined that "Democrats are seizing on racial mistrust and unease, the same complicated emotions often used against them in the South."

In this equation of racial issue ads with race-baiting, the Times keeps company with others outside the right. More forcefully linking the two, the journalist Errol Louis recently criticized the National Republican Congressional Committee for running a Willie Horton-style ad in Nebraska employing the visage of a "scary-looking killer, who is black."

But then Louis continued:

"And lest anybody think that only Republicans resort to racial dog-whistle politics, I refer you to Georgia, where . . . the state Democratic Party is sending black voters a flyer featuring two very young black children holding 'don't shoot' signs. 'If you want to prevent another Ferguson in their future, VOTE' says the flyer." Concluded Louis: "Democratic leaders will have no moral high ground and nobody to blame when, as day follows night, their adversaries someday snatch back the racial dog whistle and blow."

The 2014 campaign season is wrapping up with the right accusing Democrats of demagoguery when they dare talk about race -- and with liberals not only failing to recognize the "race hustler" assailment as another stock dog whistle move, but accepting and repeating the charge. Nothing could more powerfully testify to how far we have to go to defeat dog whistling than this.