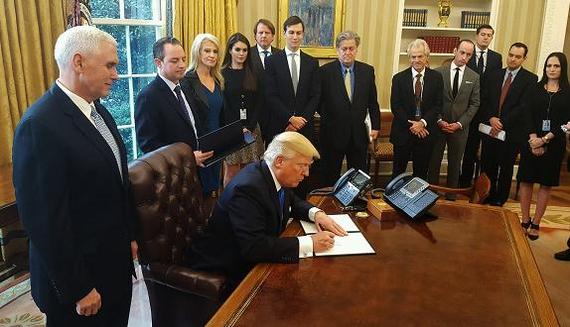 US Jewry stands out more than any Jewish community in history. They will determine if this works for them or against them.

For several months now, I have been writing about the exposure of the totalitarian nature of today's liberalism, the manipulation of public opinion through the media, and the necessity of American society to embrace all views, not only all colors and ethnicities. During those months, the divide between Democrats and Republicans has only deepened. If we could still hope that the demeaning attitudes toward the other side, the personal offenses, and the delegitimization campaigns would abate after the election, now that hope is gone. The entire left-hand column of The New York Times home page has become a section titled, "The 45th President," and is dedicated entirely to bashing Donald Trump and the Republican Party. CNN has also created a section high on its homepage called "The Trump Presidency," which dedicates the majority of its items to the same purpose as the section in the Times.

The biased reporting, organized protests, such as over the Dakota Access Pipeline, and the violence and tirades against conservative speakers do not hint at any easing of the battle of the media and financial elite against the new administration. Sooner or later, the tension will snap and the outcome could be devastating. From violent civil riots to a full-blown civil war, anything is possible right now.

And in the midst of all this balagan (mayhem)--the Jews. Jews are already top players on both sides of the conflict. If it turns violent, the Jews could be the first to take the heat. 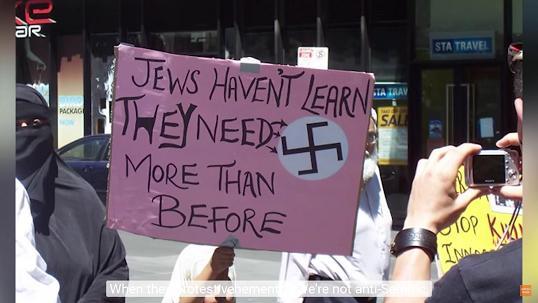 Screen capture from "Crossing the Line 2 - The New Face of Anti-Semitism."

The liberal press often argues that electing Donald Trump has released anti-Semitic elements from the far right, which has kept relatively quiet until now. Perhaps this is true, but implying that this is the reason for the rise in anti-Semitism in the US is complete nonsense. Anti-Semitism has been rising in the US and all over the world for years now, particularly in liberal hubs, such as US universities and colleges. In February 2015, the most notable expert on anti-Semitism in the US, Prof. Charles Asher Small, spoke about "institutional anti-Semitism" in the US, inferring that the government itself, which at the time was the Obama Administration, is anti-Semitic.

In addition to all of the above, the leading role that some Jews--such as George Soros--play in flaming the toxic firestorm spreading through the US puts the Jews in a precarious position. As has always happened throughout history, if things go awry in the US, the Jews will be blamed for it, and they will incur the punishment.

Connection Is the Secret

Jews are not like other people, and they are not treated as such. Even when people intend to compliment the Jews, they often make it even more conspicuous that Jews are different. Just recently, during his Holocaust Memorial Day speech, Antonio Guterres, the new UN Secretary General, noted the vital role that Jews played in the history of his own country, Portugal. Lamenting the deportation of Portuguese Jewry in the 16th century, Guterres said about King Manuel's decision to expel them: "This was a hideous crime and an act of enormous stupidity. It caused tremendous suffering to the Jewish community - and deprived Portugal of much of the country's dynamism. Before long, the country entered a prolonged cycle of impoverishment." Subsequently, Guterres describes what the Lisbon Jews did to the Netherlands, where they resettled. "Lisbon's loss was Amsterdam's gain," Guterres said, "as the Portuguese Jewish community played a key role in transforming the Netherlands into the global economic powerhouse of the 17th century."

Just over a century earlier, Spain made the same mistake--expelling its Jews and ending centuries of prosperity for Spain. But the Jews who fled from Spain were not left homeless. Dr. Erwin W. Lutzer and Steve Miller wrote in The Cross in the Shadow of the Crescent: An Informed Response to Islam's War with Christianity, that the Ottoman Sultan, Bayezid II, was so delighted at the Jews' expulsion from Spain and arrival in Turkey that he "sarcastically thanked Ferdinand for sending him some of his best subjects, thus impoverishing his own lands while enriching his."

The Jews did not take wealth with them when they fled from Spain or when they were deported from Portugal. They did not steal anything from these countries, but their departure denied these countries a trait that is more vital than any precious metal--the ability to make connections. The Jewish secret to wealth and power is the ability to make connections and utilize them for their needs.

Yet, it is precisely this trait that causes us to be so hated. We are using our unique ability for self-centered purposes, and this is something that the world cannot forgive.

The Ingathering of the Pariahs

Most nations are forged over generations of geographical proximity or biological affinity. Not so are the Jews. Our nation is the creation of an idea, a modus operandi that no other nation in the history of humanity has implemented. Like Abraham himself, the ancient Hebrews were outcasts. They fled from their tribes and joined Abraham when he told them about his ideology--that diversity of views and characters is welcome, as long as it is used for the common good. Our ancestors were individualists; they could not put aside their views and be run-of-the-mill folks. In Abraham's tent, they found a way to be themselves and at the same time belong.

Maimonides wrote in Mishneh Torah (Chapter 1) that Abraham was expelled from Babylon when he argued with Nimrod, king of Babylon, over whether or not there are multiple forces governing the world or only one force. Abraham won the debate but lost his home. As he wandered toward Canaan, he and Sarah would speak to anyone who wished to listen. They welcomed everyone, all the loners, pariahs, rejected and dejected who could not express themselves in their own communities. In Abraham's tent, they learned that all things are manifestations of a single force, and so they all belong to it, yet are its unique representation. Here they legitimized being who they were, yet became part of a greater whole--the family of humanity.

Abraham's disciples and descendants developed their father's teachings and continued to absorb anyone who subscribed to their notion that everyone is different, yet belongs to the same greater whole. Because we are different, we do not like each other. But because we all are parts of a greater whole, we unite nonetheless. The ideology was simple: "Hate stirs strife, and love covers all crimes" (Prov 10:12).

By the time the Jews came out of Egypt, they numbered some three million people. And yet, the same rule applied--connection above hatred. The result of their efforts to unite above differences was the revelation of a law that enabled them to unite at the highest level--loving their friends as themselves. The reason why they received this law--which we call Torah--specifically at the foot of Mt. Sinai is that the word "Sinai" comes from the Hebrew word sinaah (hatred), and Moses' trek up Mt. Sinai symbolizes the commitment of the people to rise above their mutual hatred and unite.

For centuries after the reception of the Torah, the Jews kept polishing their techniques for achieving unity. When they succeeded, they prospered; when they failed, they suffered. But after each failure, they always rose and united above their hatred. Gradually, the Jews became the masters of connection.

Mark Twain once wondered why the Jews have survived as a distinct nation since antiquity. In his essay, "Concerning the Jews," Twain wrote, "The Egyptian, the Babylonian, and the Persian rose, filled the planet with sound and splendor, then faded to dream-stuff and passed away; the Greek and the Roman followed, and made a vast noise, and they are gone. The Jew saw them all, beat them all, and is now what he always was. All things are mortal but the Jew; all other forces pass, but he remains. What is the secret of his immortality?" The secret is the ability to connect above all differences.

The book, Likutey Etzot (Assorted Counsels), writes, "The essence of peace is to connect two opposites. Hence, do not be alarmed if you see a person whose view is the complete opposite of yours and you think that you will never be able to make peace with him. Also, when you see two people who are completely opposite to each other, do not say that it is impossible to make peace between them. On the contrary, the essence of peace is to try to make peace between two opposites," by uniting above them.

And finally, the great British statesman Winston Churchill was quoted in Churchill and the Jews: "The Jews were a lucky community because they had that corporate spirit, the spirit of their race and faith. ...That special power which they possessed would enable them to bring vitality into their institutions, which nothing else would ever give."

Why the Nations Blame Us

Yet, instead of using our ability to connect in order to solidify society, we started using it for self-benefit. Our ability to connect made us more perceptive, agile, yet sociable than any other nation. Is it any wonder then that we are always at the center of events? We connect to people and help people connect to one another. But unlike our forefathers, we do this only if there is something in this for us. Naturally, people fear us, admire us, want to be near us, and detest us all at the same time. And when things go awry because people cannot get along--which is the only reason why anything ever goes awry--they blame the Jews for it. We, the Jews, who were supposed to be the masters of connection, have failed them so they expel us or kill us.

Today's US Jewry is more emboldened and more vociferous than any Jewish community in history. Jews are dominant figures on Wall Street, in the film and TV industries, Internet and social media, and certainly in politics. If American society falls apart and chaos ensues, the Jews will take the blame. The only way they can avoid a tragedy of epic proportions is by reaching out to their brethren on the other side of the political map and saying, "Yes we disagree, and yes we hate each other's guts; now, let's connect above all this."

Jews must take the lead because they are still the masters of connection. Now they only have to force themselves to use it for the benefit of society rather than their own. By doing so, they will become "a light unto nations," showing a shredded nation how to transcend all disputes and find a new power in connection--just like our ancestors.

We are living in historic times. Usually, historic times entail horrific bloodshed. But we can make this time different. We can usher our global society into an era of peace not because one side obliterated the other, but because both sides have decided to contribute their uniqueness to the success of society as a whole. The global village, of which we are all parts, can become heaven on Earth or hell on Earth, depending solely on the decision of the Jews whether to rise above their differences and unite with their brethren, or not.