I have seen Nazi concentration camp footage before: the gas chambers, the burlap bags of hair, the cadavers piled in a pit.

But what I saw this weekend, in rare footage screened at the Thessaloniki Documentary Film Festival in Greece, was shocking beyond measure. Not even the Greek sun could alleviate the pain. André Singer's documentary Night Will Fall features the footage of British and American cameramen who filmed the liberation of the camps, the majority of whom had been summoned by the UK Ministry of Information to record the Nazi genocide for archival purposes. The opening shot is happy: the somewhat grinning faces of the liberated concentration camp survivors, their hands gripping the barbed wire fence that had enclosed them.

That is it for happy images. Reel after reel shows what the "liberation" really entailed in Majdanek, Auschwicz, Buchanwald, Bergen-Belsen, Dachau: cleaning up the camps of tens of thousands of cadavers, urgently, to prevent disease and epidemic. We watch men hump one thin rubbery cadaver after another over their shoulders, and drag each, head bobbing, mouth open, across the dirt to fling into a mass grave. There are no coffins, no wrapped shrouds. The cadavers bounce as they land in the heap. We see in close-up the caved-in rotting faces of women and men, dumped around the camp, the emaciated survivors crouching nearby. The camera pans on German villagers, holding their noses with a handkerchief, as they are forced to walk through the camps, single file, and see what their regime had done. In some shots, we even have a soundtrack: the sound of low solemn voices, of birds twittering.

These are not the amateur grainy reels of a soldier or journalist. The greatest cameramen and editors of the epoch were summoned to document the liberation: Sidney Bernstein, Richard Crossman, John Krish, Peter Tanner, Alfred Hitchcock. The result was to be a documentary called German Concentration Camps Factual Survey. Bernstein produced the project; a screenwriter designed the storyboard. 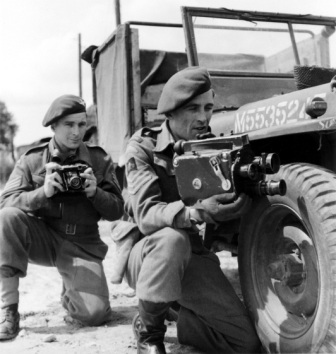 But after a year of intensive work, the documentary was canned. Politically, it was considered too incendiary in the post-war "reconciliation." Instead, Austrian émigré Billy Wilder in the United States was commissioned to make a shorter documentary, entitled Death Mills, to screen to Germans and Austrians.

The difference between Wilder's completed documentary and Bernstein's intended documentary is vast. The former has an admonishing propaganda message about the "evil" Nazis. Bernstein's scope is larger: "This could be you anywhere if civilization breaks down." The ending lines are a universal warning: "Unless the world learns the lesson these pictures teach, night will fall."

Singer, an anthropologist and veteran filmmaker, brings Bernstein's exceptional project to light and makes it contemporary. His documentary intersperses the original archival footage with interviews with the American and British cameramen who filmed it. Even seventy years later, these professional technicians cry, rubbing their eyes, as they tell the story of their experience filming.

At least, the voice-over notes, the reels served some purpose: at the Nuremberg trials, they were used as evidence in convicting former guards. 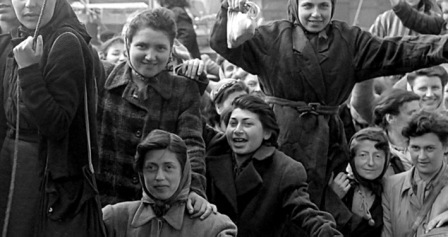 An absolutely different -- and happier -- filmic approach to liberation footage is offered by Every Face Has a Name, by Swedish director Magnus Gertten. While Night Will Fall exposes in full horror the dehumanization of the camps, that not even liberation could alleviate, Every Face Has a Name is an effort to honor the humanity of the survivors, that remains intact despite all. Gertten takes one, five-minute reel of footage of concentration camp survivors arriving by ship into the port of Malmö, his native town in Sweden, and shows it repeatedly, in slow-motion pan, zooming in on one particular face each time.

Then he proceeds to discover the name, identity and current whereabouts of each person featured in the clip: today in Israel, Argentina, the United States. He enters the person's home, sits on the couch, and shows the footage -- which the person her or himself has never seen -- on his computer.

"Hey that's me!" says one elderly Jewish woman, pointing at a grinning little girl. "That's me! But where is my mother? She must be nearby."

We find out the individual story of each survivor whom we glimpse standing in the crowd in the black-and-white reel: the plump girl with a shy smile and her mother from the ghetto of Lodz, the former French resistance soldier now interned in the Invalides military hospital in Paris, the brother and sister, now living in New York.

"It's not exactly a look of happiness," says the New York City survivor, pointing at a quizzical little boy in the clip. "Can you see how wary I look? I do not trust."

His sister next to him, in contrast, is radiant.

Some of the survivors never fully recovered. One man, who in the footage was a baby wrapped in a bundle, held by a frozen-faced young woman, explains that his mother never lost that frozen look. She was unable to love. "I was like something the cat dragged in," the man says soberly.

The most beautiful images in the footage: the survivors taking their first shower, outside, with water pouring down their bodies. "I am clean! I am clean!" smiles one young woman, exuberant, as the water falls slow motion onto her face upraised to the sky. "Here I am," says another in wonder. "I am free!" One little blonde girl giggles in chortles as her mother washes her hair.

This is the genius of Gertten's documentary: That he takes the footage and plays it in slow motion, so we see each nuance of each facial expression, and we become intimate with the survivors. In the beginning of the film, all the faces in the crowd are anonymous. By the end, we know them as people.

The director commented: "Each image is two-and-a-half seconds. I zoomed into a fourth of the frame. I added the panning and slow music, the music. This is a name-giving ceremony."

He explained with a kind grin the motivation for his eight-year project. "My father was a little boy watching the ships coming into the Malmö harbor in April 1945. It was a major event. I am proud of Sweden. We are still a country who welcomes more immigrants than any other."

The only (minor) fault -- in my opinion -- with this deeply heartwarming and original documentary is that the well-meaning director tries to inject, in tads, a message about immigration policies, by every so often interspersing the archival footage with shots of a ship landing in Sicily in 2014, with African and Arab immigrants coming to port. The immensity of his project with the liberation footage is in itself enough.

Viewers of Every Face Has A Name were in tears. One saw the film twice. It won the Fipresci award at the Festival.