As darkness falls, a swarm of insects descends upon our Ebola Treatment Unit (ETU) deep in the heart of rural Liberia. Giant moths the size of bats beat their colorful wings against the blue tarp walls of the nursing station. Crickets chirp loudly from the surrounding forest while green and black beetles make their way slowly along the gravel paths. A tornado of flying termites surrounds every light bulb, spinning in tight circles for hours on end. The shear volume of insects feels almost biblical in proportions.

Despite the insects and the darkness, I actually prefer the overnight shifts. It is cooler at night, which makes the Personal Protective Equipment (PPE) -- the suits, hoods, masks, goggles, aprons, gloves and boots that we have to wear -- far easier to tolerate than during the scorching hot days. As we finish suiting up for our evening rounds, the local Liberian staff pause to offer their own biblical references, holding double-gloved hands in a tight circle of prayer. The expatriates stand by awkwardly at this point, adjusting our masks and goggles as we wait for the prayers to end. 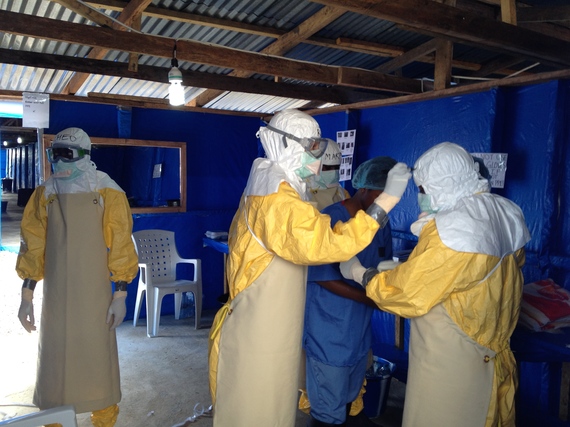 Finally, we are ready to begin seeing patients, stepping gingerly through the gate separating the dressing room from the high-risk zone of the ETU, feeling a little like astronauts taking our first steps onto the surface of a strange planet. All of us have something in our hands -- cartons of food, bottles of water, packets of evening medications, bags of intravenous fluids and stacks of clean bed sheets. Everything patients need for the night must be carried in at the start of rounds; once we enter the high-risk zone we cannot easily step back out to grab something we missed.

It turns out that most of our patients are doing well this evening. The Ebola virus causes a wide spectrum of disease, ranging from mild cases limited to fatigue and muscle aches, to more moderate cases with significant vomiting, diarrhea, and belly pain, to the most severe cases with delirium and bleeding. Thankfully, nobody is bleeding or delirious this evening.

There are a few patients with severe diarrhea, but it seems that we are keeping them hydrated well enough with drips of intravenous fluid and steady encouragement to drink oral rehydration solution. I sigh with relief. We've lost many patients since opening the ETU almost two weeks ago, but tonight -- my very last night here -- it doesn't look like anyone's going to die.

I spend some additional time at the end of rounds with a few of the recovering patients who have been in the ETU almost since our first day and whom I've gotten to know pretty well by now. There is Elijah, the surly fourteen-year-old who at first refused to eat any food or take any medications, but has come around since we brought him a radio a few days back to cheer him up. Elijah seems happy this evening, though he gives me little more than a shrug when I explain that I'll be leaving Liberia in the morning to return to the United States. Teenagers.

In contrast, Comfort is effusive in her thanks as I say goodbye. She is an operating room nurse, and one of three health care workers we are currently treating in the ETU. She was quite sick when I first met her, and almost certainly would have died had International Medical Corps not opened this ETU just as she fell ill.

We saved her life, as we have several others, not with any fancy experimental drugs, but instead with simple and inexpensive treatments that have been the mainstay of critical care medicine for decades. And in a country where health care workers are a very limited resource, saving one's life will certainly lead to saving many others.

I let Comfort know that we would retest her in the morning to see if the virus had cleared from her blood and it was safe for her to be discharged home. "Then after you're all better," I say, attempting a wink through my goggles, "You can come back and work as a nurse here in our ETU." She smiles at the idea.

Evening rounds over, we undress from our PPE before returning to the low-risk area of the ETU, sprayers showering us with chlorine as they tell us to remove various items one by one. The remainder of the night passes slowly, sweeping up bug carcasses, restocking the pharmacy, updating the white boards, and generally getting everything clean and ready for the day team. Then, almost without warning, dawn breaks. In a matter of minutes, the sky turns from pitch black to bright gray, and we know that our long night shift has finally come to end. 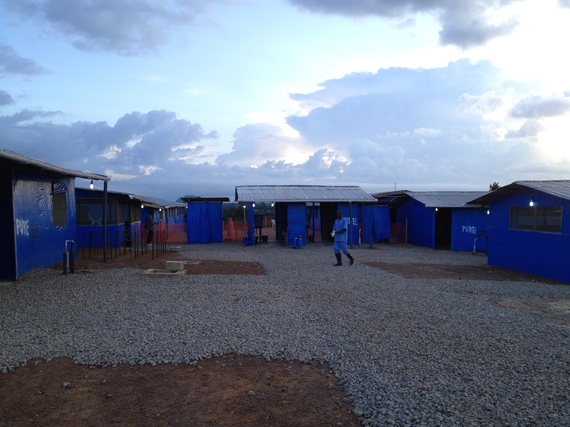 There is a saying here in Liberia, which I first saw a few weeks ago written across the front of a truck delivering gravel to our ETU: "No condition is permanent."

These are certainly dark times for West Africa, but dawn may still lie ahead.

According to recent projections by the Centers for Disease Control and Prevention (CDC), the Ebola virus could infect 1.4 million people in the coming months if the epidemic is allowed to continue unchecked. However, if we open enough ETUs during this timeframe and take other measures to break transmission of the virus, the CDC estimates that the Ebola epidemic could be all but over by late January.

Accomplishing this task will require thousands of foreign troops to build the needed ETUs and hundreds of humanitarian aid workers from around the world to manage them. Manufacturers will need to increase the production of PPE and the citizens of wealthy countries will need to foot the bill. But it can be done.

It is squarely within our power as human beings, as humanitarians, to end this modern-day biblical plague. So let's suit up and get to work. 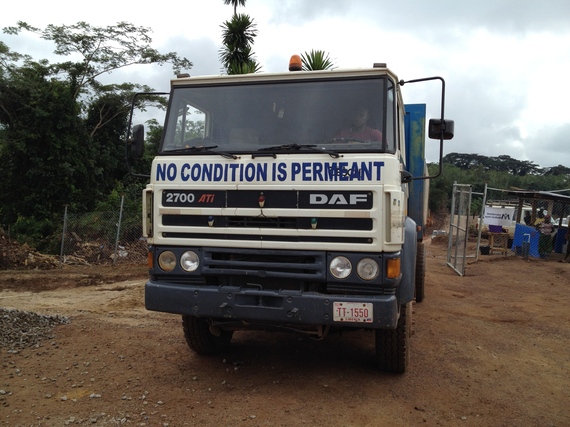