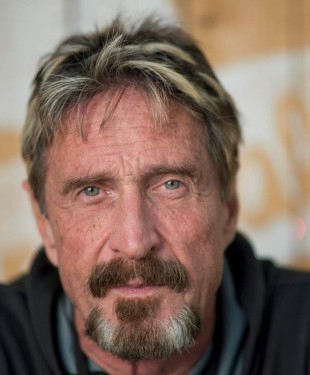 John McAfee holds no illusions about how difficult it would be for the Libertarian Party Nominee to win the White House. He does see 2016 as a historic opportunity to spread the libertarian message of personal liberty, privacy and self-ownership.

"We all know it stops in November," said McAfee. "What can we do in those intervening months? We can change America. All we have to do to wake a person up is to show them the truth in the right light."

McAfee has been described as "philosophical" and "cerebral" thus far based on his debate performances and interviews. Our conversation was no different. But an angry electorate already rejected Rand Paul's philosophical, libertarian message, apparently preferring the street fighting tactics of Donald Trump, at least within the Republican Party. McAfee says he's ready for a street fight with Trump or Clinton in the general election.

"Am I ready for a street fight? My life has been a street fight. And people call me philosophical. I've started several different types of businesses. One of them was sold for almost $8 billion, others for hundreds of millions. It takes more than a philosophy to do that," said McAfee.

McAfee believes America is twenty years behind rivals Russia and China in cyberwarfare, but far too involved in conventional warfare around the world. Asked how far he would go in terms of withdrawing troops from deployments in Germany, Japan, Korea and elsewhere, McAfee replied,

"Bring all the troops home. Maybe people have not noticed, but we have problems right here in America that are not being addressed. Trying to solve the rest of the world's problems with military aid and devices? Please, is this rational? It is not."

The first step in catching America up in terms of cybersecurity, according to McAfee, is to recognize the problem.

"There are safer ways of fixing this problem if we can get everybody in government to work together. But I'm afraid what it will take is some devastating event that it will be difficult to recover from. And please, we don't want to wait for that," McAfee added.

You can watch the full video interview below. More information on McAfee's campaign can be found at www.bealibertarian.com.

The final debate before the delegates vote for the nomination is tonight (Saturday May 28) at 8:00 PM EDT and will be carried live on CSPAN, Reason.com and several other media.

Tom Mullen is the author of Where Do Conservatives and Liberals Come From? And What Ever Happened to Life, Liberty and the Pursuit of Happiness?