"Milton [Friedman] is the embodiment of the truth that ideas have consequences."

Donald Rumsfeld, in a speech at Milton Friedman's 90th birthday party in 2002, held by the Bush White House to honor Friedman's legacy.

In autumn 1984, the Icelandic Libertarian Association arranged for American economist Milton Friedman to visit Iceland. During this visit, Friedman gave a lecture at the University of Iceland on the "Tyranny of the Status Quo," and debated the country's leading socialist intellectuals--including current president Ólafur Ragnar Grímsson. This visit made a great impact on several young members of the Independence Party, including Davíð Oddsson, Hannes Hólmsteinn Gissurarson, and Geir Haarde. 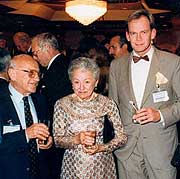 Mr. Gissurarson, right, in happier times, with Milton and Rose Friedman at a Mont Pelerin conference in Tokyo in 1988.

Not content to sit on the sidelines, these men took action to break the government's total control over Iceland's media, fisheries, and banks. Hannes Hólmsteinn operated an illegal radio station, to protest against the government monopoly of broadcasting, and wrote an influential book advocating the privatization of Iceland's main resource, its fisheries.

Davíð was made head of the Independence Party and became Prime Minister in 1991. He began a radical program of monetary and fiscal stabilization, privatization, and tax rate reduction. Corporate taxes were reduced from 50% to 18%, and the net wealth tax was abolished. The fishing quotas were given free of charge to the owners of fishing vessels. In 2002, Hannes Hólmsteinn published a new book--"How Can Iceland Become the Richest Country in the World?"--in which he set forth a plan for Iceland to become an international financial center. In 2003, the country's main commercial banks were privatized.

Friedman saw Iceland as his utopia. "I would like to be a zero-government libertarian [but] I don't think it's a feasible social structure. I look over history, and outside of perhaps Iceland, where else can you find any historical examples of that kind of a system developing?"

At first, the policies appeared to be very successful. The economy grew at a strong pace, rising until Iceland achieved one of the highest per capita GDPs in the world. In 2007 it also topped the score for the United Nation's Human Development Index.

Iceland rocketed to the top 10 in the indexes of economic freedom. The Cato Institute praised the "Nordic Tiger" for its flat taxes, privatization and economic freedoms, and rated it as the least regulated country in the world.

Unfortunately, it has become evident that these libertarian policies were not the panacea that Friedman claimed they were. In fact, economists are already using Iceland as a textbook case of how to ruin a nation's economy. As Paul Krugman recently noted, there is an "almost eerie correlation between conservative praise two or three years ago and economic disaster today."

Although respectable economists were pointing out the fundamental weaknesses in Friedman's paradise as early as 2006, it is remarkable that Iceland's Financial Supervisory Authority (FSA) does not appear to have found a single securities or antitrust violation during the entire period of spectacular growth, despite the fact that nearly all of Iceland's wealth is controlled by a very small group. The Central Bank--led by Davíð Oddsson--took no steps to rein in the banks or to accumulate the reserves of foreign currency required to back their overseas commitments.

Any attempt to restrain the banks and businesses was met with contempt. The Iceland's parliament--the Althingi--was bullied into to implementing "globally competitive policies," with the implied threat that the investors would otherwise flee the country. Which they did anyway, with the banks setting up hundreds of shell corporations in Tortola.

It is an unfortunate characteristic of utopias that they never work as planned. Reality has a way of making a mockery of political and social constructs that are based on theory. Friedman's belief that the markets would somehow regulate themselves didn't take into account the predictably irrational character of human nature. In Iceland's case, the investors' irrational exuberance was matched only by the bank executives' irrational belief that they were the best at everything.

Certainly, no rational foreign investor would take a chance on Iceland now. It should be obvious now that regulation by disinterested parties is essential to the functioning of the markets. Until the entire affair is investigated and made public, until an effective regulatory scheme is enacted, until unbiased regulators are given real power over financial institutions, Iceland is dead in the water.

It is time for the grownups to take over again.