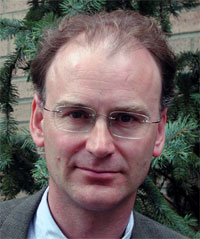 I've always been a fan of British Zoologist Matt Ridley, and have read several of his fascinating books (The Red Queen: Sex and the Evolution of Human Nature is particularly good). But outside of scientific issues, Ridley is about as clued up as George Bush was about Iraq before he invaded it.

In a savage article a year or so ago in the Guardian, George Monbiot ridiculed Ridley's involvement in the Northern Rock debacle (Ridley was chairman of the bank and had lobbied hard to deregulate lending regulation, which inevitably ended in its collapse), and dismantled his libertarian view of economics.

Ridley resigned in disgrace before the bank was nationalized, and has apparently been busy writing a book on the causes of poverty and prosperity. In an interview with Reason, Ridley outlines why government is always a terrible thing when it comes to economic development. He says:

A classic example is the Chinese retreat in the 1400s, 1500s. China got rich and technologically sophisticated around the year 1000 A.D. That's when it's working at its best.

Interestingly, it's just come out of a period when it's not unified. Once you're unified, people keep imposing monopolies and saying there's only one way of doing things and you've got to do it this way. Whereas when you're fragmented, as Europe remained throughout this period, people can move from one polity to another until they find one they like.

If you want a recipe for how to shut down an economy, just read what the early Ming emperors did. They nationalized foreign trade. They forbade population movements within the country, so villagers weren't allowed to migrate to towns. They forbade merchants from trading on their own account without specific permission to do specific things. You had to actually register your inventories with the imperial bureaucrats every month, that kind of thing. And they did the usual idiotic thing of building walls, invading Vietnam.

The argument is classic libertarian nonsense - you take an example of deeply corrupt leaders, use their penchant for demanding absolute power as an example of state interference, then ascribe it to socialism. Ridley is obviously of the mind that the only alternative to his view of pure, free market capitalism, is North Korean style communism. He forgets the strikingly successful examples of social democracies in Northern Europe, the massive contribution to economic development the government played in Britain and America, the incredible growth in China, and of course the inconvenient fact that the government had to come in and clean up the mess he made in Northern Rock.

The interviewer from Reason, Ronald Bailey contributed his own idiocy to the discussion with the following mind boggling nonsense:

I was at a Cato Institute function where the British development economist Peter Bauer was giving a lecture, and I had a really smart-ass question: Isn't the problem with a lot of poor countries, Africa in particular, that there's corruption and we have to get rid of corruption? And he leaned back on the podium and smiled and shook his head, no. And he said when the United States and Britain were developing in the 19th century, their governments were as corrupt as anything you'd find in Africa, but the governments in Britain and the United States had control of 1 percent or 2 percent of the economy when those countries were growing. In many African countries, the government controls over 60 percent of the economy. That's the difference.

It's difficult to know where to begin with this type of drivel. It's amazing to hear rich Westerners talk so smugly about corrupt African governments, conveniently forgetting that their own countries put most of them in power. Also, an idiot could figure out that the difference between the United States and Britain in the 19th century and modern Africa, has little to do with government intervention in the market. The simple fact is that one was subjected to hundreds of years of colonialism, war and the brutal theft of its resources, and the others left largely alone to develop infrastructure, raise trade barriers, and conquer other nations to control resources.

Libertarians wield an unusual type of intellect, mostly born out of borderline autistic personality traits, enormous self confidence and a complete lack of connection to reality. Ridley is an engaging fellow, but his analysis of human history is devoid of human empathy, reducing interactions to mathematical equations and evolutionary game playing tactics. He is a product of the British upper classes, a subsect of society bred to believe they were born to run the world. Ridley's philosophy has been ruthlessly exposed by the meltdown of the global economy and the clear need for decisive government action, yet he maintains the bizzarre notion that governments are to blame. Ridley will find himself with less and less intellectual influence over the coming years, a hard blow to someone conditioned to believe in his own supreme relevancy. Most likely, this will lead to more outrageous arguments to justify his ideology, pushing himself further and further away from reality.

As a free market ideologue, Ridley should embrace the death of a bad idea - it is natures way of saying "sorry buddy, you're wrong." Yet I suspect he will return to the welfare state of Libertarian circles who will reinforce his ideologies, bolster his confidence, and bail him out no matter how badly he fails.

Ben Cohen is the Editor of The Daily Banter.com