March is Women's History Month, which reminds me of the role women played in launching the libertarian movement and the role that women with libertarian values have played in advancing women's rights.

In the dark year of 1943, in the depths of World War II and the Holocaust, when the most powerful government in the history of the United States was allied with one totalitarian power to defeat another, three remarkable women published books that could be said to have given birth to the modern libertarian movement. Stephen Cox, Isabel Paterson's biographer, writes that "women were more important to the creation of the libertarian movement than they were to the creation of any political movement not strictly focused on women's rights." 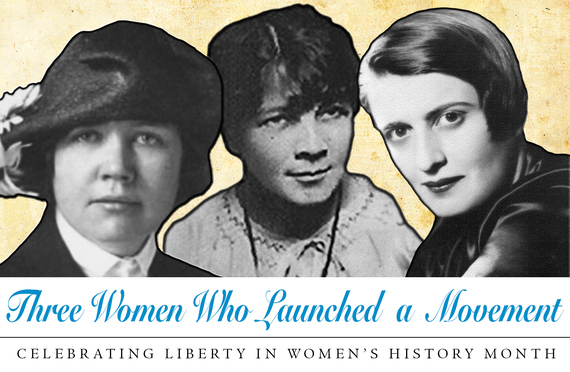 Rose Wilder Lane, the daughter of Laura Ingalls Wilder, who had written Little House on the Prairie and other stories of American rugged individualism, published a passionate historical essay called The Discovery of Freedom. Isabel Paterson, a novelist and literary critic, produced The God of the Machine, which defended individualism as the source of progress in the world. And the most famous, Ayn Rand, published The Fountainhead.

The women were very different. You could hardly get more traditionally American than Lane, the daughter of the bestselling chronicler of the American frontier. She traveled throughout Europe as a journalist after World War I and lived for long periods in Albania. Paterson too was born to a poor farming in family, albeit in Canada. She made her way to Vancouver and then to New York City, where she became a prominent newspaper columnist. Ayn Rand was born in czarist Russia and came to the United States after the Communist takeover, determined to write novels and movie scripts in her adopted language.

The three women became friends, though the three strong-minded individualists eventually fell out over religious and political differences. By that time, though, the individualist tradition in America had been revived, and a fledgling movement was under way.

Paterson, Lane, and Rand were not, however, the first libertarian women to advocate for individual rights.

The equality and individualism that underlay the emergence of capitalism and republican government in the 18th century naturally led people to start thinking about the rights of women and of slaves, especially African American slaves in the United States. It's no accident that feminism and abolitionism emerged out of the ferment of the Industrial Revolution and the American and French revolutions. Just as a better understanding of natural rights was developed during the American struggle against specific injustices suffered by the colonies, the feminist and abolitionist Angelina Grimké noted in an 1837 letter to Catherine E. Beecher, "I have found the Anti-Slavery cause to be the high school of morals in our land -- the school in which human rights are more fully investigated, and better understood and taught, than in any other."

Mary Wollstonecraft (wife of William Godwin and mother of Mary Wollstonecraft Shelley, the author of Frankenstein) responded to Edmund Burke's Reflections on the Revolution in France by writing A Vindication of the Rights of Men, in which she argued that "the birthright of man... is such a degree of liberty, civil and religious, as is compatible with the liberty of every other individual with whom he is united in a social compact." 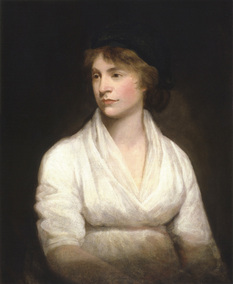 Just two years later, in 1792, she published A Vindication of the Rights of Woman, which asked "whether, when men contend for their freedom... it be not inconsistent and unjust to subjugate women?"

Women involved in the American abolitionist movement also took up the feminist banner, grounding their arguments in both cases in the idea of self-ownership, the fundamental right of property in one's own person. Angelina Grimké based her work for abolition and women's rights explicitly on a Lockean libertarian foundation: "Human beings have rights, because they are moral beings: the rights of all men grow out of their moral nature; and as all men have the same moral nature, they have essentially the same rights.... If rights are founded in the nature of our moral being, then the mere circumstance of sex does not give to man higher rights and responsibilities, than to women." Her sister, Sarah Grimké, also a campaigner for the rights of blacks and women, criticized the Anglo-American legal principle that a wife was not responsible for a crime committed at the direction or even in the presence of her husband in a letter to the Boston Female Anti-Slavery Society: "It would be difficult to frame a law better calculated to destroy the responsibility of woman as a moral being, or a free agent." In this argument she emphasized the fundamental individualist point that every individual must, and only an individual can, take responsibility for his or her actions.

The Declaration of Sentiments adopted at the historic Seneca Falls Convention in 1848 consciously echoed both the form and the Lockean natural-rights liberalism of the Declaration of Independence, expanding its claims to declare that "all men and women are created equal," endowed with the inalienable rights of life, liberty, and the pursuit of happiness. The document notes that women are denied moral responsibility by their lack of legal standing and concludes that women have been "deprived of their most sacred rights" by "unjust laws." That classically liberal, individualist strain of feminist thought continued into the 20th century, as feminists fought not just for the vote but for sexual freedom, access to birth control, and the right to own property and enter into contracts.

Libertarian feminist writers in the late 19th and early 20th centuries included Voltairine de Cleyre, Lillian Harman, and Suzanne LaFollette. Wendy McElroy collected some of their writings in Freedom, Feminism, and the State: An Overview of Individualist Feminism. Joan Kennedy Taylor developed the argument in her 1992 book Reclaiming the Mainstream: Individualist Feminism Rediscovered.

A libertarian must necessarily be a feminist, in the sense of being an advocate of equality under the law for all men and women, though unfortunately many contemporary feminists are far from being libertarians. Libertarianism is a political philosophy, not a complete guide to life. A libertarian man and woman might decide to enter into a traditional working-husband/nonworking-wife marriage, but that would be their voluntary agreement. The only thing libertarianism tells us is that they are political equals with full rights to choose the living arrangement they prefer.

In their book Gender Justice, David L. Kirp, Mark G. Yudof, and Marlene Strong Franks endorsed this libertarian concept of feminism: "It is neither equality as sameness nor equality as differentness that adequately comprehends the issue, but instead the very different concept of equal liberty under the law, rooted in the idea of individual autonomy."