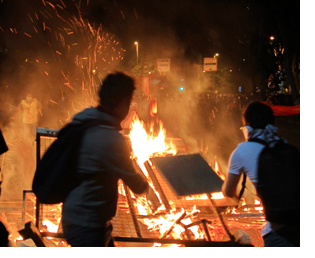 ALEXANDRIA, Egypt -- A scholar at this city's library was murdered by a mob of religious fanatics during her morning commute to work. According to reports from eyewitnesses, as the woman drove to the library, she was stopped by the mob, pulled from her transport and stripped bare before being skinned alive. Her mutilated remains were later taken to nearby Cinaron and burned. The mob then moved on to the library, renowned as the world's greatest archive of ancient texts, setting it ablaze. The vast majority of the works of Sophocles, Aristarchus, Sappho, Hero, and hundreds of other ancient scholars were lost in the conflagration. Experts described the extent of the loss as "incalculable."

The victim's name was Hypatia. Her killers were Christian followers of Cyril, the Bishop of Alexandria. The year was 415 A.D.

Hypatia was a leading scientist, astronomer, and mathematician. In a time when women were considered property of men, Hypatia was widely respected for her academic achievements. The contemporary historiographer Socrates Scholasticus described her this way in his Ecclesiastical History:

There was a woman at Alexandria named Hypatia, daughter of the philosopher Theon, who made such attainments in literature and science, as to far surpass all the philosophers of her own time. Having succeeded to the school of Plato and Plotinus, she explained the principles of philosophy to her auditors, many of whom came from a distance to receive her instructions.

As the great Carl Sagan explained in his original Cosmos series, "Cyril despised her...because she was a symbol of learning and science which were largely identified by the early church with paganism."

Many historians view Hypatia's murder as the symbolic death of classical antiquity, the advent of a thousand year period of intellectual darkness, whose eventual coda was the Renaissance. It would take over 1,100 years for Nicolaus Copernicus to reinvent the work of Aristarchus of Samos, who correctly determined that the Earth orbits the Sun - not the other way around. Galileo, some 60 years after Copernicus' death, was forced, on pain of death, by the church Inquisition to recant Copernicus' heliocentric model of the solar system.

Of the inestimable intellectual treasures lost in the pyre at Alexandria include the works of Sappho, Berossus, and Hero of Alexandria, an extraordinary mechanical genius, who invented steam engines, wind turbines and automated machines - the forerunners of today's cybernetics.

Hypatia was all but forgotten by history. Cyril was made a saint.

Deeply rooted in the bedrock of Christianity is the Garden of Eden's forbidden tree of knowledge. Genesis warns us that those who sample its fruit "...will surely die." Hypatia learned that lesson the hard way, as did fellow intellectuals Giordano Bruno and Étienne Dolet who were burned at the stake. Galileo narrowly escaped a tortuous death. We are taught that ignorance is bliss (or else).

5,700 miles and 1,600 years away from the smoldering ruins of the Library of Alexandria, a United States senator hurls snowballs and scripture in the face of climate change science. 14 states use tax dollars to teach creationism in public schools, at a time when science and math scores of America's students are already counted among the worst in the industrialized world. Americans, claiming to be warriors for the Constitution, yet oblivious of that document's Establishment Clause, are convinced that America was conceived as a Christian nation. The ranks of America's mob, armed to the teeth, and suspicious of the dwindling educated "elite," swell in numbers and paranoia.

In 2008, then Senator Barrack Obama criticized bitter Americans who "cling to guns or religion." The mob has been terrified ever since that the suspected Muslim President will take away both. Legislatures in ten states have attempted to erect barriers against the contagion of dreaded Sharia law. Texas' governor, validating his state mob's paranoid conspiracies about the government's imminent seizure of firearms, dispatched the Texas National Guard to "protect Texans" from a routine military exercise.

While religion is fueled by faith, science is grounded in evidence. The fire and brimstone that consumes reason on Earth is propelled by conviction and excuse of divine purpose. On the other side of the world, beneath the sands of antiquity in a forgotten place called Cinaron, the charred bones of an ancient scholar offer evidence of what happens when a civilization prioritizes faith over fact.

Hypatia Library Of Alexandria Carl Sagan Cosmos Galileo
This Blogger's Books and Other Items from...

Going Virtual: Why Do We Need Offices - Part 1
by Todd Miller