When teachers returned to a Michigan school after summer vacation Friday, they were greeted with a surprising package, and a reminder of the positive impact they have on their students.

The morning mail at the Academy of the Sacred Heart, a Catholic school in the Detroit suburb of Bloomfield Hills, included a package from 7,000 miles away. Director of Enrichment Agostino Visocchi was immediately perplexed.

When it was opened, he discovered a thin book titled T.S. Eliot by Leonard Unger that he first thought might be a donation of a rare item. But he also found a handwritten note, which read:

I graduated from ASH in 1980. I live now in Dubai, of the U.A.E. In a radical decluttering of my belongings, I came across the enclosed. Please accept my sincere apologies for the 33-year tardy return!

Wishing you and the very wonderful educational institution ASH is, the very best, 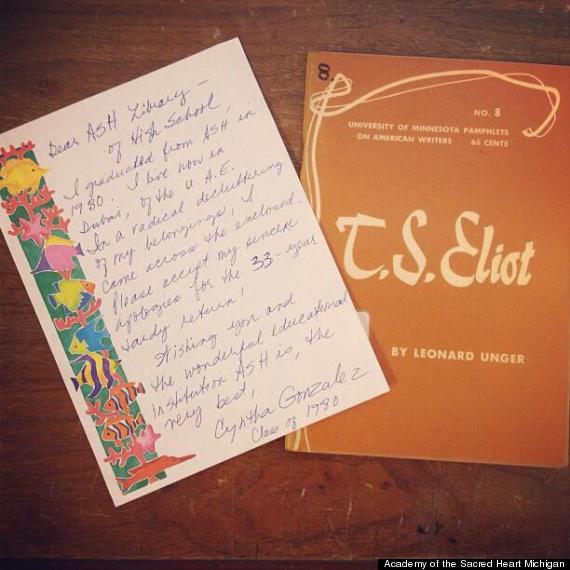 "An '80 alum mailing us a book back about T.S. Eliot? It made us feel good knowing our alums still care so much about doing the right thing," Visocchi told The Huffington Post. "We're a mission-based school, priding ourselves on creating leaders of conscience. Knowing this woman's conscience was bothering her because she had a 65 cent book..."

"It was just a great moment, a nice lighthearted moment to start off the day," he said.

Visocchi said Gonzalez lives in Dubai and works as a human relations coach, trainer and writer.

And the future of the slim volume? Though the library system has been updated since Gonzalez's years, Visocchi said it's destined to get a new catalog number and return to the shelves soon. Hopefully, it will captivate a new crop of students for slightly less than 33 years at a time.

Though three decades sounds like an extraordinarily long time to hold onto a library book, it's nowhere near the longest.

Last month, an Ohio library not only received "The Real Book About Snakes" 41 years after its 1972 due date, but $299.30 to cover overdue fees at 2 cents a day, as well as an apology. The anonymous sender wrote, "Sorry I've kept this book so long but I'm a really slow reader!"

And earlier this month, a book found its way back to the Kentucky library it belonged to after more than 100 years.