As the crisis in Libya intensifies, Internet traffic to and from the country appears to have dropped off completely.

According to Arbor Networks, the cutoff occurred on Thursday March 3 between 11:30 a.m. and noon EST.

After a quiet week, we received reports tonight [Thursday] that Libyans in Tripoli were suddenly unable to use various Internet communications utilities. Examining the BGP routing table, we saw nothing unusual --- all Libyan routes up and stable.
But our traceroutes tell a different story (no responses from Libyan hosts). All of the Libyan-hosted government websites we tested (i.e., the ones that are actually hosted in Libya, and not elsewhere) were unreachable. [...] [W]e suspect that someone has turned off the tap on the Libyan Internet again, this time leaving the routes in place.

Hours later, Renesys reported the following: "[I]t looks like this is more than a blip -- radio silence for 12 hours and counting."

Renesys CTO James Cowie told the International Business Times that Libya's current Internet blackout is different from the country's temporary outage on February 18--different, even, from Egypt's Internet blackout in January. "It's like a post-apocalyptic scenario where the roads are there, there just isn't any traffic," Cowie said.

In one sense, what the Libyan telecoms operator is doing is not dissimilar to the "throttling" of traffic that happens on any network when users exceed their data limits. The data is either slowed down or the subscriber gets charged more money. In this case the throttling was simply set at zero.

The chart below, courtesy of Arbor Networks, visualizes Libya's Internet traffic over the past week. Arbor's data was provided by 100 ATLAS ISPs from around the world. 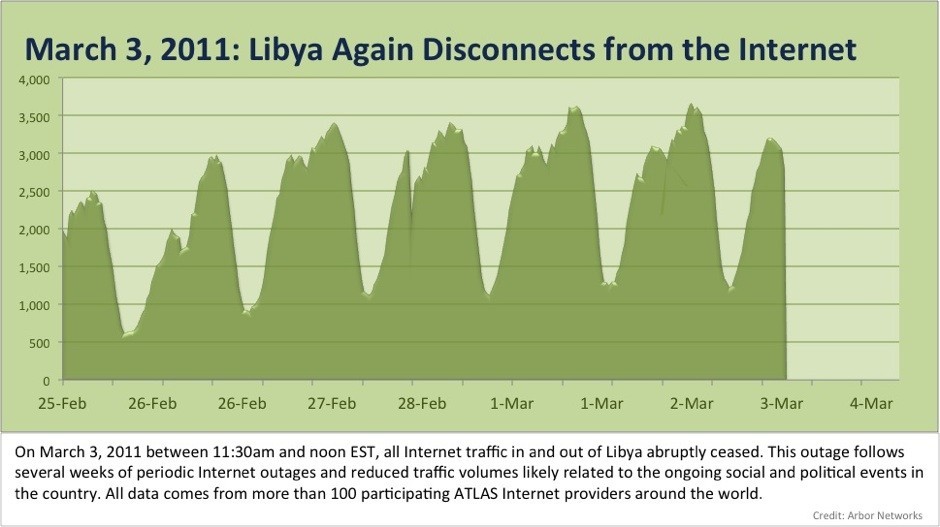