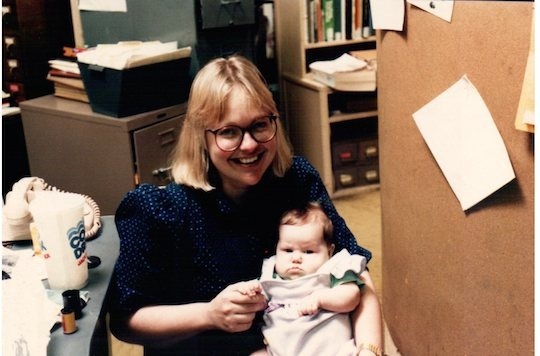 There is something of the fish tale in birth stories. Women in labor can be unreliable witnesses: minutiae make big impressions, big things pass by unnoticed. Even if women in labor were the most objective chroniclers, people still wouldn't listen. In our culture, there's an undercurrent of mistrust in women's testimony--from doubting rape victims to steamrolling women in business meetings.

I felt this keenly during my first son's birth. Story-wise it wasn't even that interesting: a labor and delivery nurse made fun of my name while I pushed, a doctor game me a vaginal exam with one hand while holding a Starbucks cup with the other. If anything, it needs exaggeration. It needs to become a really big fish.

What I would like is a world where women felt less monitored, unconcerned with being dubbed liars, freer to exaggerate, to let it rip, while we all sat around and listened, moony-eyed as stories emerged, made great by bending the facts to fit.

It is possible I feel this way because the story of my own birth is a whopper of epic proportions. My mother didn't lie. It was a damn doozy.

It was February in Dallas, Texas. My mother was a week past her due date. It showed as she unloaded groceries in her driveway. A man approached her. It took her a moment to see the knife. When she did, her panic was complete, incoherent. "Who are you?" she demanded, but he didn't reply, just kept advancing, so she took the brand-new O'Cedar mop she'd just bought and beat him over the head. Maybe he realized she was pregnant, maybe she was getting the best of him with that mop, either way, he changed tactics, begging, "Lady, please just give me your purse!"

My mother was stunned. Her purse? So simple! She threw it to him. He fled. After shelving the groceries, she realized she should probably call the police. They came, along with a few concerned friends. She told and retold the story to clucks and dismay, until, eventually everyone left. Alone she prepared for motherhood, my father long gone.

Check-in was a nightmare: her ID card and insurance cards, all thrown to the man with the knife. When she told the nurses she wanted a natural birth, they laughed; she hadn't yet had a contraction. Start walking, they said. So she did. She walked and walked and walked.

My mother was not well-prepared for natural childbirth. Her birthing teacher said it'd be the greatest pain ever experienced, worse than dropping a bottle of orange juice on your foot. The teacher's main concern was ensuring my name was numerologically fortuitous.

Her labor coaches were friends, a couple who'd become my god-parents. The nurses assumed Bill, my godfather, was my actual father, and they were in a fury when he kept leaving to see his "girlfriend" in the hallway. They whispered in gossipy horror, but my mother, who finally submitted to Pitocin, was in heavy labor, unable to explain.

Meanwhile, my grandmother, who was very drunk and had a low, gravelly voice, kept calling the hospital, demanding updates. The nurses assumed she was a man, asked my mother's permission to release information to her father. My mother's father had been dead for fifteen years. "Sure," my mother cried between contractions, "if he found a way to call, tell him whatever you want."

My mother's labor progressed. She believes she was given an epidural, against her wishes, and without relief. The main problem was she'd now gone forty-eight hours without food or water. Ice chips, they finally relented. She got a stingy cache of ice chips. What she wanted, desperately, was a shower.

"By the time you were born," she said, "I hated you." Bill held me first. The nurses cooed, "She looks just like you."

Just then, a local talent agent named Ivette Stone burst in wearing a fox fur coat. How she had flouted security was a mystery, but she'd come with a contract, determined to sign me at birth. My father was an actor and my mother was very beautiful; Ivette felt certain I was destined to be a child star. My mother signed the contract, mostly so she'd leave. Finally she did, followed by my godparents. Soon even the nurses stopped fussing. She was alone with me and it was perfect. Every mother knows that singular perfection: those first moments alone with a newborn child. Nothing compares.

My mother and I both developed fevers from the long delivery and stayed in the hospital for several days. One of my mother's dearest friends visited, along with his somewhat catty boyfriend, who asked why my mother still looked pregnant. My mother slapped him. "I had never slapped anyone before," she said, "and I have never since. But I slapped him, and the look on his face was pure shock. It was worth it."

I'm not interested at all in how my birth actually happened. Did Ivette Stone really burst in moments after I left the birth canal, contract in hand? Did my mother's friend's boyfriend really speak so thoughtlessly, and if so, how did he say it close enough to my mother's bedside that her slapping palm could reach his face? I don't care. I don't even care whether or not my mother had an epidural, a failed one. What I care is how it all seemed to my mother. What that day was like for her.

I would give her a check-book filled with blank lies, if it would help her explain that day, tell me how she became my mother in that chaotic, hilarious, sad, brutal world. I revel in the stories of my mother, of all women: their birth stories, their fish stories, their perfectly unreliable testimonies. They seem precious to me, and I have never understood why others just toss them aside, unconcerned with their value, as though gold were just many dirty yellow rocks.

The author of The Girls From Corona del Mar, now out in paperback from Vintage.