Twenty-five years in the same rock band can make one wax prophetic about life and one's expectations. Guster Frontman Ryan Miller and drummer Brian Rosenworcel discuss playing, performing and recording together since their first day at college, maintaining a following for a quarter century (impromptu dumpster sets in an alley!) and how their music has evolved over the decades. In the most recent episode of The Dinner Party with Elysabeth Alfano, over spicy Chilaquiles from my kitchen in Venice Beach, Ryan, Brian and I discuss life according to Guster.

Enjoy this podcast to go. For more information on Guster and their newest CD Evermotion, see below. 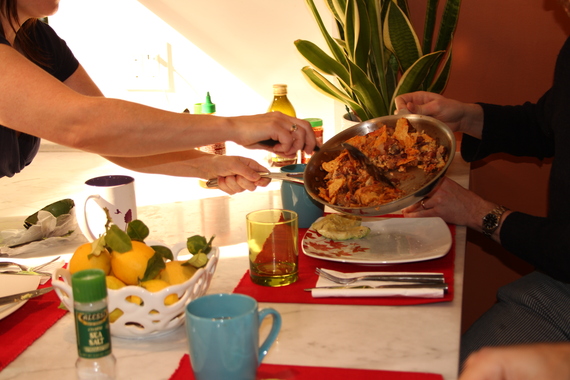 Guster currently consists of Ryan Miller, Adam Gardner, Brian Rosenworcel and Luke Reynolds. Ryan, Adam, and Brian met their freshmen year of college in 1991 and have been performing together ever since. They recorded and distributed their first album, Parachute while still in college. In 1996, the second album, Goldfly, was released. The band had mass success with their third studio album Lost and Gone Forever, with the single Fa Fa which made it to the Adult Top 40. They also had success on the charts with Keep It Together, their fourth album, with two singles, Careful and Amsterdam.

A live album/DVD, Guster on Ice, compiled from two shows in Portland, Maine was released in 2004. Guster released its fifth full-length studio album, Ganging Up on the Sun in 2006. 2006 was also the year that Guster won Album of the Year at the Boston Music Awards.

Guster released their sixth studio album Easy Wonderful in 2010. On tour for that album, Luke Reynolds replaced Joe Pisapia, who had joined the band in 2006.

2015 saw the latest studio album by Guster. Evermotion is distributed with Ocho Mule/Nettwerk Records and was created under the production of The Shins keyboardist, Richard Swift.