It is June 5th, 2014, a Thursday night, 7 PM. My daughter and I walk onto campus. We are numb. The auditorium is packed, so we walk along the side row to the front stage, where we sit, facing out, peering over an altar of candles, at a sea of faces. They are numb, too. Just hours earlier a shooting took place on our campus, and we have gathered to pray, to grieve, to grapple. We are Seattle Pacific University.

At that moment, we were united in horror, unified in grief. A tragedy such as the shooting last June, however, can have a way, not just of uniting a community -- but isolating us, too. Turning us into protectionists. Xenophobes. This might have happened to SPU. But it didn't.

To understand what I mean, fast forward. It is January 8th, 2015, a Thursday night, 7 PM, exactly 217 days -- 5208 hours -- after my daughter and I walked to the front of the auditorium, I walk again onto campus, this time with my wife Priscilla. The reception room is packed, so we nudge our way in, peering out toward a crowd of students.

But not just students. We are at a reception for residents of Tent City 3, which Seattle Pacific University is hosting. This community lives in, well, tents, with tarps as roofs, plywood thrown down as flooring. Without these tarps, without a host such as Seattle Pacific University, these people would probably endure a wet winter under various viaducts and bridges in Seattle. 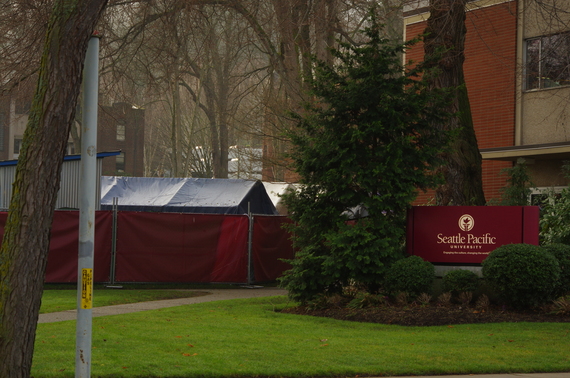 Tonight, they do not. Tonight we are sharing a meal together in the campus center. For three months they will live with SPU folk, their tarp fence and the tops of their honey buckets a reminder that they are part of us, at least partly, for the winter quarter.

They were part of us two years ago, as well. Over the protests of some residents in the surrounding neighborhood, despite the anxiety expressed by some tuition-paying parents, they lived with us. But then it was on an athletic field tucked in a fenced area, across a very busy Nickerson Avenue, away from the heart of campus. This year Tent City 3 lives on our main quad, smack in the middle of our community, right next to the front gate.

Last June, Seattle Pacific University grabbed national attention because of the shooting. We also grabbed the attention of Seattle by the way we grieved. It was, if this is possible, good grief, and our secular city, for a fleeting moment, embraced that.

What a tragedy it would have been, however, had we left grief behind and bowed to fear. SPU might have done that. SPU might have reconsidered their invitation to Tent City 3 and succumbed to misinformed and misguided questions: Who needs tent-dwellers ruining the grass of our lovely main quad? Who needs to be greeted by honey buckets and tarps and plywood floors squashing the mud of a Seattle winter? Who wants their college kids rubbing shoulders with drunks and drug addicts?

The people of Tent City 3, our new neighbors, are not in fact homeless, as Roger, a member of Tent City 3, explained last night. They have tarps for roofs and plywood for floors, but Tent City is their home. Nor are they drug addicts or drunks. Members of Tent City 3 live by strict rules. Alcohol keeps a person from reasoning, and reason is pivotal to communal life, so alcohol means being ousted. Drugs, too. Theft as well, since theft breaks trust, Roger explained.

Reality, however, is not perception, and the homeless are perceived by many of us to be a danger, a hazard to our security. So I might have understood if SPU had said, "Enough is enough" and rescinded their invitation to Tent City 3.

Instead, I find myself strolling to a reception in their honor.

What happens down the road tests the mettle of a community, when tragedies are put in perspective, when memories fade. That is when communities can build borders and raise walls -- or, as SPU has done, stay the stubborn course of hospitality and hope.