Amy Krasenics thought she had it all figured out: She'd marry, have kids, then when the kids were grown, live out her twilight days with her husband roughly along the lines of that Beatles' song, "When I'm 64." (Traveling, puttering around the garden, grandchildren on your knee -- you know the lyrics.)

But life has a way of going off-script, and a divorce -- then another one -- happened instead.

Below, the mother of three shares with us what she learned from two divorces by the time she was 35.

Like every single other married person out there, I never even considered I’d be divorced, let alone a single mom, at some point in my life. It just wasn’t in my Great Life Plan. I was going to marry, have my two kids, watch them grow, stand arm-in-arm with their father as they walked down the stairs for prom, graduation, leaving for college, and then, when the they left the nest, we’d grow old together, comfortable in our little regimen of gardening, taking trips and bouncing our grandchildren on our knees.

Alas, the universe doesn’t give a crap about our plans.

Let's get one thing straight first: I got married waaaaaay too young. I had children waaaaaay too young. We were together from the time I was 17. I never really dated. Soon, about a decade into the relationship, when I became a stay-at-home mom after the birth of our first daughter, things started getting less-than great. When we had our second daughter I realized there was no way I could live the rest of my life like that. I became a divorced single mom at 29 -- yep, divorced before many of my friends even married.

Shortly thereafter, I met the man I was sure was my soulmate. We rushed into the relationship, found ourselves pregnant rather early on and got married. And then, a month after our first anniversary, I discovered his affair -- his two year-long affair. His two year-long affair with a close friend of mine. I tried to make it work, because the very last thing I wanted to be was a twice divorced 35-year-old single mom of three young kids. Eventually he decided he no longer wanted to work on us any longer and moved out. I was devastated and sunk into a deep depression. Everyone said “hang in there; it’ll get better.” I couldn't believe them. But I hung in there, and thanks to my friends, my family, and most importantly, my children, it really did get better.

So now I was a 35-year-old twice divorced single mother of three young kids. What the hell do I do now? I thought. I knew I didn’t want to remain single for the rest of my life and that because of that, I'd have to enter the dating scene. Where does one go to meet single men? The internet, of course!

What's that been like, you ask? Online dating, especially as a single mom, cycles between tons of fun and tons of bold proclamations that usually go something like, "that’s it; I’m just going to be single forever." I talked to lots of guys. I went on quite a few first dates, but very few second dates. I very casually dated a guy for the summer. I entered into a serious relationship for about half a year. I did some ridiculously fun things –- hiking, kayaking, zip-lining, concerts. I did some not so fun things, but I still embraced the experience. I met a lot of crazy men, a few nice guys that just weren’t for me, and a handful of really great guys, whom I now consider friends. I’ve been criticized for dating a lot of guys since my divorce, but the second biggest lesson I learned from being married twice is to never settle for less than I fully deserve. I’ve become extremely picky. I know what I want in a partner, what I don’t want. 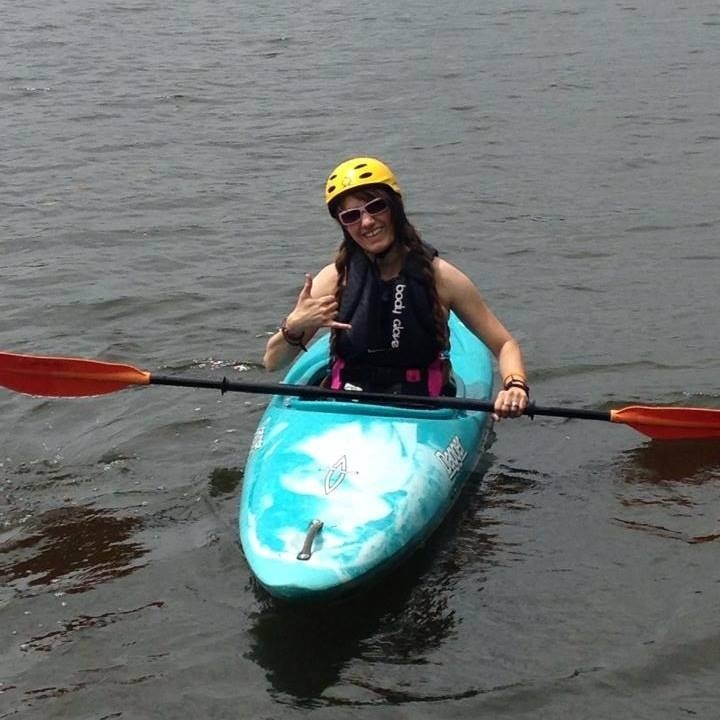 I purposely didn’t post pictures of myself on the dating site with my hair and makeup done, making a ridiculous sexy face. I posted pictures of me covered in mud, kayaking, hiking, at Disney World. I wrote a profile that would generate negative comments from men, but I didn’t care. I knew I had to completely be myself and the right guy would come along because of it. I altered so much of myself to try to make two doomed marriages work that I now decided to be 100 percent authentic and genuine and that meant admitting that I’m not all sunshine and rainbows all the time. (Sorry, guys.) I’m not traditionally “beautiful.” I bite my nails. I get PMS. That’s all OK -- and that’s what I wrote in my dating profile. The biggest lesson I learned from two “failed” marriages is to simply be myself.

There's that phrase -- "failed marriage." I don’t consider my two marriages to be failures. I’m great friends with both my ex-husbands and we work together as a team to raise our three amazing children. The marriages, and even the relationships and dating I’ve done since, weren’t failures because I learned such valuable lessons. I no longer tolerate disrespect, depression, self-absorption, clinginess or negative attitudes. I learned to be happy alone. The best things to come out of my “failures” are the lessons I've learned: to be myself, to be happy alone and to never accept less than I deserve.

I stopped mourning my divorce about a year ago and have since realized it was the best thing to ever happen to me, aside from my children. I’m thrilled with the person I’ve become since, and I’ve watched my children, especially my oldest daughter, morph into strong independent kids because that’s what they see their mother doing.

I’ve since met a wonderful man through online dating. He’s exactly what I want in a partner, all the things I learned through my countless “failures.” I once thought being mid-thirties, twice divorced with three kids was a dating death sentence, but it's not. It’s just the beginning.

Young Celebrity Divorcees
More:
This Is Divorce Atdivorce newsdivorce at 30divorceDivorce in Your 30s
Newsletter Sign Up
A weekly guide to improving all of the relationships in your life
Subscribe to HuffPost’s relationships email
Successfully Subscribed!
Realness delivered to your inbox