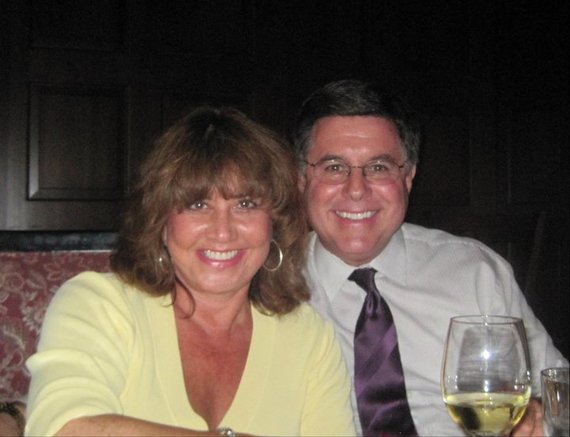 Twelve years ago I was broken. I had just ended a 29-year marriage, sent my only kid off to college, and was left broke and unemployed, left with the cats and the dog to feed. Not exactly my life plan. I was alone for the first time in my life and filled with fear.

I sold the big house on the hill and started a new life in the city in a cute little condo that was to be my healing place. I traded the country club membership for a job and sold my Mercedes-Benz and bought a used BMW. I penned my book, "Single Past 50 Now What?" and was thrilled when it was published. I moved on with my life as best I could.

It took two years before I dated again. Broken hearts bring with them broken lives and battered self-esteem. It took time to mend, heal and get my head together.

When I did, I went about the business of rebuilding. The friendships I was graced with became lifetime alliances. Life was good again and I had learned how to sleep alone. A triumph of epic proportions.

I dated happily and smartly, laughed a lot and felt comfortable in my skin again. Everything in my world was just as I wanted it. Everything.

That's about the time I received an email from an old high school friend of mine, a wonderful young man named Steven. We had been hangout buddies 40 years ago. I responded to his email and the conversations began.

We talked and it was as comfortable as ever. Much to my surprise I discovered that he had a crush on me back in the day (who knew?!). As the conversation unfolded he disclosed that he never married. He later shared that he had been waiting for me ... all these years.

Who does that? He did.

We began long-distance phone dating (a lot more exciting than it sounds) for three months. The time came to meet in person (can we say "nerve wracking"?). I flew back home to L.A. and reacquainted myself with the man who was one of my favorite people in years gone by.

The next year and a half was filled with twice-a-month visits from Steven. Southwest Airlines loved us, as he booked his fares from L.A. to Denver months in advance. Even in record breaking snow storms, the man never missed a weekend. At the end of those months together, it was time for a commitment.

It wasn't long before I followed this man across the country, with everything I owned in tow. I was about to take a second chance on love. If you knew me at all, you would know that I'm the LAST person to ever follow a man anywhere.

Despite my fear and my doubt, he was the risk my gut was telling me to take.

Here's the thing, when I find myself sitting on my front porch in my rocking chair at the ripe old age of 93, I'd much rather scold myself for making a bad decision than simmer in regret for something I didn't have the courage to try.

The truth is, life offers no guarantees. Risk is part of the bargain. Knowing when to jump in or run from, is a crucial life skill. If there is anything I know for certain, it's that nothing is for certain.

My life has always been about going beyond my imagination. Trying things I knew I had little chance succeeding at. Risking failure for a chance at success. Happiness, I have found, is less about the destination and much more about the pursuit.

We've been together six years now. A lot of growth, love and learning. We are buying a house together and settling in for a little something called the rest of our lives. All this time my life was waiting for my courage to catch up.

I love this man. He is everything I deserve. He is my gift, my light and my comfort. It will be my honor to marry him, despite my previous conviction that I would never marry again.

This is what I've learned and want to share with you: Happiness can always be found on the other side of fear.

The 9 Sexiest British Actors Who Make Us Swoon