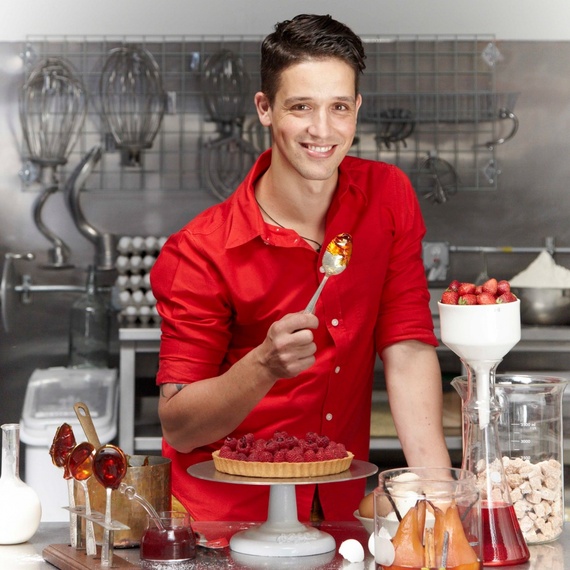 I caught up with Pura to ask him about passion, ambition, and what it's like having a Turkish mother.

HI: The last time we talked, you were just coming off your Top Chef win. What have you been up to since then?

YP: I would say, with the amount of stuff that's come up, I've probably lived an entire lifetime in the past seven years (laughs).

Let's see; three years ago, we opened up my patisserie Tout Sweet.

San Franciscans are hard-core foodies. They like good food, and they're really critical about it. It's awesome, but that's really been keeping me on my toes.

YP: We are expanding, yes. It's a lot of work. We have our online store (and a second store in Palo Alto now), and the cookbook that came out, which is pretty awesome. I was working on that for about four years.

I like being on television, because I like being part of a larger, national, conversation, but at the core of it, baking and cooking and being a chef are my passions. And that's where I am now.

HI: Tell us about your background.

YP: We moved here, from Turkey to the U.S., when I was 12 years old. My father was a hard-working Turkish man. That's where I get my work ethic.

My mother's side is huge. I probably couldn't even name all my cousins, that's how many there are. My grandfather was a restaurateur. Yet ironically, my mother was so adamantly against my being in the kitchen, as a boy, and she kept trying to discourage me.

My father, who was my biggest inspiration, passed away thirteen years ago. He was the one person who really pushed me to pursue my dreams, against everyone else's wishes.

YP: When we created Tout Sweet, I knew I wanted a lot of his personality, and a lot of things that remind me of him, to be included and incorporated into our brand.

HI: Has the Top Chef win helped you, would you say?

YP: Oh, absolutely. One thing I realized with Top Chef is that all these hopes and dreams, they not only take a lot of work and effort, they take a lot of patience because they take time to realize.

You always have the option to do something quick and easy that has the potential to be profitable. But to have integrity, to really do what you want, and to believe in it? That takes time.

Thanks to the Top Chef win, I do a lot of public speaking, and I realize you have to push people to really follow their dream. I know people say it all the time, but it's like that saying: if you love what you do, you'll never work a day in your life.

I work 18, 20 hours a day, and I literally won't take a day off for months at a time. Every now and then I'll stop and say, "You know, I think I should take a day off." But I've never once in my life said: "I hate what I do. I wish I could do something else" because I'm literally living my passion. And that's huge.

HI: Has your mom come around now, seeing how fulfilled you are?

YP: My mom absolutely has come around. Now she thinks all this is her creation, which is kind of funny.

YP: (Laughing) Exactly. She automatically takes credit for it all.

*An abbreviated version of this interview ran previously, in Travel + Leisure.