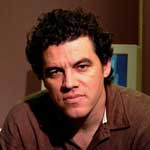 Pointing a telescope at the sky in the early part of the 17th century was a revolutionary act that led Galileo to discover the moons of Jupiter on January 7, 1610. By March 1610, he had announced his findings in his Sidereus Nuncius (meaning starry messenger). In 1611 he measured the orbital periods of the Galilean moons - that is to say, the time for Io, Europa, Ganymede and Callisto, which Galileo collectively named Sidera Medicea in honor of his patron, to orbit Jupiter -- and suggested that the regularity of their motion could be used to measure the longitude of an Earth-bound observer. With one swift stroke, Galileo had decisively changed our place in the Universe - and even that on our own home planet -- and given us an independent planetary system to behold.

Much has been made of Galileo's trial before the ecclesiastical tribunal, though some of the details are often misunderstood and have been used to fit a number of mutually exclusive storylines.* For one thing, Galileo had been given permission by his friend and admirer Pope Urban VIII to write his best-selling Dialogue Concerning the Two Chief World Systems provided that he gave both sides of the argument equal play. Alas, this was not an easy task for a master of polemical literature like Galileo, and it was one in which he failed miserably. It appears that Galileo underestimated the consequences of his transgression, and in the ensuing firestorm was forced to recant. But the bell could not be unrung and Galileo came to be seen as the founding father of modern science.

Following on Galileo's blazing trail and inspired by his example, Huygens discovered Saturn's largest moon, Titan - a moon rivaling any of the Galilean moons -- on March 25, 1655, as well as other smaller Saturnian moons. Yet, were the latter to be branded ``lesser'' by dint of their smaller size? Not according to Cassini who, having discovered the medium-sized Saturnian moons Iapteus in 1671, Rhea in 1672, and Tethys and Dione in 1684, declared them more exalted for being more difficult to discover, and named them Sidera Lodoicea in honor of King Louis XIV of France.

In the second half of the twentieth century the two Voyager spacecraft took pictures of Jupiter and Saturn and of their moons. The dedicated Galileo mission arrived at Jupiter soon after on December 7, 1995, followed by the Cassini mission, which reached Saturn on July 1, 2004. These spectacularly successful missions have bestowed on us a rich portrait of the moons of Jupiter and Saturn. Thanks to these unmanned spacecraft, we've witnessed Io's volcanic activity, as it sprayed plumes hundreds of kilometers high, draping itself with an ever-changing sulfurous landscape and injecting charged particles into Jupiter's crackling magnetosphere. We've visited Europa's hectic land of cracked and jumbled ice, punctuated by mysterious features like the disembodied smiles of the Cheshire Cat of Alice in Wonderland. We've spied on the largest moon of the lot, Ganymede, whose surface appeared as if a cosmic painter quit its canvas after but a few broad brushstrokes; which is more than the effort she put into Callisto, the next Jovian moon out, where only drips and splotches were seen here and there on its surface. 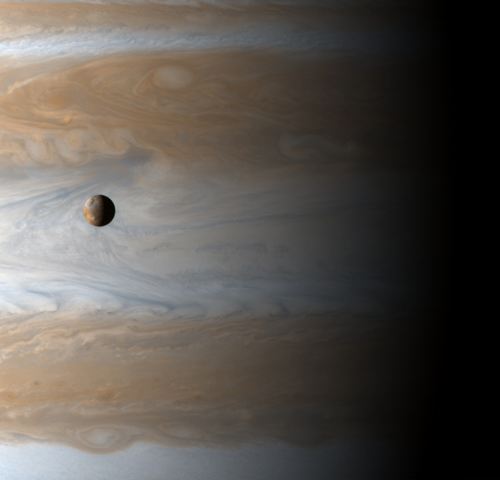 The Galilean moon, Io, as it passes Jupiter, as taken by NASA's Cassini spacecraft

More recently, we've unveiled Saturn's perversely eccentric moon, Titan, with its eerily familiar landscapes of dunes, lakes, rivers, and deltas complete with rounded pebbles and enshrouded by an atmosphere denser than the Earth's; it is as though Titan were mocking us for traveling to such a distant place only to discover a twisted replica of our own planet - superficially much like the Earth, yet quite alien in its make-up. And let's not forget about Cassini's favorite moon, two-faced Iapetus, with its dark and bright halves, and its puzzling equatorial ridge, like the backbone of a balled-up embryonic body.

Each moon has a story to tell us. Taken together they function as a stage within a stage, mirroring on a small scale the drama of the planets themselves, and providing us with essential landmarks in our ongoing exploration of the Solar System. When confronted by the sheer diversity of these moons, one idea predominates today much as in Galileo's day: we're dealing with miniature Solar Systems exhibiting all the hallmarks of a system of worlds in their own right.

As Cassini would have it, size isn't everything.

Ignacio Mosqueira is a SETI Institute principal investigator who studies the origins of the moons of Jupiter and Saturn. He has also written several plays.
You can meet Ignacio at Facebook.

-------------------------------------------
* The playwright Bertolt Brecht wrote two different versions of a play based on Galileo's life. In the first, he took issue with Galileo's abjuration, but credited him with slyness. In the second, he portrayed Galileo's fateful decision as the original sin ultimately responsible for the evils of the atomic age. It should be pointed out, however, that Bertolt Brecht himself implicitly renounced his beliefs during the McCarthy hearings. Be that as it may, it was dramatic that Galileo, who had seen farther than any man before him, went blind in the twilight of his life (as did, not to be outdone, Cassini).