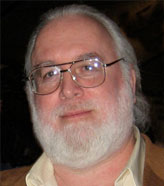 Dr. Laurance Doyle is a true renaissance man who thrives on discovery. His passion is to immerse himself into scientific mysteries and go, as the oft-quoted Star Trek phrase states, "where no man has gone before." Long before the discovery of the first planet beyond our solar system, astronomer Dr. Laurance Doyle, who joined the SETI Institute in 1987, began theorizing about the habitability of planets around other stars and clarifying the conditions needed for a planet to bear life. Relying on his expertise in signal processing, he now looks for patterns in astronomical data while searching for extrasolar planets.

Laurance has begun using these same statistical tools to look for patterns in animal communication. Drawing on central concepts of information theory, he and colleagues from the University of California at Davis have precisely measured the complexity of the songs of humpback whales, comparing them with communication in other species--including humans. In the future, he plans to expand this innovative line of research, moving to the next level of understanding animal communication, and apply it to SETI (Search for Extraterrestrial Intelligence).

Tell us about your current research project.
I'm a Participating Scientist on NASA's Kepler science team. In layman's terms, my project involves searching for "Tatooine" planets, a nickname for a binary star system coined after Luke Skywalker's home planet in Star Wars. Ideally, the goal is to find a habitable planet that is going around two stars.

The space-borne Kepler telescope is searching for the minute dips in brightness that occur when an orbiting planet crosses in front of its star, known as a "transit." When you plot the brightness with time, it's called a "light curve." The movement of the stars around each other while the planets move across the discs of the stars results in an unusual series of dips, which complicate the detection process.

How will you know if the planet is habitable?
For a planet to have the potential to be inhabited, it must be the right distance from the star so it will receive the right amount of light. The temperature of a habitable planet should allow liquid water to exist on the surface for long periods of time.

Why should the public care about your research?
This work is important for two reasons. If we don't find a habitable planet, that means earths are rare. It puts the earth in perspective as a somewhat isolated spaceship. That knowledge may allow us to convey the concept that we need to take care of our own planet, and that would be a good thing. People think about moving to Mars, but Mars' land surface area is only equal to earth's (since three-fourths of earth is covered with water). With earth's population currently doubling every 54 years, moving to Mars would only buy us another half century. So earth is it for now.

If we do find another earth, whether it's around a circumbinary "earth" or a regular single sun-like star, I think people's thoughts are going to transition to becoming less self-centered. Finding another earth might also make us think more positively about finding other beings in the universe. We have a very real shot at finding other earths with the Kepler Mission. We could detect a potentially habitable extrasolar planet within the next three years. Kepler is hugely important for the question of life in the universe. This is a key time in history.

What created the connection for you to take your work in astronomy and apply it to animal communication?
SETI and the Drake Equation. I began with the question Are we Alone? and realized that we share a planet with many pretty intelligent species. There are many species that apply what might be considered an elementary form of tool use and have complex social and communicative behaviors. But then I began thinking about how whales, for example, communicate with other whales. This led me to the notion of detecting non-human intelligence in the oceans as a practice for the search for extraterrestrial intelligence in space.

We've found general rules for what makes an intelligent signal so my colleagues and I looked into what is required for a signal to carry intelligence complexity. Starting with dolphins, I began plotting the frequency of occurrence of dolphin whistles as if they were linguistic phonemes. The plot landed in such a way that indicated dolphin signals had the same distribution as human linguistics. I thought that was amazing! We then looked at babies' babbling before they learned language, and the baby dolphins plotted exactly the same. We could watch mathematically how they learned their whistle language as they grew up, and they mapped the same as humans' language development. After that, I was hooked!

How are animal communication and extraterrestrial intelligence linked?
The math we use, Information Theory, is how we're going to get a handle on what constitutes an intelligent signal. Our first paper on the dolphin research was published in 1999. We want to continue applying those studies to humpback whale communication. Taking these findings into our SETI research seems a natural transition. When SETI looks for a radio signal, it's more the search for extraterrestrial technology as we don't have an intelligence filter yet. With animal communications, we're deriving an intelligence filter we can apply to signals we receive from space to determine if they land on a linguistic type distribution.

Every communication system may lend itself to this area of study and we can compare which are more complex, such as orca whistles or the dance of bees. I'd like to see Information Theory used as a mathematical tool and applied to every critter. We can then start to study general species communication intelligence, which is what SETI will detect. What we are going to get over light years, if we detect anything, is communication intelligence, so that's what we should be quantifying. We're on the way to solving this problem, but it needs more support. 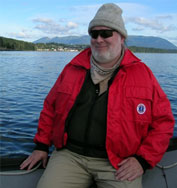 Photo credit: Sean F. Hanser
How do you detect the humpbacks' signals?

A few colleagues and I have special permission through the Alaska Whale Foundation to be among these amazing humpback whales, now an endangered species. Humpbacks react similarly to humans. We increase the volume or slow our speech when our environment gets noisy. If it's still noisy, we repeat. We can watch the humpbacks change the way they think about the environment and react by changing their data rate. Introducing this new tool will be invaluable for conservation as well.

What first sparked your interest in science and astronomy in particular?
When I was six, my dad gave me a map of the solar system. He told me, "The stars are other people's suns." That was it for me -- I was never on earth again. My love for space continued throughout my education. When asked to write an essay in second grade, mine was on the nine planets. When I was 10, I was teaching an astronomy class to the neighborhood kids every Tuesday night. I put up a map of the solar system, set up chairs, the kids would come in, and I'd teach them about the solar system. I was already a professor at age 10!

You believe your true calling is to teach. You still enjoy being a professor and are often inspiring Ph.D. students as well as giving lectures on astrophysics or using the Internet to teach quantum physics to the public. Do you have advice for students?
Science is really advanced nature appreciation. It isn't a scary weird thing. And if math isn't your strongest subject, Einstein once said, "Do not worry about your problems with mathematics, I assure you mine are far greater." I think I'm tied with Einstein on that one, but math is the language you have to learn. So one piece of advice I have for young people is to not get discouraged. Additionally, while going to school, it's important to learn as much as you can about the material given while simultaneously defending your individuality as best you can. Don't compromise your own unique contribution, because your thoughts will create something new that could have been rejected in the previous generation of science.

At the high school and undergraduate levels, it's important to think about your identity and figure out what you love. I believe what you love is the universe telling you what you should be doing. At the Ph.D. level, you start contributing to learning. You're at the point where the professor can no longer teach you about this subject. You have to ask the universe, and it's that step I really enjoy.

Can you offer some advice for educators?
I'd say the number one lesson for primary school teachers is to instill in their young and impressionable students that learning is fun. If you get that across, everything else is details. At an intermediate and high-school level, it's important to teach critical thinking -- how to learn, read, study, get things out of books and talk to people. This provides youth with the foundation they'll need to discover their true calling.

You're a fan of the Drake Equation and, like Frank Drake, enjoy being the first to discover or establish something new.

My career has evolved into a journey of exploration I thought I would get by walking on the Moon. What has kept me interested and engaged, however, has been the intellectual exploration. I've been able to study and discover things no one else knows. A little more than a hundred years ago, you could be the first to locate the source of the Nile. Now, the opportunities are more ones of intellectual discovery. I was one of the first to find out the age of the rings of Saturn when working on my dissertation, and I was the first to know dolphins have linguistic distribution. My colleagues and I may have been the first to apply Information Theory to animal communications. For example, we can now quantify the reaction of humpback whales to boat noise in Glacier Bay, Alaska. Knowing something for the first time is exciting. It's also very fulfilling when my work spins off to create new areas of science, research, and even conservation.

My research has always been up and down the Drake's Equation. I've tried to pick out elements that I thought could be answered, even if they were tough or nobody else was addressing them. One of the factors of the Drake Equation is detecting earth-like planets, so I advocated the transit method. Twenty years ago, there were three people working on the transit method. We couldn't get funding; it was all voluntary. I interested various people in that project, including the SETI Institute's Jon Jenkins, now on the project, and Dr. Hans Deeg, who leads the CoRoT (Convection, Rotation & planetary Transits) eclipsing binary planet search, a smaller scale French space mission. This is another example of a spin-off.

What is your philosophy of life?
Whoever has the most fun wins! Life is an adventure, and fun is a great way to navigate through life. This doesn't mean irresponsible indulgence; it means spending your time doing something that brings you deep joy. Joseph Campbell said, "Follow your bliss." So people make quilts and raise bees and do all sorts of things if they're following their bliss. I think that's the universe saying, "I want you to do this."

For more on Laurance Doyle, view his talk, Mongolian and Other Historic Solar Eclipses, presented as part of the SETI Institute Colloquium Series, on February 3, 2010.

Learn more about Laurance and his fascinating career in his full interview.