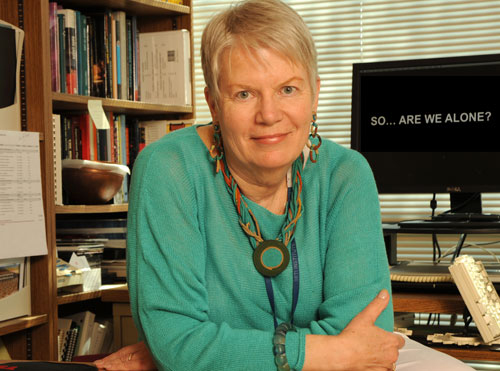 Astronomer Dr. Jill Tarter is Director of the SETI Institute's Center for SETI Research, and also holder of the Bernard M. Oliver Chair for SETI (Search for Extraterrestrial Intelligence). She is one of the few researchers to have devoted her career to hunting for signs of sentient beings elsewhere, and there are few aspects of this field that have not been affected by her work. Jill was the lead for Project Phoenix, a decade-long SETI scrutiny of about 750 nearby star systems, using telescopes in Australia, West Virginia and Puerto Rico. While no clearly extraterrestrial signal was found, this was the most comprehensive targeted search for artificially generated cosmic signals ever undertaken. Among her numerous distinguished awards and recognitions, Jill received the 2009 TED Prize, which will empower Jill and her team to take SETI research to an entirely new and broader level.

Being as much of an icon of SETI as Jill is, perhaps it is not surprising that the Jodie Foster character in the movie Contact is largely inspired by this real-life researcher.

Describe your childhood for us.

I was a tomboy and often acted more like a son than a daughter. At one point, my dad suggested I spend more time with my mom so I could learn more "girl" activities, but I didn't understand why I should have to choose. My mom and dad talked and decided I could continue doing the things I really loved. My dad taught me how to work with tools and I enjoyed taking things apart and putting them back together. Then I'd have to ask my Dad what to do with the one leftover part. We would walk along the beaches and he would teach me about the constellations. I loved spending time with my Dad.

I lost my dad when I was 12 and wasn't that close with my mom in my teen years. It wasn't until much later that I realized what a major role she played in molding me into the person I am today. My dad encouraged me to dream big dreams and my mom taught me the skills to actually work towards my dreams and accomplish my goals. I've encountered plenty of obstacles throughout my life but together my parents instilled and reinforced in me the confidence and knowledge that I could do whatever I set out to do.

What were your favorite and least favorite classes in school?
In high school, I wanted to take wood shop because they had such neat tools. However, I wasn't permitted to enroll. Girls had to take home economics, so I learned how to sew. Little did I know, it's a skill I still use today. My husband has long arms and likes paisley, so I make all his shirts. AND I got to take wood shop the next year!

In college, economics was my least favorite subject. After my dad retired from playing professional football with the Packers (who would later move to Green Bay) in the early 1920s, he worked for the Securities and Exchange Commission. He tried to explain the stock market to me, but I just found it uninteresting and illogical. However, I loved math and physics.

What originally opened your mind to endless possibilities and inspired you to go on this journey to discover life in the universe?
As a kid, I would watch Flash Gordon programs on television and grew up assuming there was other intelligent life in the universe. I remember walking along the beaches in southern Florida with my dad at night and looking at the stars. I thought there must surely be other children walking along their beaches with their dads looking at their stars, our Sun among them, and wondering about the beings that lived there. It seemed obvious to me, in the way it can to a child, that we were not alone in the universe. Today it is a question for which I have no answer, but I'm trying to find it.

You were the only woman engineering student in your class at Cornell. What was that like?

We didn't have a lot of money growing up, so I applied for a scholarship to Cornell University as a direct descendant of Ezra Cornell (my maiden name is Cornell). However, we received a letter stating those scholarships were available to male descendants only. A few days later, however, we received a letter from Procter & Gamble generously offering a full five-year scholarship to Cornell. At orientation, I was astounded that I was the only woman among a class of 300 engineering students, which was an interesting situation. One benefit was that in the large class sizes, the professors always knew who I was -- I was not to be disregarded.

A disadvantage was Cornell had an in loco parentis policy, which meant they felt legally responsible for the students' safety. As a result, the women were locked in their dorms at 10:00 at night and the doors were opened at 6:00 the next morning. The other engineering students were able to work together in the men's dorm while I had to solve the problems on my own. This experience left me with a lack of experience working within a team, which later created a professional challenge when I had to lead a team. I'm happy to say that teamwork and collaboration are now very much a part of most universities with which I'm familiar.

You were a pioneer in the field of SETI science. Was there any backlash from your professors and colleagues when you chose to pursue SETI rather than a more mainstream area within astronomy or engineering?
I was fortunate that gender discrimination didn't play a role as SETI was a fairly new area. Upon entering graduate school, I worked on programming one of the first mini-computers, known as the PDP-8/S. It could actually fit on a desk, and I learned how to program in Octal. Years later, as I was leaving grad school, Stu Boyer, who was working in x-ray astronomy, asked me to join his team to do a SETI program at Hat Creek Radio Observatory because I could program that old computer. Stu gave me the "Project Cyclops" report to read and I absorbed it cover to cover. It wasn't the technology or signal processing that impressed me -- it was that after many millennia of trying to answer the "are we alone?" question by asking priests and philosophers what should we believe, humans now had some tools to allow them to do an experiment to try to find the answer. I was hooked! 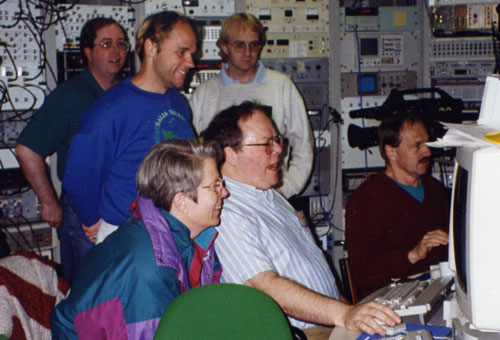 How wonderful that I was alive at just the right time and would get to be a part of this great scientific experiment! It really was the perfect blending of my engineering and astronomy educations. SETI was a fledgling niche field, and I was fortunate early on to have John Billingham from NASA Ames as a very gracious and thoughtful mentor.

It's inspirational that you've devoted your career to this particular life mission. Like so many scientists, your work advances the field but there is no guarantee you'll make that one significant discovery in your lifetime.
Every new day presents an opportunity to learn something new, which is extremely motivating. The exponential advancement of technology in recent years is so exciting! I wake up wondering how we can better search the skies. What tools do we need? As a small team, we've designed our own signal processing tools to conduct the search in near-real time. For the first time, high-end servers are now fast enough, and this has opened up the door to all sorts of new possibilities. Now we can reach out and involve the world in making our searches better.

You received the TED Prize in 2009, which is awarded to someone with a vision on how to change the world. Due to the TED Prize, the SETI Institute recently introduced setiQuest. What is the significance of setiQuest and how will it impact the search?
My TED wish states "I wish that you would empower Earthlings everywhere to become active participants in the ultimate search for cosmic company." When I was awarded the TED prize, it changed my point of view on what was possible and achievable. The world is full of smart people; and even if they don't work for the SETI Institute, they just might be motivated and able to help with the search. Thanks to the TED prize, we are developing the setiQuest community. This will provide a platform for the rest of the world to apply their specific skills to improve current searches for extraterrestrial intelligence. The community will improve our current code, published as open source, and devise better algorithms to help broaden the search.

Even people without those particular skill sets can become part of the search. We also want to involve citizen scientists to help us do what algorithms can't. We will need people who can use their eyes and brains to detect patterns in signals. There are certain regions of the spectrum where inhabitants of Earth generate the vast majority of signals our telescopes collect. To date we've neglected these because our algorithms get overwhelmed. But buried in there could just be a signal from somewhere else. Imagine if you were the first person to see it!

A second benefit setiQuest offers is we get to create a dialog with people from around the globe, hearing about their world views and sharing with them a world view that emphasizes our common, connected cosmic origins. To paraphrase Carl Sagan, we, all of us, are made of star stuff and we now have the capability to study the stars.

We're all the same -- we are human beings. My vision and sincere hope is that as we tell our stories and become involved in hearing each others' stories, we'll identify ourselves as Earthlings. By embracing our common humanity, our differences will be trivialized.

What needs to happen to really propel SETI science forward?
We need to involve the world and we need to establish the right funding mechanisms. The universe is vast and we may not yet be looking in the right places or using the right tools. My hope is we, as humans, survive long enough to figure out the right way to search. We need an endowment or stable funding source appropriate to support this long-range journey of exploration.

What is your ultimate vision for this quest? Where could this journey take us?
I'd love for all of us to be able to calibrate our place in the universe and help us understand who we are and how we fit into the rest of the cosmos -- even if, indeed, we are all there is.

What is one question you've never been asked (but wish someone would)?
The question would be, "When you were in high school and had those huge thunder thighs, why did you become a drum majorette?" When I went to school, it was pre-Title IX. In those days, women could be excluded from participation in competitive sports. We wanted to compete, and so we tried out to be a cheerleader or a drum majorette -- the only competitions in town. I learned that if I wanted something, I had to go after it. Margaret Burbidge once told me that being denied on the basis of merit was disappointing, but being denied on the basis of gender felt like a kick in the stomach. She got that right! She was also right in her determination to find some way around that obstacle and get where she wanted to go anyway. This type of determination has served me well throughout my education and professional career.

Want to know more about Jill?