Life Cycle is a series of posts that looks at the life and death of everyday things. 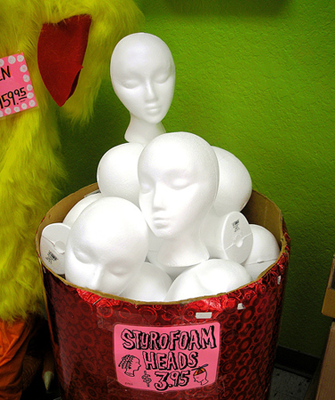 Your Styrofoam lunch container of Mooshu pork is labeled with the recycling number 6, a digit with evil connotations. Coincidence?

Styrofoam is one of the most infamous environmental villains, to be sure.

This highly durable spawn of the 20th century, also known as polystyrene, is manufactured using benzene, from coal; styrene, from petroleum; and ethylene, a "blowing agent" used in the process since the crackdown on CFCs. Extracting these raw materials generates air and water pollution, and the process of whipping them together can lead to lung cancer and neurological problems in factory workers.

(When we hear about a health advantage of working in a factory, we'll let you know.)

As for you, chow time with Styrofoam could mean ingesting a bit of styrene with your rice. Research on whether polystyrene chemicals "migrate" from container to food is hotly debated, but it's a fact that styrene has been present in our fatty tissue and breast milk for the past 30 years. We might not be clear on what that means yet, but it can't be yummy for baby.

Like all plastics, polystyrene is non-biodegradable, meaning remnants of your Chinese takeout will be chilling on planet Earth long after your great-grandchildren and possibly Brangelina coverage are dead and gone. Even after a take-out container has dissolved 500 years from now, its chemical components will still clog the eco-system. Polystyrene's bulky foreverness accounts for one-quarter of our landfill waste. While Styrofoam is recyclable, most curbside recycling programs don't support anything with the mark of the 6 due to the high cost associated with breaking them down.

As always, our glimmer-of-hope conclusion: EcoFoam, made from cornstarch, is 100% biodegradable and increasingly present in containers, packing peanuts, insulation and other traditionally Styrofoam products. And Blue Earth Solutions has an ambitious curbside pickup program called Foam From Home (they convert the stuff into a recyclable gel). Several cities in California have cast out the plastic devil altogether. Get thee gone, Styrofoam.

Next, we'll look at the stuff of your after-work hours and make it a Blockbuster night.

This post was written by Sarah Smarsh and Simran Sethi . Thanks to the University of Kansas School of Journalism, Merete Mueller and Lacey Johnston for research assistance and Archie McPhee for the image.