What's the best way to choose a mate? Here's some good advice.

"Look over a sample of males and go for the one with the longest tail."

Actually, that advice works really well for birds. Not so well for people. Scientists speculate that female birds might have had a preference for longer tailed males because those males could fly better. Long-tailed males then got a better deal. They were perceived as more attractive, therefore more able to find a mate and reproduce; therefore there were more of them around. It's called a runaway process, as described eloquently by Gerd Gigerenzer in his book Gut Feelings. He points out that in decision-making one good reason can be enough. ("Does this milk smell bad?")

What's the best way to make a career choice?

Counting summer and college jobs, I have worked as a chef, a professional stapler in a pamphlet factory, a veterinarian's assistant, a boat scraper, a mental hospital attendant, a newspaper reporter, a news producer and currently, a film director and blog writer. 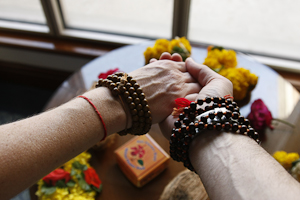 How did I make those choices? Uh, it's complicated. Important decisions are made not logically but from the gut.

When you "decide" on a particular career path or to take a job, you often are following a series of chance events. ("I went to high school with this guy, and then he knew this guy, and then we met this guy at Burning Man and that guy hired me.") In a study of 772 college and university students, nearly 70 percent reported that chance events influenced their career decisions. What we call "luck" is a big factor in how life and work unfold.

But what is luck, really? It breaks down to the ability to see opportunities when others don't. Colleen Seifert, a psych professor at the University of Michigan, calls this predictive encoding. You imagine scenarios where intentions and desires might be fulfilled and in so doing encode your mind to recognize the opportunity when it comes up.

When opportunity knocks, you're listening. You program yourself to receive the good stuff, and sure enough you do.

That means that you can grab on to the power of serendipity to make things go your way.

Changing your usual patterns also leads to opportunity. Richard Wiseman, a researcher who studies the psychology of chance, has shown that even taking a different way to work can change your perceptions and widen your horizons. This, I think, is what makes somebody like Keith Ferrazzi, author of Never Eat Alone, an effective networker. By becoming a professional extrovert and talking up everyone you meet, you see opportunity everywhere. Opportunity therefore is created.

Some folks are trying to take the idea of a "hunch" and make it into a science -- check out the addictive decision-making website hunch.com.

I still like to believe that I got my first job because I knew a guy who knew a guy who talked about the place with the thing and his sister, who was hot, recommended me.

But it would seem that luck is no accident and career paths are not random.

More:
healthy livinghow to find a date
Newsletter Sign Up
An essential daily guide to achieving the good life
Subscribe to our lifestyle email.
Successfully Subscribed!
Realness delivered to your inbox