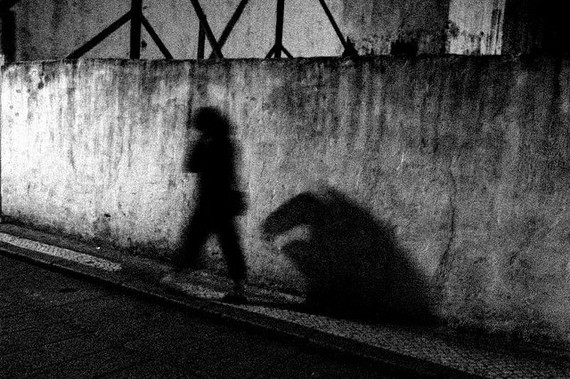 I was tidying our apartment when I saw a dark flash out of the corner of my eye. My entire body tensed, my heart skipped, and I gasped, thinking it was a palmetto bug or snake -- I live in Florida, either is a possibility.

When I turned to look I realized I had jumped at my own shadow. Literally.

It would be funny if the context wasn't so sad.

According to the Mayo Clinic:

"Post-traumatic stress disorder (PTSD) is a mental health condition that's triggered by a terrifying event -- either experiencing it or witnessing it. Symptoms may include flashbacks, nightmares and severe anxiety, as well as uncontrollable thoughts about the event."

My terrifying event took place on October 28, 2000 in Los Angeles when I was out celebrating Hallowe'en weekend with friends. While in my dear friend Wendy's car we were held up at gunpoint, a random robbery by two gang members on a crime spree. The female accomplice shot Wendy point blank in the head. She died on my shoulder.

Police caught the couple later that night and I spent the next two years testifying against them -- the actual criminal court system being nothing like it is on television. Both received life in prison without parole for murder in the first degree, partially due to my testimony.

After I testified for the final time in 2002 I felt my purpose for having survived Wendy's death was over, justice had been served cold. I tried to kill myself with the anti-anxiety meds my doctor forced on me in spite of my almost constant suicidal ideation.

I told everyone it was an accidental overdose. I even convinced the psychiatric facility of it during my 3-day psych hold. It was months later I finally admitted to myself it hadn't been an accident at all: While I was in the ambulance getting my stomach pumped and having charcoal pills shoved down my throat, I was most upset about the fact that I hadn't taken enough to finish the job.

Jumping at one's own shadow is a perfect metaphor for living with post-traumatic stress disorder.

A darkness that sets up permanent camp in your peripheral vision and won't go away, no matter how much sage you burn, or how many gods you pray to.

The shadow of that nightmare night has not abated, even in the 14 years since it took place. That shadow has shaped my life since. Sometimes retreating to a corner and letting me get on with my own business of living, picking up my shattered pieces and trying to hold them together in those scarce moments of inner peace.

Most of the time that shadow looms over and around me in the specter of a Dementor, making it impossible for me to breathe. My Patronus Charm doesn't work.

The shadow affects my sleep, my appetite, my happiness. It puts me so far on edge that my own movements startle me.

In 2009 I began work as an afterschool caregiver at an international school and on rainy days we'd squeeze into a classroom and watch cartoons. Revisiting the films of my childhood I hadn't occasion to watch since: I found myself jealous of Peter Pan. He is so marvelously free of his own shadow he actually has to chase it down and sew it back on.

Why couldn't the shadow of my trauma do that? Just fly off and leave me alone.

Working with kids also showed me how PTSD regresses its owner to a childlike state: When a child is hurt or upset their entire face crumples and the primal wail they release is a singularly powerful and painful sound. I had flashbacks to when my PTSD was most acute -- in the years closest to the event -- and how I would dissolve just like those kids, crumpling into a weeping puddle, shaking with fear, no control and no ability to stave off the avalanche of emotions and relived horror for a more appropriate time or place.

There, embraced in the shadow of my trauma, was nothing but red flashes of pain, thunderclaps of sorrow, the devastation after an earthquake, and

I'm right back in that car, a gun in my face and Wendy slumped against me

I'm in the silent nothingness of an entire bottle of Klonipin.

There is only me and the shadow.

My jealousy of Peter Pan expanded to include the children, who are allowed to cry and scream and meltdown and nobody judges them. Nobody expects them to pull themselves together. Nobody is embarrassed at their behavior. Nobody rolls their eyes. Nobody qualifies the kids' pain. They are allowed to let whatever hurt -- no matter how minuscule -- run its course. And when it's through open arms are waiting to comfort them.

Adults have no such luxury. There is no respite for grown-ups. There is only a heavier and heavier emotional load dragging behind us, a minefield in caboose form.

The shadow of trauma doesn't just set up camp, it builds a home around you. Everything you experience becomes filtered through the shadow's lenses. Like Mickey Knox said, "The darkness just sort of becomes who you are."

That's the thing about certain traumas: all you can do is learn to live with them.

Some shadows never go away no matter how much light you shine. And certain times of year -- especially approaching the memorial of that terrible event -- make the shadow's hold ever darker and ever stronger.

Elsa sings, "It's funny how some distance makes everything seem small." Yet, the shadow of trauma is one of few things in the world that stays the same size -- if it doesn't grow larger -- in the rearview mirror.

And even years, decades later, when you think you've finally grown comfortable with that shadow, you know where its edges are, you know how to cope, you've got this.

But then you see a flash of darkness in the corner of your eye.

Your body tenses, your heart skips a beat, you gasp.

You come to understand that the shadow of trauma has been with you so long it's indistinguishable from your own shadow.

You realize that no matter how comfortable you get, how healthy you think you are, how much progress you've made: the trauma, the shadow, your own shadow, will always have the power to frighten you, regress you, empty you of all the bits of joy you thought were hermetically protected.

All because of five minutes, 14 years ago, with a gang member and her gun.

Have a story about PTSD or depression that you'd like to share? Email strongertogether@huffingtonpost.com, or give us a call at (860) 348-3376, and you can record your story in your own words. Please be sure to include your name and phone number.