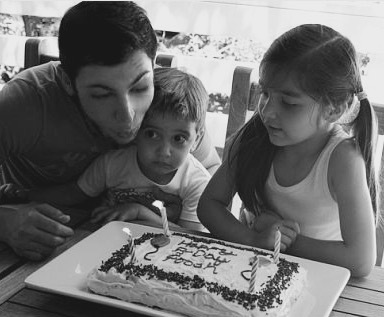 I just had another birthday. I'm not a birthday person and don't make it a big deal. This stems from my childhood that led to some self-imposed conditioning. Having a summer birthday meant that as a kid, my friends and schoolmates would often be away on their family vacations, which translated to very poor attendance at my birthday parties. On my eleventh birthday, exactly one friend attended and he wasn't even a real friend. He was the son of my parents' friends whom I had to invite. The few friends who were in town and had originally claimed would come, dropped out at the last moment for one reason or another. I actually would have preferred to have zero attendance over the one non-real friend who came since I had to make awkward small talk and could tell the whole time he was thinking, "What an awful birthday party" and "this kid's a loser."

After his mom came to collect him and he finally left, I walked over to the delicious double-layer birthday cake my mom made, which had exactly two squares cut out of it, one for me and one for the other attendee, and I just stared at it. My mom came over to me and gave me a long hug. After that day, I trained myself to not really care about birthdays so as to avoid future embarrassment and disappointment. Fortunately, after that fiasco, my family would usually be on our own vacations during the rest of my elementary school birthdays, so I didn't face the anxiety of a poorly attended summer birthday again.

In high school and college, birthdays were usually celebrated by heading out to dinner with a few friends, which was low key and perfect. That seems to continue into adulthood and that's how I celebrated my most recent birthday -- dinner with a small group of friends. While I'm still not really a birthday person, I am a celebration person. I know that sounds contradictory, but it's more an evolution of sentiment that's come with age. See, to a kid a birthday means presents and fun (at least it's supposed to), and the getting older part is actually exciting. Well, birthdays now mean I'm just aging fast and getting closer to death, which isn't exciting, so birthdays have lost their appeal. But, with age comes maturity and wisdom (at least they're supposed to), along with the realization that many of my numbered days are behind me. That last part sucks, but the maturity and wisdom aspect have enabled me to see that because the days seem to fly by until it's years that blend together undistinguished, it's crucial to have markers that stand out. I didn't arrive at this realization via an Oprah a-ha moment but through a bunch of WTF ones. Like, WTF did I do with my weekend....or with my life? I don't think any of us fondly recollect all our work meetings, the hours spent idle in traffic, or grocery store excursions. Those are the parts of life that, while necessary, seemingly blend into an inconsequential blur. That's why I now favor celebrations. Those are the moments that count because they're not just lived routinely, but the times I feel alive. They're unique moments that serve as markers I'll remember.

And by moments of celebration, I don't just mean on birthdays, or weekend nights out with friends. Those are great, yes, but my celebrations often are moments of solitude, such as when I decide to splurge on my favorite, over-priced, New York Times rave-reviewed (which is probably what made it over-priced) iced coffee, while intermittently reading a satisfying book and people-watching.

And while I like both alone time and leisure time with friends, some of the best times are quiet moments with just one or two very important people. One of my most recent favorite ways to invest time and one that's become an informal tradition is binge-watching a Netflix series with my mom. While I tend to not remember the exact plot or dialogue of every episode of whichever series we choose, I vividly remember the things my mom and I talk about between episodes and even the snacks she brings out for us to have with tea while we watch. I reflect on those details and I relish them.

So now, instead of futile reluctance to acknowledge that life is racing by or being regretful of the many, many days spent doing routine things I don't remember because they're mundane and not spiritually exalting, I plan things that will lift me up emotionally. I look for moments that could be memorable and meaningful to me both in the moment I live them and future moments when I reflect and reminisce on them to make me happy.

As "Downton Abbey's" Mr. Carson said, "The business of life is the acquisition of memories. In the end that's all there is." And that's what I endeavor to make and acquire - memories. Not money, but memories. Money has a value and often a decreasing one at that. One's memories are invaluable so he who has made many is a rich man (suddenly I'm an Edwardian).

Anyway, per Mr. Carson's sage observation, as the days-into-years pass by, I try to have distinctive moments that will turn into the memories I can hold onto. Because even that awful eleventh birthday gives me a chuckle (now) and whether or not she knew it, that long hug my mom gave me that day is among my favorite birthday gifts from her and a moment in my life I will always happily remember. So, as you meander through your check list of necessary, but perhaps dull action items, add a few on there that don't have anything to do with Excel spreadsheets, the word "errands," or online bill pay. Throw in some things -- easy, small things even - that, if you possibly remember one future day, can make you smile.