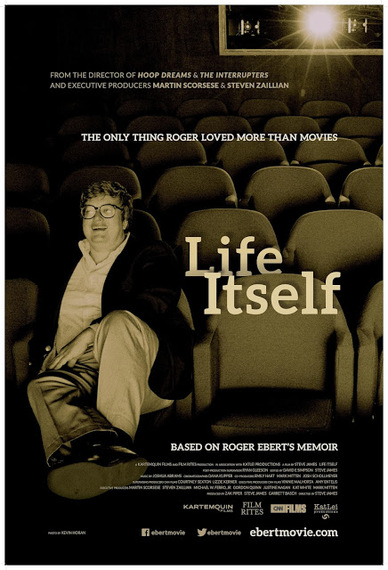 That much I gleaned from watching Life Itself, the acclaimed documentary from director Steve James (Hoop Dreams), which is based on Ebert's 2011 memoir, and is actually streaming on Netflix now.

Rogert Ebert passed away in 2013, and for this documentary James received an extraordinary level of access. Short of seeing Ebert actually die, there is a lot to work with here. It's very intimate, very personal, and at times, very humorous.

Ebert himself is alive for most of it, and he talks to the camera through a text-to-speech feature on his Apple laptop. The rest of it is narrated, with words taken right from Ebert's book, and as a person who hasn't actually read the book, I found a lot of the prose to be beautiful and wistfully romantic. I mention this because the movie would not be what it is without that narration. It's like a drizzle of oil and a sprinkle of sea salt, tying everything together rather deliciously.

As for structure, Life Itself tells the story of how Roger Ebert came to be, and uses standard documentary style, mixing old clips with interviews from friends and family, plus new footage of Ebert, as he deals with his myriad health issues. This approach might initially seem formulaic, but it actually works quite well here, moving the film along at a fairly brisk pace, despite its 2-hour run time.

While the movie is fairly sentimental, it's not a posthumous public relations campaign to present Ebert as an angel. It seems fair in that it shows him to be a prodigious talent, but also paints him ruthlessly competitive, a bit of egotist, and until he's married at age 50, sort of an overgrown child. He's also legendarily combative with his longtime television sparring partner Gene Siskel, whom he doesn't even appear to be friends with. Watching outtakes of them arguing and insulting one another is particularly demonstrative.

There are other uncomfortable moments. In one instance, another legendary critic, Pauline Kael, is discussed. I'm not enough of a scholar on what the real relationship was like between Ebert and Kael, nor do I really care that much, but at one point, Chicago newspaperman Rick Kogan very bluntly says: "Fuck Pauline Kael."

James' decision to include that part illustrates a type of animosity that existed  --  and I think still exists  --between critics who thought movies and movie criticism should be a utility, serving the needs of masses with simple gestures like thumbs up or thumbs down; versus high-minded, intellectual and personal, perhaps serving the needs of only a select, artful group of people.

It's an interesting conversation that happens a third of the way into the film, and I think it's actually an important one, because nowadays, when there are fewer film critics than ever working at the professional level, and cultural criticism itself is being shed from established media institutions like so many other people's salaries long forgotten, who can imagine a time when the business was healthy enough to support that kind of debate?

There are other sobering parts of the film, like watching Ebert, this blue collar guy from Chicago, rise up the ranks and become impossibly famous, despite the fact that he was a recovering alcoholic, significantly overweight and spent his life waxing poetic about other people's art; which is kind of what we do all day on the internet now, except many people do it for free and it is largely terrible. That we've let our new technology overlords build businesses around the latter and not the former, that part is even more depressing. But let me not digress too much.

I use the word sobering to describe Ebert's journey because in this day and age, in this winner take all and then take even more and more and more type of political and economic climate that we're living in, I just don't see that level of opportunity out there for people like that. And that's sad, because in a way, that's a lot of what America still really is.

While I watched this movie, I couldn't help but keep thinking: if Roger Ebert was a 20-year-old today, what would he be doing? Maybe he'd have a Medium publication or a Tumblr or a Wordpress site where he reviewed movies. But maybe after he wrote 100 of them and watched them get buried by a Facebook algorithm, or observed how people just look at a silly number on Rotten Tomatoes to make their decisions about what movies to see, he'd just as soon as throw in the towel and become a bus driver (not that there's anything wrong with driving a bus; maybe it's even more helpful than reviewing movies).

That should take nothing away from the film itself, which paints a portrait of a complicated artist as a young man, but one who eventually grows up to become a wiser, more mature, more loving one, too. There's a lot of love in this film; from his friends and family, but especially from his wife Chaz.

I think the thing that Life Itself illustrates the most, however, is just how powerful and meaningful the act of writing is, for when Ebert's health problems rob him of his ability to speak, he's able to still use the written word to convey what he wants to say. Maybe, as the film quietly suggests, the loss of his voice actually empowered him, made the words count that much more, have more meaning.

A non-writer might find this concept novel in its own right  -- "isn't that cute?" --  but a writer, or anyone who really endeavors to dig deep inside themselves to find some sort of more everlasting truth, might identify with it on a level that is hard to really put into words. In fact, I'm struggling to write or even think about this movie now without tears welling up in my eyes. It touched me that much.

If you have some time, check it out and you won't be disappointed.

Ebert himself might have given it two thumbs up.