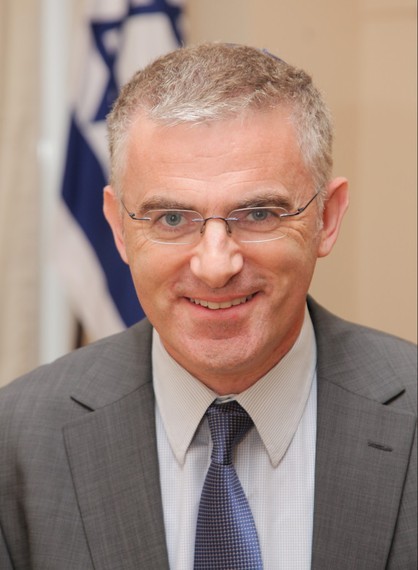 Daniel Taub is soon to bid a "cheerio" to the United Kingdom, where he has served so graciously as the Ambassador of the State of Israel to the Court of St. James for the past four years. A perfect blend of the prim and proper Brit and just enough spicy Israeli wit, Ambassador Taub will be sorely missed. As Michael Freeland at the the Jewish Chronicle so aptly points out: "[Taub] has proved to be probably the most successful and popular Israeli envoy since Shlomo Argov, who was almost fatally shot in London in 1982."

Daniel himself (he eschews formalisms and prefers to be addressed by his first name) admits to a great sense of accomplishment, as relations between the U.K. and Israel are probably as good and as strong as they have ever been. This Q&A with the Manchester City Fan and father of six (plus one grandchild) goes beyond just the serious stuff like Iran, the Israeli-Palestinian conflict and anti-Semitism in Europe, and gets into the more personal details you may have not known about the outgoing Ambassador who saw his first London musical during his final month in the U.K. and soon will finally get some well deserved sleep. He shares some pointers that we all can learn from - in work and in life:

Never Look Back " I'll tell you...At the end of these four years, I really do have a deep sense of satisfaction - you know you can always leave and say there is so much more that you could have done....but, if I compare it to the goals that as an embassy we set for ourselves at the beginning of these four years, I think we have surprised ourselves and the main way in which we surprised ourselves is actually by reaching out further than we thought we could and developing relationships, maybe with new parts of British society, also geographically, we managed to get to places that we hadn't managed to get to before. We opened up Israel information centers in Scotland and in Wales and expanded our Israel information centers in Manchester."

You are What You Read "I try to read books that are connected in some way to what I am doing. For me, a personal delight was the invitation to give a lecture on the image of Israel historically in English literature. I overdosed on an extreme array of the classics. Recently, I was sent an advanced copy of a remarkable book by Yehuda Avner, who was one of my predecessors here as Ambassador in the U.K. He wrote an historical reimagination of what would have happened if the State of Israel had been established ten years earlier, and it is the story of the Israeli Ambassador at the time who was sent to Nazi Germany to get as many Jews as possible to come to Israel. Also on a Stefan Zweig reading spree at the moment."

Over Indulge and Stomp Regrets "One of my small regrets, we haven't as a family taken advantage of the London theater scene as much as I would have liked to. It has been because the work has been so fascinating and demanding, so now, I am officially on my final days of holidays, we are taking our kids to as many London musicals and shows as we can. Last night, we were at High Society, next week we will be at Les Miserables."

Though the Ambassador wouldn't reveal too much when asked what his most guilty British indulgence was, he did make a plug for one of his favorite sweets...

"I still think that Cadburys is still the best chocolate in the world, I have to say."

Take Advantage of Speaking with Both Friends and Opponents Alike - You May Learn Something Though Daniel is known to be a workaholic, he did take time over the years to meet with some of his favorite local figures whether friend or foe. When asked what he did when he wasn't working he blushed saying:

"...In Britain there are so many fascinating people and one of the privileges of being Ambassador is that if there is someone who interests you, than you stand a very good chance of being able to meet with them if you invite them."

Daniel's first great meeting was with her majesty the Queen back in 2011, where he memorably dawned his yarmulke and asked the Marshal of the Diplomatic Corps if he could recite the blessing on meeting a monarch before the exchange began.

"Some of the most interesting people [I met] were those who often publicly were critical of Israel, I meet with them on the condition that I won't make it public, so that we can have those quiet conversations. But if you think about the demographic, its people who are "opinion formers," people who are leaders in the culture world, commentators and so on, faith leaders that I have developed some remarkable personal relationships with - obviously people in the political arena, and sometimes people that were outliers in all types of ways. I certainly hope those relationships will continue because that has been a pleasure and a privilege."

On Being Multidimensional Though Daniel was raised in the United Kingdom, he moved to Israel in his twenties and it didn't take long for him to rise through the ranks, from combat medic in the IDF to speech writing for President Chaim Herzog. In 2011, Taub was appointed Ambassador to the Court of St James's, despite criticism that he was too junior for the position. Taub being the only second British-born Israeli Ambassador to the UK, when he presented his credentials, the Queen asked him how it felt to be serving as ambassador in the land of his birth to which he replied:

"I said that I felt tremendously privileged that it fell to me to raise my children in their historic homeland after two millennia of exile, but I am also aware that in that arc of 2,000 years the greatest period of opportunity for my family was found here in Britain, and I hope to express my appreciation for that by deepening ties of cooperation between our countries."

When asked if he is more Israeli or more British and what the differences are between the two he goes on to say:

" I sometimes joke, having been brought up in the UK, before going over to Israel, I am probably the only Israeli that stands in line, but I am not sure that's entirely true. Israelis are much more direct to the point and have no patience and Brits, well there are different kinds of differences. For example, an Israeli will generally not try to wrap up his arguments, in a particularly sophisticated way. With respect, he'll say this is my case and you either agree with it or disagree with it. In Britain and historically [the English] have more of an emphasis on style and presentation and those sorts of things The thing that's interesting about British people is even if they are critical, they're generally prepared to listen and often they are prepared to moderate their decisions in one way or another with a very good feeling."

Family First "For us as a family we want very much to be back in Jerusalem. We would like our family to be together. I want to work in the Foreign Service for the foreseeable future. I started my diplomatic career as an international lawyer, so I was sent to a lot of peace negotiations, to the U.N., etc. but as a family this is the first time we have traveled abroad together, except for a sabbatical we took in Boston. The hardest thing for us was the family being separated with our oldest kids staying in Israel. The most difficult moments during my posting were the military conflicts that Israel had - there have been two military conflicts in Gaza since we came and we have two boys that are in the army, and as you can imagine to be here and be exposed to the way sometimes these things are presented in the media, when you know you have children on the front lines, it is very challenging. The kids have been extraordinarily supportive and benefited from the experience. I hope it hasn't undermined their ability to get on in Israeli society and they have made strong efforts not to become too well behaved. They have loved it and have made very good friendships, but they are very much looking forward to going back as am I. "