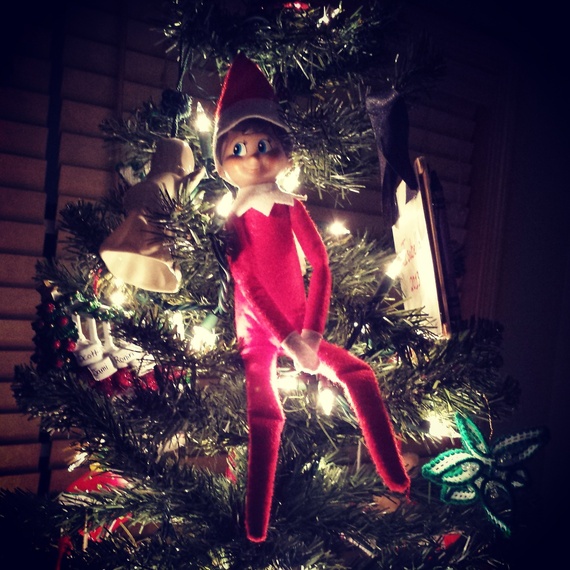 Last year I caved and bought an "Elf on the Shelf." I put it off as long as possible, but was overcome with parental pressure to get one for our family. I held out for so long because I was resentful of the "elf", thinking it was "over-parenting" by the over-achieving parents of my generation who had to take Christmas a step further by inventing more things for our kids to believe in.

On the way home from buying our elf, my kids tossed around names like Buddy, Star and Elfie before we agreed on Toby. My kids were really into this whole "elf" thing, and for a second, I thought they would shape up and behave if only for a month. Once we agreed on a name for our elf, my son started telling stories of his friends' elves. "One elf took off his clothes and was wearing a tutu," he said. Another was making snow angels in flour on their kitchen table while another unrolled an entire roll of toilet paper. Along with a case of buyer's remorse, I was also suffering from a case of anxiety wondering how our elf could top the elves of my kids' friends. An elfish version of "keeping up with the Jones'" if you will. Why didn't I put off this whole elf thing for another year?

That night I was annoyed because my daughter kept asking questions about Toby well after her bedtime. Tired, I didn't want to have to make up more lies for this dumb elf who, in my opinion, could do nothing but bring anxiety to our house. I can say I was a bit like Ebeneezer or the Grinch toward this intruder into our home but he melted my humbug spirit and taught me a few things.

1. He could inspire my kids. I didn't expect the excitement and awe that this dumb, creepy-clownish, 1970s-looking elf would instill in my daughter. She spent two days asking questions about the logistics of this visitor to our house. Even though at first she was creeped out by the thought of an elf roaming around her house at night while she slept, she was trying to logic her way through it. And she eventually grew to like the elf and woke with excitement each day because she got to find him and see what he'd been up to during the night.

2. He'd be better than an alarm clock. I didn't realize how great of a morning starter this elf could be. Our elf inspired my kids to rise early each day instead of sleeping to the last possible minute.

4. That consumerism can be a double-edged sword. You have to spend money on a product, but said product helps kids retain their innocence for a little longer while keeping the Christmas magic alive in their hearts.

5. That there would be a high level of commitment involved. I'm sure there are support groups for elf parents out there... or there should be!

6. The lack of sleep parents get. I'm sure I am not the only parent who has awoken from a deep sleep, heart pounding, because you forgot to hide the elf. Only you find the elf is not in the last spot you left him, so you have to wake your spouse at 2:30 a.m. to find that he already hid the elf and now you're both awake.

7. The amount of acrobatic skill it takes to jump over three slumbering kids in an effort to hide the elf because you forgot the night before. My personal record is hiding it on a Saturday morning exactly three minutes before my kids woke up.

8. The lengths to which a parent will lie to keep the elf a secret. The hardest part is remembering all the lies you've told about the elf because heaven forbid you say something to contradict a lie you've already told. Also if you forget to move the elf, the lies you have to tell to keep the ruse going. "Elves get tired... hung over... the road to the North Pole was blocked... Santa was away so our elf couldn't report to him."

9. The ongoing challenges an elf poses. For instance, 1. Having to hide it somewhere where my kids won't find it after Christmas. 2. Having to remember where I hid it next year. 3. Remembering to hide it each and every night all over again. 4. Remembering all the things our elf has done year after year so as not to repeat anything. 5. Thinking of new things our elf can do to top my kids' friends' elves.

10. How much I longingly remember our lives before this elf. The days when I had to keep only one holiday ruse going and not two. How much I have a new-found appreciation for those parents who've had elves in their homes year after year. You are better people than me. In fact in the whole realm of parenting, if you've managed to survive at least one year with the elf in your house, sanity intact, you belong on the golden pedestal of parenthood!

I'd like to say that was the first and only year with our elf but with the money invested, lies told, sleepless nights and anxiety, I feel we've come too far and there's no going back. Of course this year there could be an elf shortage, transportation issues at the North Pole, or our elf could be magically reassigned to another house. The possibilities are endless!

More:
Elf on the ShelfParenting ParentsChristmasChristmas traditions
Newsletter Sign Up
Raise the kind of person you'd like to know
Subscribe to our parenting newsletter.
Successfully Subscribed!
Realness delivered to your inbox