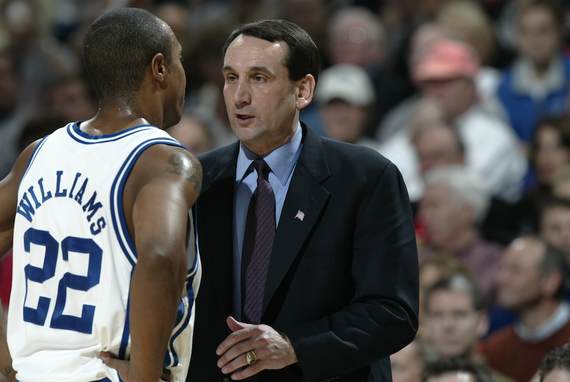 It's not every day you get to hear what really happens on the court -- as the final seconds tick down to a NCAA national championship.

But that's exactly what happened to me on Friday when I had a chance to chat with Duke legend Jay Williams -- about his personal experience in the 2001 championship game against Arizona.

"The clock was ticking down," Williams told me. "And we knew we were about to win. But it's Chris Duhon that I remember most."

Duhon, his teammate, motioned to Williams to get his attention. Williams remembers thinking, "what's going on?"

"Your dream," Duhan told him. "Remember to throw the ball in the air."

At the beginning of basketball season, Duke's head coach Mike Krzyzewski had every member of the team stand in front of each other and present their success outlook -- a twist on today's popular vision boards. As Williams tells the story, several guys talked about future lives with wives and families.

"I had a different vision," Williams told me. "My dream was to win the national championship and be on the court throwing the ball in the air as the clock dwindled down."

Which brings us back to one of Williams' most treasured memories of that championship game.

"My teammate remembered my dream," shared Williams. "And he made sure my dream came true. How incredible is that?"

Probably a good word to describe the life of this college basketball giant.

Incredible talent. That year Williams earned NABC Player of the Year honors as well as earning both the prestigious Naismith Award and Wooden Award as College Basketball Player of the Year in 2002. That same year he was the second overall pick in the NBA Draft.

But there was also incredible tragedy in 2003 when a near fatal motorcycle accident ultimately ended his basketball career, and sent Williams into what he told me was "a very dark place."

His story also contains -- today -- incredible inspiration and a journey of meeting adversity head-on as he learns to let go of his past and push forward to a new future. Today he is a well-known and highly popular analyst and announcer for ESPN.

But he hasn't for a moment forgotten the many people -- like Duhon and his teammates -- who have been a part of that journey.

At the top of the list is Coach K. One of the first people to be by Williams' bedside in Chicago after his accident.

"Coach K was in Vegas," Williams recalls. And he jumped on a plane instantly. "This man is so much more than a coach."

And Coach K's visit was much more than a typical hospital visit.

"Coach K handed me a pendant and he told me to return it when I was back playing basketball," said Williams. "I didn't think I'd ever walk, yet there he was giving me every bit of strength I needed."

Coach K, who Williams also describes as a coach who was "difficult and demanding" also taught Williams that is was okay to be caring. And how to express yourself.

"When Coach K gave me that pendant, he cared enough to help me visualize my next play. I was going to get through this."

And get through it -- and beyond it -- he did. Not on the basketball court. But with a new life that he never imagined possible.

He's making it his mission to share his journey and help others. During March Madness, he's teamed up with other NCAA legends to share their "Real Strength Moments."

But for Williams, his journey goes far past March Madness. He's living a life grounded in philanthropy and helping others realize their own dreams. As well as their own next play.

As for the pendant from Coach K?

"I never did give it back," Williams admits. "I probably should. But it means too much to me."