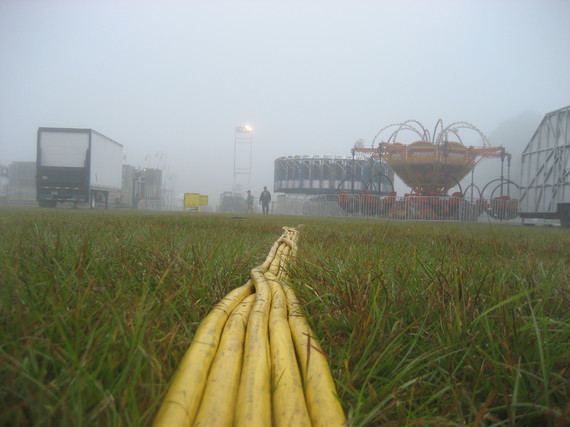 "When I die you will find swamp oak written on my heart."
Henry David Thoreau

Monday morning fog engulfed the Okefenokee Fair grounds on set-up day as lead lines led the way to unfinished rides. I worked all night and all day till 11 pm. I slept in a sleeping bag under the tin roof of the outdoor livestock arena.

I've learned a few things about the area already. Waycross, Ga., where I am now writing from in a McDonald's, is the closest town to the biggest blackwater swamp in America. Its name in Native American means, "land of the trembling earth" because of the 438,000 swamp prominently features peat.

It does my Irish heart good to be so near so much bog, but the 'swampers' who live there are mostly of old English stock, retaining Elizabethan syntax and phrases.

I've yet to tour it but it is home to many carnivorous plants and alligators. I have a picture in my head of the wading birds, including herons, egrets, ibises, cranes, and bitterns.

I have toured the local library -- like an ugly friend, ordinary on the outside, beautiful on the inside -- and was struck to find out Henry David Thoreau is considered by some to be the "patron saint" of swamps.

Thoreau wrote a lot about the fog and miasma I've witnessed this week, surrounding a carnival so bright and spinning, filled with laughing, happy creatures.

Pop culture references to Okefenokee include the cartoon strip "Pogo" who lives in the swamp. It's also the residence of "Scooby-Dum" the slow-witted cousin of Scooby Doo.

On set-up day, I set-up kiddie cars with a 17-year-old kid with a full beard. His family lives on a farm on the swamp's border and raises everything from chickens to hogs.

His step-daddy chided him about being a 'hog farmer.' it was cold so he wasn't wearing overalls like L'il Abner but that kid was so strong, he lifted ride cars like a Chicago grifter spins quarters across his fingers.

These people are so interesting and I'm listening for the colloquialisms but my mind is also other places, specifically ... Peru.

Amusements of America, one of the top two biggest carnival companies in the country, is sending games and rides people to Lima, Peru for the winter to earn money.

If I go with them, I'll miss Christmas with my daughter. But I'm thinking of going, as a pursuit of another angle to the carnival business.

The games boss talked to me last night about it. I don't speak Spanish and I don't see how I'd get Peruvians to play games without using language to bamboozle them into loosing more money than they can afford for prizes nobody needs.

Two carnies came up to my KiddyLand ride on Monday and one young man said, "You got to watch out, it's dangerous in Limer."

His carny girlfriend then slapped him over the head, like Moe hit the stooges. Bang!

Big A, as it is called in the industry, is having trouble finding American carny help, as one old time carny said, because almost everybody has a felony record.

This is the time of year many carnies are asking themselves similar questions. Last night, I listened to a carny tell me he is going to retire and go back to being a cook, "I think," he said.

I need to sell my year in traveling carnivals to an agent or publisher, I could use these winter months to track down leads and write that book.

In the meantime, my passport is in my pocket. I'm surrounded by walking felony records and one 'big monkey.' And I ain't afraid of no lemurs.

Still, out of that swampy fog that comes at morning these November days I hear a distant voice, my own, "Where next."