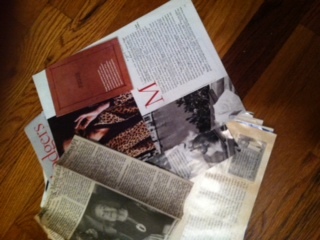 Over the weekend, I was helping a friend sort through decades -- actually almost half a century -- belongings of a woman named Doris. I never met Doris. But I learned a lot about her life and personality by spending hours in her $130 a month rent controlled fourth floor walk-up.

Doris had been moved into a home over the winter when her health no longer permitted her to live alone unassisted. I am hoping to meet her someday soon -- on one of her better days -- because from the photographs, her collection of pop art from NYC in the day, unusual artifacts from around the world and fantastic collection of clothing/furs from the 1940's, 50's and 60's -- she seems like she has led quite a fabulous life. However, what spoke to me most of her belongings were the notes she made throughout newspaper and magazine clippings where she would comment and sometimes "talk back" to the author. She had even added her name neatly in small penmanship to a list of mentioned houseguests [Jean Cocteau, Cecil Beaton, Tennessee Williams, Truman Capote, Somerset Maugham, Saul Steinberg, Alberto Giacometti and Jean Arp] at Peggy Guggenheim's Palazzo Venier dei Leoni on Venice's Grand Canal. Could she have been there?

I was sorting through a number of old brown expanding accordian folders stuffed with paper --clipped articles mostly on artists, but occasionally a number of political topics received her sharp commentary. She was obviously a very liberal and individualistic woman in her time and expressed herself in the margins with pointed questions and a conversational style. My friend would provide pieces of the narrative of Doris's life when I admired a particular object, pointed to a pile with a questioning forehead or handed her a letter or journal.

Her life could easily be made into a book, and then perhaps a movie. Let's just leave it at that, for privacy's sake! It seemed she had the famous acquaintances, an international cast of characters as friends, the flamboyant personality, a colorful past, and the costumes and props all around me were setting the scene.

Seeing Doris's black ink handwriting all over her small apartment in unexpected places, such as on the wall, made me smile whether she was observing the weather, commenting on how she was feeling, noting lunch dates or complaining "1970 Was the Worst year of my life." She documented and chronicled everything. And the reason I smiled was not because I thought her peculiar or eccentric, but rather because I have the same habit. I wrote on whatever and wherever I needed to. I have trunks and trunks of books I have written in since I was a child.

I have always known the practice of writing down my thoughts, feelings, observances, experiences to help me process and sort through my frequently overstimulated mind and overwhelmed heart.

When I was a young girl my mother smartly encouraged me to write down what I was experiencing one afternoon when I was scared during a bad thunderstorm. Thus the daily practice began capturing the mundane and otherwise. Somewhere I have my scrapbook of newspaper clippings and noted confusion of emotions when we were evacuating the Three Mile Island meltdown in 1979. When my mother died unexpectedly when I was 14 -- writing became my shelter as well as an escape as I documented the absurdity and adult dysfunction of the new life I was thrust into.

My obsessive note taking and extended "mind-spills" as I called them fill many trunks in my storage spaces in Brooklyn and Pennsylvania. I have often thought about the physical and emotional heaviness of lugging all these memories and experiences around, not to mention the thousands of dollars in monthly storage fees x decades= $$,$$$...

It was not until I started volunteering at StoryCorps and got involved with other oral history projects that I started to research an assortment of words and terminology seeming to capture and explain what Doris and I were doing. Life narratives, self-authoring and a rearranging of similar type words expressed the attempt to find meaning, purpose or resolution in one's life by writing about one's experience. It could be done informally in bursts and purges or purposefully in a therapeutic situation. I was even finding college programs offering this as a discipline. I have much more to research and explore about this complex topic, but I get it. Even without getting it.

Doris did too. As we feverishly write down fleeting feelings and capture glimpses and observations the accumulated collection of words describe our interior landscapes as we press forward in the noisy confusing external world. We might not be making sense of our experience in the moment, but the act of finding the right words and committing them to paper, helps us to process and document time that moves by too quickly. Often looking back on old writings, I have found similar repeating cycles in my life every couple of decades. External situations will be different, but my internal experience still feels the same. Sometimes just reading of my existence with a bit of distance allows me to find the humor or perspective needed.

Whether an audience or readership is needed to validate the written recollections can be argued. The simple act of glancing through decades of one woman's perception offered me a glimpse into a life well-lived and gave her a voice and self-authorship encouraging me to keep at my written word for myself for perspective -- if nothing else.

Writer, researcher, collector of oddities and "tourist" wherever she goes.