Evidence that Mars once harbored alien life continues to mount.

Just weeks after NASA's Curiosity rover detected spikes of methane in the Martian atmosphere--possible evidence of biological activity--a prominent geobiologist says she sees possible signs of past life in photos of the Martian landscape taken by the rover.

"We can detect sedimentary structures in rocks on Mars using the rover images," Dr. Nora Noffke, an associate professor at Old Dominion University in Norfolk, Va., told The Huffington Post in an email. "The structures I describe belong to a group of microbial structures that form by the interaction of benthic (living on the ground) microbes with sediment dynamics (erosion) in clastic deposits such as sand."

In other words, if such structures do exist on Mars, that suggests the planet may have once harbored microbial life. The microbes would have existed on Mars less than 3.7 billion years ago, Noffke said.

For her research, Noffke looked at the structures seen in rocks on Mars and compared them to geological structures on Earth that are formed by microbes living in communities called microbial mats.

"Mats are composed of trillions and trillions of microbes that assemble on the floor of lakes, rivers, oceans," Noffke said in the email. "The microbes communicate with each other, they arrange into a dense layer and collaborate in gaining nutrients and light."

In the abstract to a paper describing her research, Noffke detailed the similarities found between the structures on Earth and Mars:

"The microbially induced sedimentary-like structures (MISS) identified in Curiosity rover mission images do not have a random distribution. Rather, they were found to be arranged in spatial associations and temporal successions that indicate they changed over time. On Earth, if such MISS occurred with this type of spatial association and temporal succession, they would be interpreted as having recorded the growth of a microbially dominated ecosystem that thrived in pools that later dried completely." 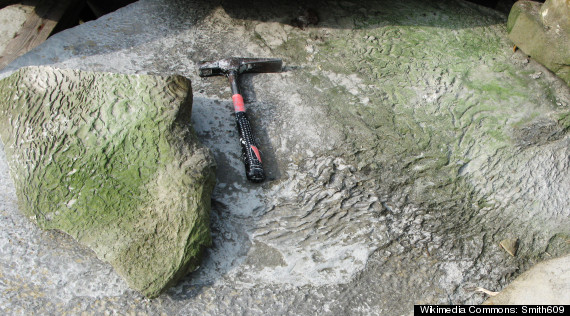 A sedimentary structure that formed beneath microbial mats on Earth.

What do other scientists make of the new discovery? Dr. Chris McKay, a planetary scientist at NASA’s Ames Research Center in Moffett Field, Calif., hails it as promising research.

“I’ve seen many papers that say 'Look, here’s a pile of dirt on Mars, and here’s a pile of dirt on Earth. And because they look the same, the same mechanism must have made each pile on the two planets,'" he told Astrobiology magazine. “That’s an easy argument to make, and it’s typically not very convincing. However, Noffke’s paper is the most carefully done analysis of the sort that I’ve seen.”

McKay is also an associate editor of the journal Astrobiology, which published Noffke's paper online on December 11, 2014.

1 / 48
Curiosity's First Color Photo
Curiosity snaps the first color view of the north wall and rim of Gale Crater, where NASA's Mars rover landed Sunday night. The picture was taken by the rover's camera at the end of its stowed robotic arm and appears fuzzy because of dust on the camera's cover.
NASA