A new study from NASA postulates that if life ever existed on Mars, it was probably underground.

Ever since clay minerals were discovered on Mars in 2005, scientists have thought warm and wet conditions that could have supported life may have existed, according to NASA. That's because clay is formed when water and rock interact with one another.

SEE SLIDESHOW BELOW FOR INFRARED IMAGES

And conditions on Mars aren't especially conducive to water above the planet's surface.

But there's a problem with Mars' atmosphere - it is not thick enough now for water to be retained on Mars' surface, and there is no scientific consensus that it was ever thick enough in the past to have allowed water to remain on the surface.

According to NASA, the study, which is published in the current issue of the journal Nature, backs up a hypothesis that warm water was present only on the planet's surface for geologically short periods of time.

But don't worry -- this doesn't rule out the possibility of life on the red planet.

"If surface habitats were short-term, that doesn't mean we should be glum about prospects for life on Mars, but it says something about what type of environment we might want to look in," Bethany Ehlmann, the lead author of the paper and a scientist at NASA's Jet Propulsion Laboratory, said in a statement. "The most stable Mars habitats over long durations appear to have been in the subsurface. On Earth, underground geothermal environments have active ecosystems."

But we can't rule anything out. Space.com notes that just because the water on the surface was only present for a short time doesn't mean it couldn't have been habitable.

NASA's Curiosity rover, a mobile science lab that will continue to study whether or not there was life on the red planet, is set to launch on November 25.

The rover vehicle Opportunity, which is currently operating on the surface of the red planet, has sent back some stunning pictures. Last month, NASA released a video composed of images taken during the Opportunity's three-year trek.

ABC News reported in August that NASA has been looking for evidence of water on Mars for 15 years.

LOOK: Clay Minerals in Craters and Escarpments on Mars:

NASA: If Life Existed On Mars, It Was Probably Underground (PHOTOS) 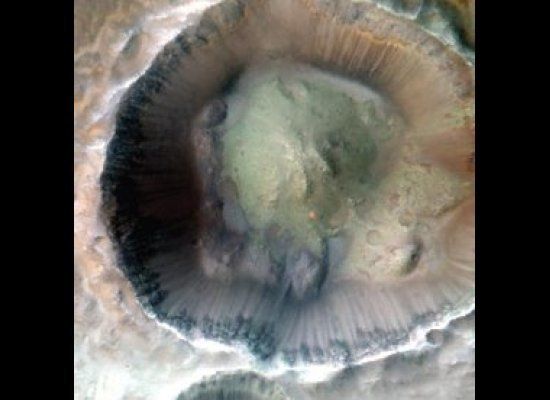 1 / 4
<a href="http://www.nasa.gov/mission_pages/MRO/multimedia/pia14764.html" target="_hplink">According to NASA</a>, the Martian underground is visible in this false-color infrared image of a six mile-wide crater. Click to the next slide to see the mineral composition.
NASA/JPL-Caltech/JHUAPL