I've always regarded asteroids as somewhat like dinosaurs: mildly interesting and faintly dangerous. But I'm now thinking that they might be a profitable real estate investment.

As any astronomer (including this one) will tell you, asteroids hold the answer to a perennial puzzle about the formation of planets. In particular, how do specks of senseless debris organize themselves into balls of rock and vapor -- a few of which could be homes for life?

That's why we should study asteroids, from the science point of view. But a recent talk by Marc Rayman, chief engineer for NASA's Dawn mission, impressed me with the many other reasons to be interested in these primordial rocks.

An obvious one is well known: They're dangerous. Asteroids are nature's kamikazes, cruising the solar system at tens of thousands of miles per hour. They could take out a city or worse. Last year, a house-sized rock lit up the skies above the Russian city of Chelyabinsk, providing a nice example of why this menace is more than hysterical paranoia.

It's a threat to take seriously, and the first step in giving humanity a chance against these peripatetic impactors is to find as many as we can. Reconnaissance is first, defense is second.

Apollo astronaut Rusty Schweickart and his B612 Foundation are working on the problem. They hope to boost the inventory of known Earth-threatening asteroids from 10,000 to about a million. That would give us a handle on many of the smaller rocks that -- while not on the scale of the asteroid that wiped out the dinosaurs -- could still toast Cincinnati. Know your enemy.

But there's another aspect of asteroids that warrants our attention: They could be an insurance policy for our long-term survival.

That bizarre notion ultimately derives from the fact that the Earth is a ball. Somewhere in your mathematical upbringing, you may have learned that a sphere has the minimum surface area for its volume. Put another way, by shaping stuff into a ball you get the least amount of acreage per cubic foot of material. The Earth would have more surface area if it were, for example, a cube -- although this would present a driving hazard at the edges.

So if exploiting natural resources is what your society does, then living on a ball is a bummer. Most of the good stuff sits unreachable and largely useless, hunkered down in the planet's unseen core.

Dicing up your world could help. Imagine cutting our planet in two, and then rolling up each half. Two balls instead of one, and you'd gain 26 percent in surface area, allowing more room for shopping malls. But why stop there? Cut each of those balls in half, and you gain another 26 percent. Et cetera and ad infinitum.

It's conceivable that subdividing the Earth in this way won't get approval from the Environmental Protection Agency, but no matter. Nature has done this for you -- producing millions of small balls (and an assortment of other shapes) called asteroids. They're the leftover building blocks of a failed planet just outside the orbit of Mars. This world never got built, thanks to endless interference by Jupiter's gravitational field.

These rocks are a resource. The fact that they're in small chunks makes mining them as appealing as cat videos. And at least two companies are considering doing just that. The consequences could be mind-boggling. According to John Lewis, chief scientist for Deep Space Industries, if humanity can improve its recycling efforts, then ores smelted out of just the nearest asteroids will supply the needs of 80 billion of us until that distant day on which the sun dies.

That sure beats the slow and inevitable impoverishment that will be our fate if we confine mining to our own back yards (or preferably someone else's back yard). The asteroids aren't so much a renewable resource as an endless one.

Some of the small bodies in the solar system could be our future homes. No, not so much the asteroids -- to begin with, they're going to have the look and feel of an open pit mining operation, as Lewis notes. Maybe that's not the best neighborhood for raising your great-grandkids. And in addition to their distasteful Virginia City ambience, they're also lacking in the light elements that are necessary for food and life in general. These rocks are a hard place.

But in the dim outer pickets of the solar system -- beyond Neptune, and up to tens of thousands of times farther than the asteroid belt -- is the bulk of the solar system's colossal collection of ice balls. Depending on how far out you go, these are referred to either as Kuiper belt objects, or comets of the Oort cloud.

They have water and the light elements that are missing from the asteroids. And thanks to being small, I figure they collectively have a billion times as much acreage as Earth.

True, there's not much sunlight where the comets are, but physicist Freeman Dyson has suggested that big, easily built mirrors could shine a little light on cometary colonies.

It may all sound far out and fantastic. But if you step back from your day-to-day headaches for a moment, and ponder our species' long-term prospects, well, small is beautiful.

So while many consider rocks in the sky to be like sharks, cruising the solar system and occasionally wreaking havoc and destruction, I see them as both a mother lode and a future home. Anyone want to float me a loan? 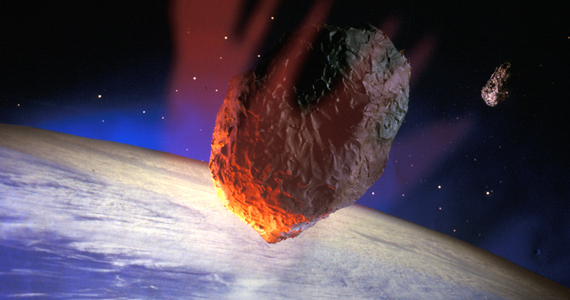