That is because egg-producing chickens spend their entire lives in barren conditions, several chickens cramped in a cage with personal space that is smaller than an 8 1/2 x 11 sheet of paper. These chickens cannot spread their wings or do anything else that comes naturally to them like pecking or grooming or acting like, well, chickens. Battery cages are cruel and unusual punishment for creatures who did nothing to deserve such treatment. The same is to be said for pigs in gestation crates and baby cows in veal crates. 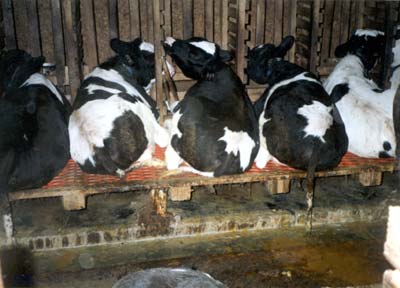 That's why I'm looking forward to Election Day, when my fellow California voters will turn their attention to a unique and important proposition that will phase out some of the state's most cruel and inhumane factory farming practices.

Proposition 2--the Prevention of Farm Animal Cruelty Act--will simply ensure that certain farm animals in California can turn around and extend their limbs. When approved, it will phase out three of the worst factory farm abuses: veal crates for calves, battery cages for egg-laying hens, and gestation crates for breeding pigs. 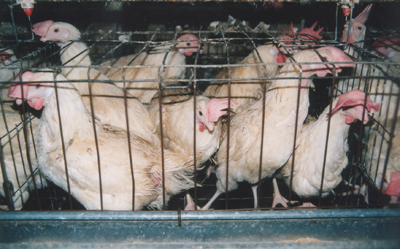 It's not much to ask factory farms to merely give animals a bit of room to move, but as we saw earlier this year with a shocking undercover investigation into a California dairy cow slaughter plant, we can't trust factory farms to regulate themselves.

It's early in the election cycle, but there's already a tidal wave of support for Prop 2, with hundreds of endorsements including Senator Feinstein, The California Democratic Party, San Francisco Mayor Gavin Newsom, and city councils like Los Angeles and Davis. Groups like The Humane Society of the United States, Center for Food Safety, Center for Science in the Public Interest, and Sierra Club-California have endorsed, as well as hundreds of California veterinarians and the California Veterinary Medical Association. Almost 800,000 California voters signed petitions to place the initiative on November's ballot.

At the same time that humane groups are getting the word out about Prop 2, agribusiness companies and factory farms are funneling millions of dollars into a massive opposition campaign. This is despite the fact that Arizona and Florida voters have overwhelmingly approved similar citizen initiatives, and state legislators in Colorado and Oregon have passed similar laws.

For those of us who care about animal welfare, there's never been a better time to donate and get involved--even for people who don't live in California. Watch this new video about Prop 2, and then make a donation or volunteer to support the campaign.