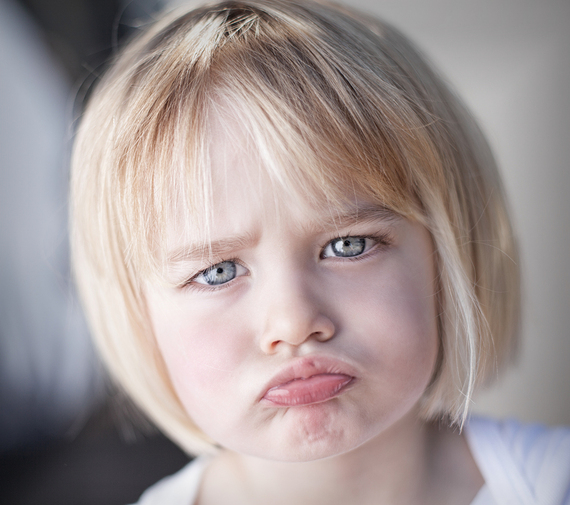 It's hard out there for a toddler! We're not quite old enough to be able to do what we want but that's hard because we most definitely know what we want! Sometimes though, it's really challenging to get parents to follow our commands. They're my mom and dad so shouldn't I just be able to send my messages to them telepathically? I've tried and tried but they're too hard-headed to get it! What is WRONG with them?!

Like I said, it's tough being toddler. I've talked to other toddlers and they agree that something needs to be done (what else do you think we talk about at play dates...while you're talking to the other moms about us, we're talking about you too). Here are some of our biggest complaints:

My sandwich was cut into squares when I wanted triangles...seriously! I wasn't having that so I showed mommy...I threw the sandwich on the floor and had a screaming fit!

I wasn't allowed to leave the house with just a shirt on. I really don't get why pants are such a big deal anyway!

I was forced to go to the grocery store against my will. Mommy said we needed food but I know she was just running low on wine!

I get stalked at the pool! Seriously, I told grandma and grandpa that I wasn't going to fall in...I am perfectly safe running around the edges of the pool, at the deep end, with no flotation device whatsoever! If they keep following me around like this, I may need to apply for a restraining order.

I simply do not understand why I'm not allowed to cut my own food! Seriously, how sharp can a knife really be anyway?!

My parents would not let me watch another cartoon! I'd only watched 4 (in a row) and the sun was still out! The Handy Manny ending was a real cliffhanger...I simply had to see what happened next! The answer was still no so I showed them...I threw the remote on the floor and had a screaming fit!

What is the friggin' deal with picking up my toys?! You know I'm just going to dump them right back out again anyway. Seeing the floor is so overrated.

Speaking of toys, why is my big sister ALWAYS playing with the toy that I want?!!! Yes, I realize that I've had zero interest in it for the last three weeks but as soon as she picked it up, it looked so much more interesting! It's my toy...mine, mine, mine!

It was crazy! My mommy peeled my banana when I didn't want it peeled! Then the very next time I wanted a banana, she gave it to me with the peel still on. Didn't she know that I wanted her to do it this time? I showed her...I threw the banana on the floor and had a screaming fit!

I don't understand why nobody would buy me that big ball at the store today! Yes, I realize that I have four of them already (and I had to throw a screaming fit to get the last two) but I REALLY wanted it! That's really all that should matter!

Give me one good reason why I can't wear my princess dress to to a restaurant! It's long and nobody will see that I'm not wearing pants...surely that's a plus! I think I'm about to have a screa...wait, they just gave in! Screaming fit averted!