This is part two of an interview with Paula Durbin-Westby, an (at times) non-speaking autistic adult who made this YouTube video as an example of what happens when she tries to speak during periods when she cannot. To read part one click here.

AZ: Paula, can you talk more about the idea of language and thinking?

I have read more than one author who opines that without language there is no thought. Nothing could be farther from the truth. Language includes both written and spoken words, as well as picture-based communication systems like PECS. Not talking (and also not writing) does not equate with "not being able to think," "being lost in an unknown world" or anything other than specifically not being able to talk. For some people it could mean a lack of focus on the present moment (how many people are fully present in each moment anyway?) or not being able to think in words, which is another one of my reasons for not talking. But it is not, generally speaking, accurate to assume that because a person can't talk, they can't think. You wouldn't look at someone who has a tracheostomy tube and go "Oh wow. That person can't think!"

AZ: Were you surprised by the comments you received after you posted your video online?

I was amazed, and also a bit dismayed, that people, including some professionals, really do not understand that being able to produce speech and being able to think are not related. The most disconcerting comments were from people who were told by professionals that it was not possible for their child (or themselves) to lose speech. When assumptions like these are made, opportunities for meaningful communication with autistic children and adults are lost, including opportunities for the further learning of language (not necessarily speech) capabilities. A couple of parents indicated that they were planning to forward the video to professionals or family members, in order to help explain that, yes, we can lose speech temporarily, or need to use other-than-speech capabilities and technologies at times.

I was also surprised that my video was one of a few, or perhaps the only, video out there showing someone who usually speaks having periods of not being able to. Some autistic people wrote in saying that I had accurately captured their experiences. The number of films by or about mostly non-speaking people is growing, but to my knowledge there are not videos of people who have intermittent speech. I encourage more autistics to post videos and write articles about speech loss/intermittent speech/non-speaking times. We learn so much from each other, in ways that are different from "therapy" or "intervention." It is important to have a body of knowledge on this topic that we ourselves have created and that we can consult, and that can also assist non-autistic parents, educators, and professionals. I don't know that there is a profound difference in the reasons for not speaking between autistics who do not speak at all and those of us who lose speech temporarily or have other speaking difficulties. I tend to think that there isn't, and I can't always rely on experts to provide the answer, given that so many of them still do not realize the phenomenon exists.

Several people asked me about what it was like to be "locked in a non-verbal world," wondering if I were in some sort of dream state or alternative universe at those times. Actually, I just can't talk. I assume that my overall differences in my processing of the world as an autistic person are still there, but my own experience of it is that I am experiencing things just the same as I usually do, although it might be different than how a non-autistic person experiences things.

I was glad to see these questions, as it gave me an opportunity to think about how to explain the connections between speech and cognition to a broader audience. Again, if an autistic person can hear and process speech, they are probably able to understand it, even if they cannot speak, and even if they cannot (yet?) use writing technologies. I tend to assume that autistics (and people with other communication disabilities) do comprehend what is going on around them/us, in our own ways. In your last piece on The Huffington Post, you addressed Henry Frost's fight for inclusion in his own school district. Several commenters averred that if Henry can't talk, he is not intelligent, and that someone is writing for him. People just can't seem to grasp that someone could be able to write and use language in other-than-speaking modes. Think about it; you probably aren't talking and typing at the same time. Henry does not speak, but can type. I can do both, but at times I cannot speak. All three of us (the non-autistic speaking person, the person who does not speak, and the person who has intermittent speech) can type, but during those times, not one of us is yakking away!

For this interview's video, I have added another segment that I made on the same day I made the first video. In it I hold up a sign that says "All those blog entries I write? I wrote them myself," and then "So many non-verbal people get that 'Oh, she had someone do that for her' stuff. Just had to say that." I was thinking about people who don't speak at all, and how their intelligence is poorly understood, questioned, or disrespected. I am privileged because people can see that I do both, and since I can speak, I will often be presumed to be more intelligent than someone who can't, even if it's not true.

AZ: What is it like when you're unable to speak while in public and are expected to?

It's a bit nerve-wracking, but only in situations where people do not know me well and are expecting that I can speak like a non-autistic person. I try to anticipate what I will need to be able to communicate at those times, but I can't always build in my own supports. When I am with friends, it's no big deal if I can't talk or have intermittent or halting speech, but in work situations it's more difficult for me to feel calm. It's an ongoing process for non-disabled people to learn about communication differences and to anticipate them so that autistics and other people with communication disabilities aren't doing most or all of the work to create our own accommodations. For successful communication to occur, all communication partners should share responsibility.

AZ: How do people react to you?

Really, I mostly don't get reactions, because often the times that I can't speak coincide with the other person continuing to talk, maybe because they think I don't have anything to say, or they think, "Well, if she's not going to talk, I will!" I do get all kinds of reactions, from total acceptance to "You could if you wanted to -- try harder" kind of thing that made me feel sad when I was making the video. Sometimes people don't believe me when I say (in speech or writing!) that I have trouble talking. This video ought to make that clear! I have to be very precise and say that I mean not being able to talk at all. I have learned that "trouble talking" might mean not saying the right thing, or stage fright, and "I can't talk right now" can mean "I am too busy to deal with you" rather than that I literally am unable to speak with words coming out of my mouth! I have had a few mixups when people did not know I meant "I can't talk right now" very literally. Sometimes people just don't believe me and think I'm making it up. I'm not sure why they would think I would go to that much trouble! There are also people who have never heard me stutter, who think that I don't, even though I tell them I do. I have a video of that, as well, and will post it at some point, mostly to show people who know me the different ways I can or can't access speech.

AZ: Are there things that help you speak when you are not able to or having difficulty?


I mostly just have to wait. I don't particularly want to talk a lot, but I need to. It's just one of those things that is expected, and it is expected that if I can do it some of the time, I can do it all of the time. It might seem that someone who can speak but loses speech at times would want to find strategies to prevent speech loss, but I often welcome not being able to talk. It gives me a break from the exhausting task of speech production. I also get very overloaded by hearing other people talk, as it challenges my auditory processing abilities and I can only process talking for a short time. If other people, whether or not they can speak, would use text-based communication with me, I could get a lot more accomplished. If writing is not that person's strongest form of communication, it will be a limit for that person, but we should not be expected to always accommodate "talkers" and not the other way around. It does take extra effort on my part because people can't tell just from looking at me that I am a person who sometimes can't access speech.

Paula and her son's messages to each other: 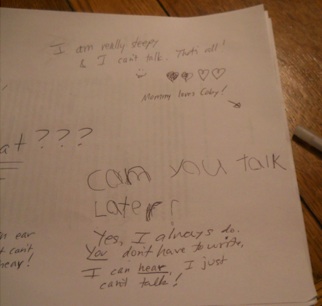 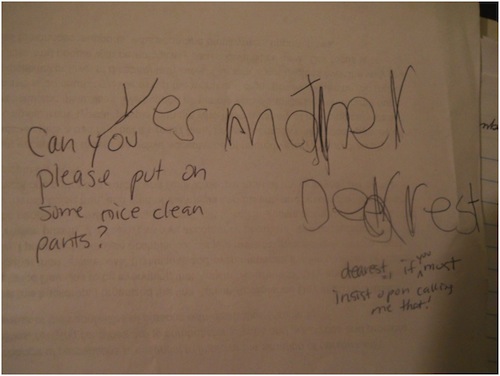