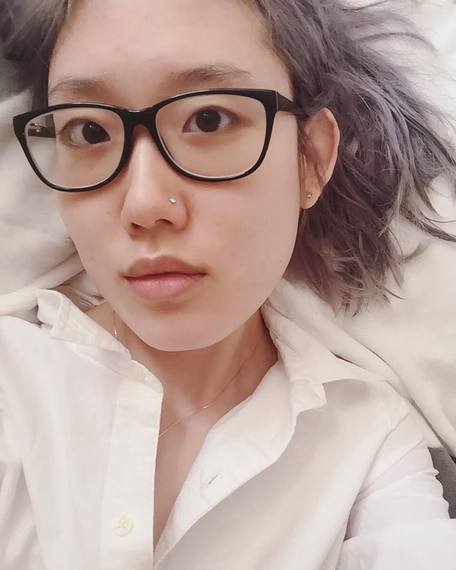 Jasmin Kim is a queer trauma survivor, social activist and poet. She has worked with Asian-Americans for Equality and the Dallas Area Rape Crisis Center. She is currently pursuing a degree in Medicine and Public Health at Hunter College and studying Global Health, Human Rights and Public Policy. In our self-care interview, we discuss her journey to being diagnosed with borderline personality disorder (BPD).

What's been the hardest part about self-care for you?

The hardest part was simply knowing what was wrong or if there was even a problem. Because I grew up with a family that normalized trauma, it took me 16 years to realize maybe something was wrong. I didn't realize that suicidal ideation was not normal. I still have a really hard time figuring out what is and isn't normal. I hate it when people go, "Oh, what is normal anyway?" I want to know what the majority of the population is going through versus what I'm going through. I find it very patronizing. We're not talking about a hippie existential crisis you're having. This is what I need.

You've had different diagnoses throughout your life. Why is that?

A lot of people have. The tricky part about mental illness is if you're younger than 18, it's hard to tell what is just teenage, hormonal stuff. I have BPD, but even if I displayed some of those symptoms, it was still hard [to tell].

People say, "Don't label yourself." But for people with borderline personality disorder, we need labels because we have no sense of identity. This is not an existential crisis that everyone goes through and for those with BPD it's like, "Am I just imagining that I like this color or do I really like this color?" It's a mind game, so you're constantly battling yourself. It becomes tricky when you start attributing your illness with your identity.

How do you deal with triggers?

For the longest time I didn't know what my triggers were, but now I can prepare and let people around me know. I over-prepare, but I still don't think I deal with things very well. I have a very strong defense mechanism where I internalize and dissociate, and then it comes out later. It's hard, but knowing and identifying triggers is the first step.

Do you prefer not to tell people about your diagnosis, or the opposite?

I either withhold everything or spill everything, and I need to find that middle ground. Up until 18, I didn't share anything about myself and it wasn't fully intentional. When you're in the mental health system, you have to tell your story over and over again, so you become numb to telling your story, and it also becomes a lot shorter [over time]. It's good because I can share things with people that I otherwise wouldn't, but it's bad because I'm not sharing just because I want to.

What's been your experience going through the healthcare system?

I've been through the system in three different states and across the board what I hear from people is that it's tough. Two of the facilities I stayed at lacked people of color. As someone who's doing pre-med, you don't learn a lot of humanities and social skills. It's surprising how much cultural and social sensitivity some people lack.

When I was a teenager, I was a patient at a teaching school where they switched the resident every three visits. It was hell because they would have my chart but they wouldn't know me. By my third hospitalization, they realized my affect wasn't matching the severity of my suicide attempts. It took five years and countless doctors to get to this point.

There are good stories [out there] and good doctors, but it's really hard if you don't have great insurance or a lot of money. If you're good enough, most psychiatrists will have a private practice [instead of working at a public hospital], and you can't see them if you don't have a disposable income. A lot of the homeless or mentally ill with preventable crimes has to do with medicine. It's something so simple, but it just shows in this country [the system] can fail a lot of people.

In receiving treatment after your suicide attempts, what was helpful and what didn't work?

They do their best. They try to separate violent patients and non-violent patients, but they mean physical violence. I'm really sensitive to emotional violence and I ended up being triggered and dissociated all the time. The first two hospitalizations, I ended up a lot worse coming out of them.

The third time I think was good because they separated me into a ward for just college-age kids with similar illnesses. I saw people going through similar things that were closer to my age. But overall, I would say everyone needs better cultural sensitivity training. A lot of interns and doctors would talk crap about patients and they would be right there.

In terms of self-care, what are some things you are hoping to improve?

For me, it's learning how to channel and manage my [conditions]. My therapist describes it as watching a wave that's coming at you. It's giant, but you have to wait and let it pass you. Another thing is asking for help when I need it. People ask me all the time, "What can I do to help?" And to be perfectly honest, I don't know what they can do and I don't know if what they do is going to help. Sometimes I just need someone to listen.

What would you say to someone else with borderline personality disorder?

I would be honest with them and tell them there is no magic answer. You won't magically wake up one day and be happy. It's going to be really hard, but the pain you're going through doesn't always have to be that intense. It's okay to ask for help.

Look at mental illness like it's a physical illness. I have asthma. I'm not always wheezing or coughing and I don't always need an inhaler. But sometimes I do need medication and do things based my condition. You have to have that same mindset with mental health.

Look into resources around you. I didn't know about the free therapy and psychiatrists around me until I asked. I didn't know in New York City, if you go to a public hospital, you can get free medication. Even if you can't get medication or therapy, it's not the end of the world. There are other solutions. It's just going to be a little harder.

You're not crazy. It's not all your head. Your experiences are valid. You're simply different and that's okay.