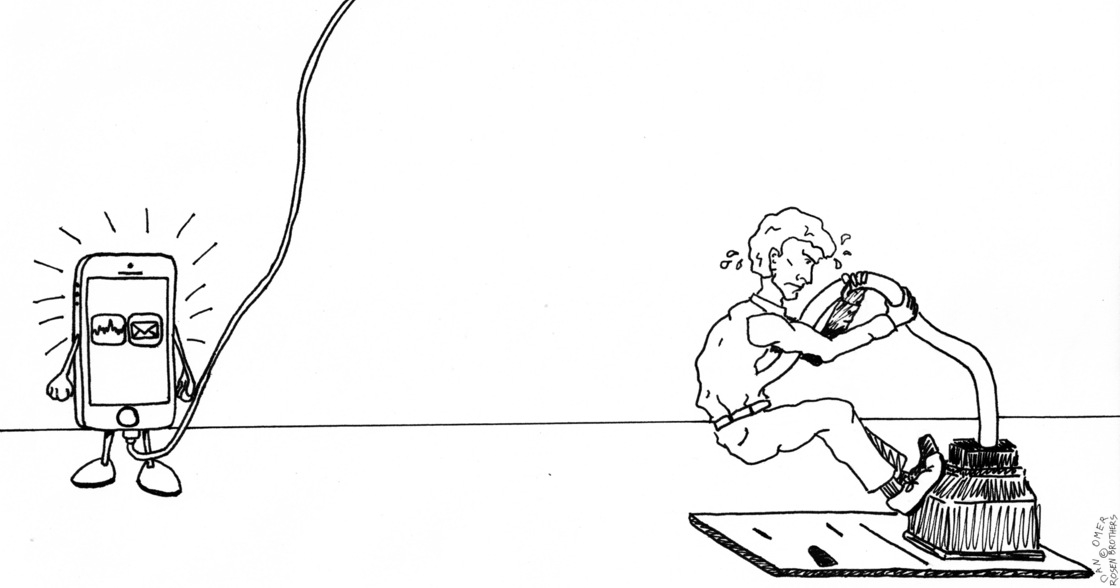 When I inform people that I have amputated that latest evolution in appendages -- i.e. that I do not lug around that which is commonly referred to as 'cellphone' or, in newspeak, 'smartphone,' and that by default my device is turned off and cached in a closet -- the response is both recognizable and predictable. First, a visceral, out of place exclamation of outrage:

"But what if there's an emergency?!"

This is never a calm inquiry -- more statement than question, less curiosity than accusation, full of condemnation and empty of concern. There is fear in it, there is name-calling in it, and there is a palpable anger that has been toggled from binary 0 to 1 -- and the closer the relationship with my conversant, the higher the anger quotient. It is as if ten steps have been skipped in the argument and we find ourselves anon alighted in the climax of Act II, clenching teeth as we enact drama without obvious root cause.

In a way, though, this outcome is logical. Cellphones have insinuated their way into our lives and are now integral. To give one up, to both disconnect from the Borg Collective and, in so doing, to implicitly insult and criticize the Borg's way of life, is an act of sedition. The members of the Borg, crossed and violated by my extreme act of unplugging, must overreact in kind.

I am prepared for this pugilistic intervention now. It used to throw me off, the violence in it, but now I slip the punch, now there is no instinctual gripping in the gut, no sudden physical preparation for an unanticipated fight -- only a dollop of bemused smugness. Yes, I know what is coming, and so I smile and say, perhaps, whilst playing dumb:

"What kind of emergency?"

Here I speak as if I were a foreigner, pausing before 'emergency,' not understanding the word I have been asked to wrestle with.

"Like, what if someone needs to reach you?" still at fever pitch.

"Then they will at some point."

I'm running lines at this point.

"No, what if someone needs to reach you right away?!"

My poor friend has reached exasperation.

"Well what if someone has an accident?!!"

This sighed out in final respiration!

We have become a people who elevate themselves to the levels of doctors and firemen. In fits of self-importance we ennoble ourselves without needing to go through years of training. We debase the word emergency so that now it applies to forgetting to buy soda on the way home holy *%!? so can you do it nooowwww please??? The definition has become inclusive:

"We all have emergencies now!"

Before the cellphone age, non-emergency workers did not customarily carry around beepers in case of emergency unless they were drug dealers.

Now, any slight variation or interference in one's life-pattern -- or lack of pattern, as is the more likely case for the cellphone tribesman -- can qualify as emergency, proof of the need for the almighty e-slab.

Never mind that in the two serious New York emergencies where a cell might have been useful -- 9/11 and Hurricane Sandy -- cells proved unreliable.

"What if someone dies?"

"Then I'll find out a few hours later."

"What if they're about to die and you have to rush to the hospital to say goodbye?"

Yes, this is how we should live life, with an infallible bat-signal always within view to alert us when loved ones near death. Don't jump in the shower... you might miss it.

"What if plans change and I can't make it on time?"

Here, language choice is key. Are plans now people too? Sentient beings running amok with humans at their mercy? Have we, in using devices, given up our own will? Or do people people, perhaps, change plans?

If I were writing this a year ago, I would have said that of course it is people people making the changes. And when a year ago I would hear, "...I needed to x, y, and z," as justification for lateness, I would roll my eyes and tell myself that the verb that should have been used was "chose." But now I would say that neither mercenary plans, nor selfish people people, nor bosses, nor parents, nor anyone else bear much responsibility -- it is the device. It is the device that at best acts as seductive enabler for, and at worst mysteriously impels, the schedule changes and choices:

Each step inexorably leads to the next, with cell swooping in at the last minute to save the day via the panacea of notification -- a solution to a problem of its own creation. This type of cellular circuit now reappears in an ever-increasing number of life's pathways and can only be bypassed through digital chastity.

I have found, in my phone abstinence, that:

a) Plans miraculously take mercy on their human underlings and change far less.

b) If you are nevertheless running late, I do not pine for your last-minute notifications, especially if I am already there -- I'd rather daydream than compulsively check my phone for updates on your progress up 6th Avenue.

"And if I have to cancel and don't show up?"

No punctuation is appropriate. Never has the human animal been so surprised, error signs accumulating behind frozen eyes.

"I am aware that that might happen, that I might sit somewhere for twenty, even thirty minutes and then leave."

In the entire time I've done this (in various forms for 25 months and counting) I have been stood up only three times. (Granted, I'm a bit of a loner.) Simply put, if you can't cancel you won't cancel. And if you know you can't cancel, you will be more mindful when planning.

Irrespective of frequency, being stood up is often shrouded with an irrational anxiety. "What if we don't meet up?" is treated as self-evident horror, without much thought going into what happens if the "what if?" happens.

Think about the panic one might feel, even if one has no appointment to make, when running towards a waiting subway train. One sees the doors make the first of their half-hearted closings, extinguishing hope, quickening one's pulse, before immediately springing open, renewing hope and panic for one last mad dash. But what is the result if the train is ultimately missed? Irrational panic subsides and the next train soon pulls in.

Once, as a beginning acting student, I set up a similar scenario as part of my 'emotional preparation,' thinking it would elicit panic, only to realize that without a serious consequence to missing the train, no panic ensued -- my brain called my bluff. And if there were a consequence to missing the train, my brain reasoned, I'd probably have arrived early enough to avoid missing the train. And so it is with planned meetings -- if the consequence of a missed meeting is not significant, who cares? Sure it's annoying, but not enough to justify a device-centered lifestyle. If the consequence is significant (your wife will leave you; you'll miss the midnight Iron Man 3), then the meeting is far less likely to be canceled without adequate notice anyway.

My three experiences of missed connections:

In this third incident, I actually called from a neighboring store's phone and emailed from a for-sale netbook in a cellphone store but could not reach the person due to a plumbing incident and phone malfunction on their end; I suspect there is a strong correlation between being enmeshed in a circumstance serious enough to warrant standing up an unfortunate, phone-less soul and not being able to use a phone to notify said soul anyway.

And the above is how the conversation inevitably starts, manifesting reasons that speak only to projections of self-importance: I have emergencies, people must need my help, must need to reach me at any moment, I am a mover and a shaker and have to constantly change plans, etc. etc. Then the conversation swings to the antipodal end of the egosphere: a fear of being stranded and alone, impotent and lost.

Go here for Part 2 of this series.