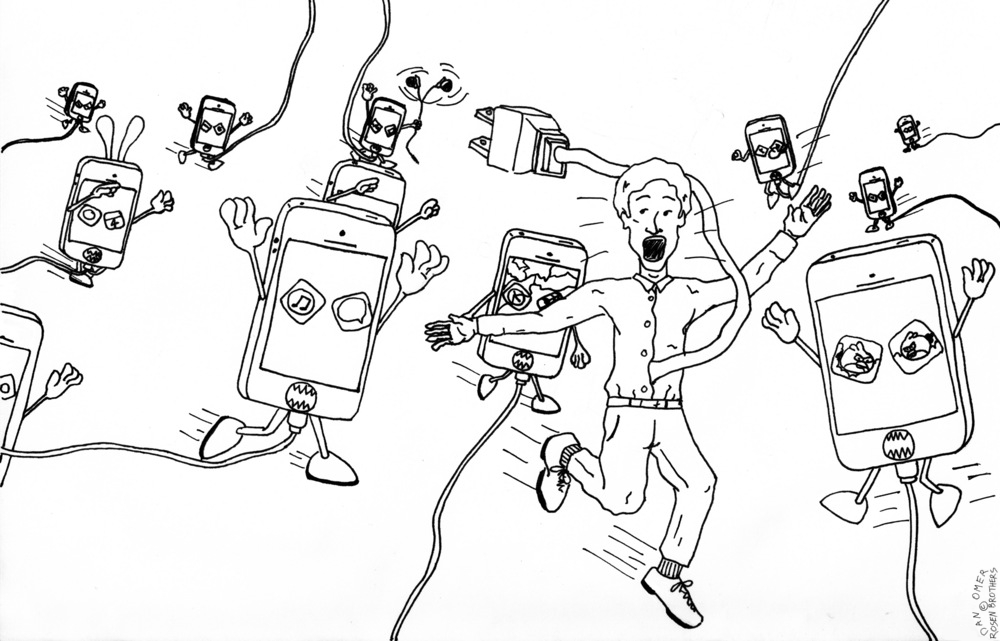 In Part 1 of this series, I relayed and discussed the surprisingly angry reactions I encountered upon relinquishing my cellphone. Extreme examples were reached for, as my interlocutors displayed no concern for the day-to-day and instead honed in on the exceptional. I focused on people's irrational worries about emergencies (just what are these perpetual emergencies we all supposedly have??) that require one to be reachable at all times and constantly shifting shifty plans that necessitate an ability to dictate out to the world at all times -- worries that I dismissingly classified as self-important. With this line of concern exhausted and punctured, the animal sprawling beneath it is laid bare, cowering now as the conversation swings away from self-importance to the antipodal end of the egosphere: a fear of being stranded and alone, impotent and lost.

Be forewarned, I will speak below not of that elemental human fear of loneliness, of the vastness of things outside ourselves, of our steady progression away from existence as Lacanian-type infants -- floating in the 'Umwelt,' unable to distinguish even our own bodily boundaries let alone contemplate selfhood or the divisions between 'I' and 'Other' -- towards a distinct realization that we each stand alone, and then further towards that moment when you sit at home in the dark, solus, with an endless night stretching before you, with no one to call or be called by, with nowhere to go and no one coming over, with only a naked desire to reach out...etc. etc. -- that might actually be interesting. How cellphones, in networking us, return us to our infant state -- dissolving us back into the 'Umwelt' (resist the urge to look this up; it doesn't matter), rendering each of us a primordial tangle of receptors to chaotic transmissions of internal and external signals, a fragmented self with 'Cellphone-User' (an image of self as e-device enabled and so whole and in control, with which fragmented self identifies and to which it perpetually aspires) as ersatz 'Ideal-I' -- would be loads of fun for us to "unpack." But that is not where the conversations with my interlocutors take us and so we will have to wait until later in the series for that discussion. No, I am afraid I will speak below of the supercilious version of the above, the exoskeleton of the thing. Please, trudge through with me, picking up the conversation midstream, where it was suspended by word-count concerns at the end of Part 1, as we begin with the mundane and proceed eventually to the slightly less mundane:

"What if I'm out of the house and need to find a restaurant what if I want to find out movie times what if we need to coordinate I can't."

"This could all be figured out before you leave the house."

Or even, horror of horrors, a day or two before. It's easier and far more efficient than last-minute scrambling for reservations for six on a Saturday night at a restaurant that makes everyone happy at a time everyone will agree to given other nebulous obligations all now have in place and that allows the group to make the as-yet undetermined movie at the undetermined theater at the undetermined time.

(Here you say "But!" and explain how your life is so hectic... I will ignore this.)

"What if I'm lost and can't figure out where to go?"

Again, you could figure this out before you leave the house.

"Look at a map when you're home. Print it out if you have to."

Then you could also figure out how long it will take you to get somewhere before you decide when to leave...you know, so you won't be late. Worst case scenario, ask a human stranger.

"What if one of your friends has a question, you should be there to answer it for them."

"What type of question?"

Here their mien and voice tense up, blood draining from countenance as brain recruits all available processing power to calculate potential pressing queries:

Be not afraid, the population of lions in the Scottish Highlands will not change appreciably before you reach wifi.

And, at this last failure to reason with me, extremes are reached for again:

"What if you fall on the street and hurt yourself and need to call for help or get hit by a car?"

"Well, if it's really bad then I can't call anyone and have to rely on other people anyway and if it's not so bad I can try to get help."

"What if there's no one else around?"

Here they think I've been checkmated.

"Then I guess I will just die. But before I do...tell me, am I not more likely to fall because I am looking down at a phone, distracted by text messages, than I am to randomly get hurt and have as my only potential savior my own phone?"

(Not only will help be called, but my crippled, bloodied, and mangled jumble of limbs will be instagrammed, vined, and retweeted many times over before help arrives.)

So obtuse are people with respect to the merger of self and device that more than one person phrased their fear -- for it is a fear for themselves, not a concern for my well-being, despite their pronoun choice, that drives the question -- of accident, without hint of irony, as:

"What if you fall down because you step into a pothole or something while texting?"

Of course, as in Part 1, the phone has necessitated its own use.*

"What if you're in a stairwell? What if you fall there? Like, it's slippery."

We infantilize ourselves. Will we really die alone in a ditch unless suckling on the electronic teat?

But if I really want to reduce a grown man or woman to tears, to a puddling mess of fear and anxiety, to brace myself for the confused whine of a child whose parent is momentarily out of view, to hear, "But -- but how will I find you?" then I suggest a meeting place and remind the person that I will be phoneless.

Will they amble about in the dark in broad daylight? Will they arrive early to make sure they don't miss me? I enjoy thinking of my companion-to-be, waiting for me, posture first hunched then wholly contorted, face buckled by anxiety, eyes hopping madly. I smile when I think of how we'll meet, how they'll be surprised when they see me that we have managed to locate each other at the clearly defined meeting place at the prearranged meeting time. It really is not that hard to pick a street corner or a restaurant, pick a time, show up, look around, and voila, there is the other person, also with a set of eyes, also scanning for a familiar face. And yet, upon meeting, their face transforms -- Glory! -- as if we have emancipated the South AND blown out those trick birthday candles. We have not accomplished the monumental. No Jabberwock hath been slain, no Kardashian silenced. We are not now "the most interesting men in the world;" just two schmucks living in the '90s.

When people assail me with these various scenarios that they view as making cells essential, what they do not seem to comprehend is that I understand exactly what I miss by abdicating the phone. These 'vitals' are far fewer in number and lower in impact than they think -- the recent addition of a dishwasher has helped my life far more than the loss of a cellphone has hurt it -- and I am at peace with what I miss because of the peace I gain. In the face of this peace, what I miss is a minor annoyance, gradually forgotten as new habits form and solidify. I now even take an anti-social, perverse pleasure in the missing-out, a solipsistic satisfaction in going my own way.

Of course, my version of life is not long for this world. Soon support will no longer be offered for disconnected living. Soon e-devices will have created a critical mass of problems to which they are the only solution. Soon payments will be made only on cellphones, no taxis will be hailed by hand, and food will be ordered at your table via the flirtatious-cute-waitress app. Soon one will be impotent to unlock the front door without the consent of iOS13. A flush will require a swipe, a faucet turn two blinks, and the heat a quick plea to Siri's granddaughter. And then will come the compulsory chip-implants for voting (you know, to prevent fraud). Yes, the time will come when life has transformed so drastically that living will truly be impossible without electronic self-augmentation. And when that time comes, when the line forms for robohuman conversion, I'll be last in line -- but I will be in line. Resistance is futile. (Just not yet.)

*(This circular fear is relayed to me in various forms:

"What if I'm walking at night and feel unsafe?" Does your phone have bullets? Otherwise, it is unclear to me how a phone would help you. Will you text before you get mugged, so that your body can be located the next day, or will you ask your assailant for a timeout, so you can use your phone-a-friend lifeline? In any case, from a societal perspective, now -- for the first time in history -- everyone must carry around objects worth hundreds of dollars at all times -- so there's a good chance your digital savior is what made you a target in the first place. Flashing that iSwag only makes it worse so whip out those iPhone buds to call for help at your own risk.

"What if my car breaks down and I'm stranded?" So the risk of your car breaking down (whether by mechanical failure or accident) in an area remote enough for you to run out of food and water before another driver passes or a worried family member calls the police but not so remote that it doesn't have cell reception is greater than the risk of accident via the distracted driving that will inevitably take place if your phone is on your person? And, again zooming out to a societal perspective, we are each now at greater risk from other phone-distracted drivers than we are from randomly breaking down where the hills have eyes.

In both cases there is also risk creep to worry about: a person is likely to proceed with less caution and planning -- and so get themselves into the very trouble the phone is meant to rescue them from, if it is even able to rescue them -- with the subconscious and conscious comforts of a cellular safety-net swaddling them.

If risk creep is not a concern for you, technology has non-smartphone options for your pedestrian and automotive safety needs: emergency locator beacons like the ones hikers use; GPS trackers whose data stream a family member can access online; Onstar and like services; if you must use a keypad: an old flip phone that can only make calls (and perhaps text) or a made-for-kids-very-limited-functionality emergency phone that can only call certain numbers. To save money make it a prepaid phone. Keep it turned off and tucked away, perhaps in your glove compartment. Give the number out to exactly nobody. These options should suffice if your concerns truly are about emergencies.)